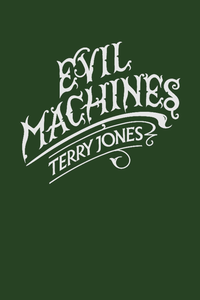 This book has 2 reviews with an average rating of 5 stars.

you have certain expectations when you pick up a book written by a favourite actor or author. For me I have watched and enjoyed Terry's writing from Monty Python, Ripping Yarns, the Python films, Crusades and his Douglas Adams based idea S.S Titanic.

From a phone that tells the truth, did that dear old lady murder her husband Terry? to a bomb that does house work, from the castle of imagination to the love machine you are treated to short stories that seem to be benign on the surface and then suddenly you're left smiling, chuckling even, as the whole episode escalates out of control. One minute a lady is telling a police officer about a phone the next she is a murder suspect, then a mass murderer, from one police officer to a 50 man armed police division and so on.

Terry never fails to disappointing, this book is a must for all his fans and fans of great traditionally strong writing and story telling. The myriad characters, the bizarre situations all echo back to Terry's Python days,the humour still lives on, and that lovely child like quality that makes adults not to ever want to mature lingers amongst the pages of evil machines and boy, they are really some evil machines.

Thank you Terry for yet more entertainment and long may it continue. Perhaps you could come over for lunch one day and examine my malicious sandwich toaster.

This book starts off as a collection of unrelated short stories about malicious and anthropomorphic devices. It reads quite like a children's book, which isn't necessarily a bad thing, as the wicked humour and Monty Python style silliness are united to make it an incredibly funny book: not to mention that the humour is aided by the fact that it isn't hard to hear Terry reading it to you in your 'mind's ear'. The humour is derived mostly from the nonsensical but somewhat haunting premise of 'evil machines' (hence the title), and Jones' casual humour kept me reading into the early hours of the morning. Furthermore, the book is surprisingly historically accurate for a fictional novel in terms of the machines themselves (for example “I'm a Class 4MT BR Standard No. 75027!” hooted the train. “Nobody can call me ridiculous!”), which – in my opinion – only makes it a more satisfying read. What makes the book particularly enjoyable, though, is the fact that some way through the book, it suddenly becomes a novel with a flowing storyline, which is a genius transition, and helps to make the book's architecture rather unique. It is partly because of this that it's difficult to place 'Evil Machines' into a particular genre. It somehow straddles the line between adult fiction and children's fiction, combining sometimes complex language with an almost Roald-Dahl style tone. There are a couple of loose ends which do not get tied at the end of the book, but these can be forgiven due to the quirky characters and joyfully bad jokes present throughout the book. It is indeed, as the blurb says, 'brisk and cheerful on the outside, but edgy and uncomfortable within'. To synopsise, 'Evil Machines' is a light-hearted but decidedly disturbing reminder that in the world of Terry Jones, nothing has to make sense.