Getting to the meat of it

Professor Richard Foster of Yale University has discovered that the average longevity of a company in the S&P 500 has gone down from 61 years in 1958, to a scant 18 years today. Based on this rate of churn, the implication is that within about ten years, over two thirds of the companies on the S&P 500 will be businesses we've not even heard of now.

Perhaps now more than ever we need to celebrate the stability of those businesses that are in it for the long haul. One such is the business that I've become fascinated by as the Established project has developed, the butcher R.J. Balson & Sons of Bridport. They rejoice in being the UK's longest surviving family business, and on Septermber 15th 2015 they celebrated their 500th birthday. No, you read it correctly - their 500th birthday. If you're looking for another statistic (and even if you're not), I can tell you that this has involved the baton being passed between 26 generations of the Balson family, which is arguably every bit as miraculous as the 500 years figure, especially when you learn that a vanishingly small percentage of family businesses make it even as far as the fourth generation.

More than once, I've wondered what it must have been like to grow up as the latest Balson to carry the torch. If you've had 25 generations before you, all in the family business, at what point would it dawn on you that your own future is pretty much mapped out? I can imagine that Richard Balson, who modestly describes himself as the current custodian, could have had a worthwhile conversation with, say, Prince Charles, back in the day, and they'd have found some common ground. Of course, the House of Windsor can't match the Balsons for longevity, and a visit to their one butcher's shop is instructive when you're looking for clues as to how they've done it.

I won't give all of that away here, because the answers are in the book, but I will say that it was with no small sense of anticipation that I walked down the high street in Bridport on that auspicious day last September. I wasn't sure exactly what to expect, but I suppose I did expect more than just a small amount of bunting decorating the exterior of the shop. There was an edge of disappointment that there were no film crews, bands, people dressed in Tudor costumes handing out roast partridges. Instead, I found...a working butcher's shop.

So maybe there's one clue. 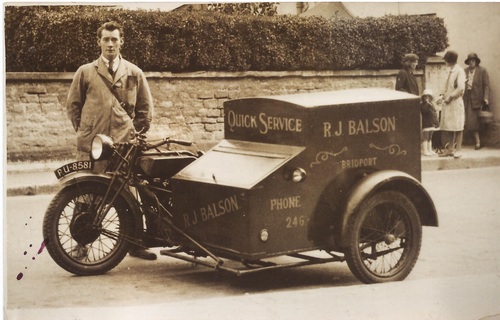 This post by Martin Lee comes just after I read Lucy Kellaway in the FT. Lucy, the scourge of corporate speak, has a new linguistic hero. His name is Wan Long and he runs the world's biggest meat producer Shuanghui. Lucy likes him because he writes "What we do is kill pigs and sell meat". An example of concise clarity expressing a business's purpose. I wonder if there's a similar thread running through the Balson business?