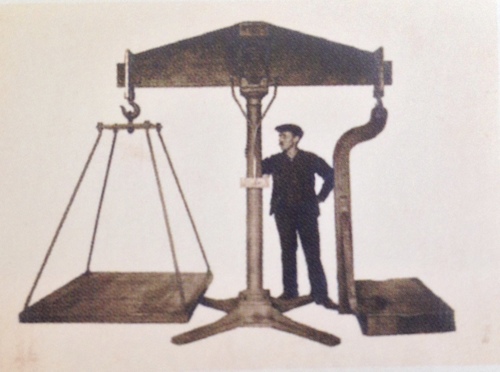 There’s a surprising contemporary twist to my company’s tale – a twist that nearly put paid to the chapter being written at all.

I had picked Scotland’s oldest family business, John White & Son, scalemakers of Auchtermuchty, as my subject. Founded by a Fife blacksmith in 1715, the weighing machine firm was currently being run by the great-great-great-great-great-great-grandson of the founder, after 300 years of unbroken family succession.

I made contact with them, and almost immediately discovered that the wife of the managing director had briefly helped look after my young children, some 20 years previously when I had just returned to live in Scotland. Such are the coincidences of life in a country of just 5 million people.

But that’s by-the-by. I visited them and they agreed to be featured in the book. Then, a few weeks later, I received an email saying that there were developments afoot in the business that would clash with our publication schedule. Alas, they would have to withdraw.

Curses. I went looking for another candidate, and found one. All proceeded swimmingly until the day before I was due to visit my new prospect. Another email arrived. The managing director had suffered a family crisis and everything was on hold. Double curses.

By this time our publication scheduled had slipped. I’ll try John White & Son again, I thought, just on the off-chance that we might be able to synchronise. And so it proved. Now the impending developments were to have developed, so to speak, in good time for piublication. The green light was back on.

By the time Established is out, an historic change will have taken place among the weighing machines in Auchtermuchty. And what will it be? You’ll have to read the book to find out.