I intended to make a big tuna niçoise salad for our neighbours get-together the other night, but Marsey and Jason in Steve Hatt the fishmonger pointed out that, due to bad weather in the Indian Ocean, tuna had been a little hard to come by. That’s the kind of food nerd info that I love. .

So I went with salmon instead. I bought one large piece and Marsey skinned it for me. I like to cook the salmon in one big piece if I can, and break it up after it’s cooked because it stays juicy that way. However, if you want a crispier texture, break up the salmon before you fry it.

Before cooking, I marinated the fish for a couple of hours in a mix of lemon juice, soy sauce, toasted sesame oil and grated ginger. Then I heated a small amount of olive and toasted sesame oil (half and half) in a frying pan and quickly fried a dessertspoon of sesame seeds until they turned dark brown, before placing the salmon fillet in there. I started out with the oil very hot, then, after about 2 minutes turned the heat down and placed a lid on the pan. After about 5 minutes I took the lid off and turned up the heat again for another minute to drive off the excess liquid and give a slightly crispy texture to the underside of the fish.

Then I broke it up and gently placed the pieces, along with halved hard-boiled eggs on top of a big, dressed salad of green leaves, halved baby tomatoes and cooked green beans.

Here it is. And thanks, again, supporters! Please spread the word. xx 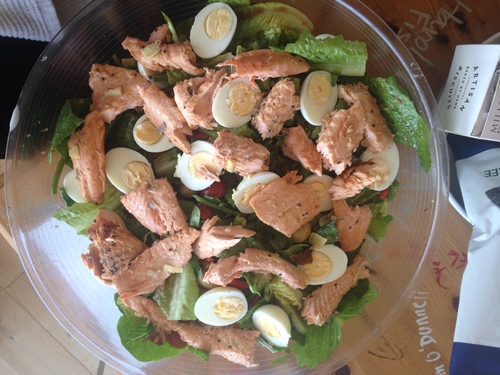 A digital version of the images with captions.
Buy now
£20  + shipping
48 pledges

A box of 100 postcards (50 recipes, 2 copies of each), digital version of the images with captions.