Work is a Scam (Friendly Anarchist)

Here's an essay I wrote earlier this year. I originally did so for the widely-circulated Anarchist magazine Fifth Estate. I was invited by a friend of the editorial team to write about the parallels between Anarchism and my home-grown metaphor, Escapology.

The essay twice quotes Anarchist writer Bob Black, who was apparently blackballed (pun intended) by Fifth Estate. The kibosh on his work, it was clear, would extend to my quoting him. The office politics of anarchists being no concern of mine, I felt I should be allowed to quote whomever I liked. I politely withdrew my submission. It wasn't as if I had a long-cherished dream of writing for Fifth Estate.

Flash forward to last week. Looking for ways to draw attention to the Escape Everything! fundraising campaign, I recalled that New Escapologist contributor Fabian Kruse runs a cheerful website called The Friendly Anarchist and that he might welcome a guest post. I sent him this essay, disclosing that it was old but unpublished. To his absolute credit, Fabian posted the piece. To him I extend my gratitude. Three cheers to Fabian and Friendly Anarchism.

Regarding the campaign, we're on 41%. Not too shabby. But we won't see the book in print until we hit the big 100. So I have a request: please tell someone else about this book--a friend, your Twitter followers, perhaps someone you think is in especial need of an escape from work or from consumerist hell--and encourage them to pledge. For this, I offer my thanks.

Anarchy and Escapology (The Friendly Anarchist, 2014) 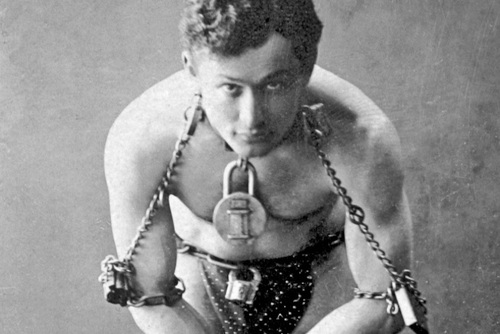 Work is a scam. It's a forty-year sentence to wage slavery. Who would sign up for that? It turns out, almost everyone.

Belief in the twin lies that "the devil makes work for idle hands" and "work will set you free" is maintaining a terrible status quo, gradually destroying the natural habitats of the world's diverse and abundant life forms, and trapping the well-meaning majority of us humans into lives of stale drudgery.

If you're unlucky enough to have a job, you'll know that work takes up all of your time: when you're not actually at work, you're probably travelling to or from work, preparing for work, or recovering from work. Quite often, you find yourself dreaming of work, only to be interrupted by the alarm clock waking you up to go back to work.

Your home--historically a safe haven for relaxation, husbandry and merriment--is reduced to a fuelling station for work. Work, work, work. Would it not be wonderful if we were no longer expected to go to work?

Almost every ideology and political party sees work as good. Conservatives think hard work and competition are the solutions to everything. Socialism is obsessed with work and finding jobs for everyone. Anarchist writer Bob Black states the problem thusly: "Unions and management agree that we ought to sell the time of our lives in exchange for survival, although they haggle over the price. Marxists think we should be bossed by bureaucrats. Libertarians think we should be bossed by businessmen."

But in the gaps between these ideologies is a proud tradition of rebel thought, which mercifully sticks up for those who'd rather not work.

Bob Black wrote that "work is the source of nearly all the misery in the world"; philosopher Bertrand Russell said "there is far too much work done in the world [and] immense harm is caused by the belief that work is virtuous"; and merry rebel Tom Hodgkinson of the Idler magazine and Idler Academy encourages us to reclaim our leisure time from the corporation and to say "life is absurd, be merry, be free".

Before these modern thinkers were ancient philosophers like Epicurus and Seneca and Diogenes, all of whom felt that work for work's sake was a fool's errand, that status and wealth were unworthy of single-minded pursuit, and that it's aginst human nature to suffer so persistently when the best things in life come without effort. The central place of work in modern life would have baffled the Ancient Greeks and Romans. Why would anyone sacrifice the good life--a life of voluntary simplicity, spiritual improvement, intellectual contemplation, and sensual pleasure--for soulless drudgery?

In 2007, I set up a magazine called New Escapologist, which sought to continue this discourse about alternatives to the work system. We look for ways to escape work and the various other things about the consumer economy which prove so depressing and all-pervasive.

New Escapologist seems to be onto something. Even though we're just a small-press publication with no funding or professional staff, we've sold thousands of copies worldwide and we're getting ready to publish our eleventh edition. I suppose the secret of our modest success is that we're one of few publications (though the Idler is the best) to acknowledge the obvious truth that the devil does not make work for idle hands and that work does not set anyone free.

The reason that the vast majority of us go to work is to make money to pay the rent (on property built on once-common land, no less) and to pay for material goods we're told are needed for a good life. We do not work because we enjoy it and we do not work because it is virtuous, though maybe some of us have convinced ourselves to vaguely believe in a combination of the two.

Any semblance of dignity or craftsmanship has been bashed out of today's work by the division of labour, by technology that allows anyone to do anything regardless of their abilities, and by the new consumer economy which preys upon our weakness and fatigue after work, and fills us with insatiable desire. There is no dignity in working for a supermarket or in an office or in a call centre. There is no dignity in finding conniving new ways of selling junk to your fellow human beings.

The majority do not work to grow food or heal the sick or push the envelope of what humanity is capable of. (We will always need farmers, nurses, and scientists and we should reward them better than we do). The majority now are dissatisfied wage slaves, conned or forced into doing what we do so that we can pump wealth back into the system, further feed the obese rich, and have cell phones and cars and cable television and all the rest of the grubby things that help to perpetuate our malaise.

New Escapologist would be overjoyed to witness the end of work. This, we think, closely echoes what Anarchists want.

How so? There's a combination of oppressive forces that work against the majority. Anarchists tend to call it The System or The Machine. Ken Kesey called it The Combine or The Thing. Whatever we call it, this strong force lends itself well to a very particular way of life and works hard to make the alternatives look ridiculous. If you live under the control of the strong force--as almost everyone alive today does--your life will look something like this: eduction>work>retirement>death. If your life doesn't look like that, you're probably considered eccentric or subversive.

Our individual experiences on this treadmill will differ, but not by as much as we might imagine. Whether we attend a good school or a bad school, whether we're employed to pick potatoes or command armies, the treadmill rattles along in the same direction.

Stepping off this treadmill is the only way to escape the system. Were enough of us to step off the treadmill, the strong force would lose its power. In such a scenario, the system may not be "smashed" but at least it will be cut back enough to feel human and manageable again. Small is Beautiful.

In case you're not certain that the treadmill lifestyle is actually bad or if you're under the impression that there's no alternative, let's consider a few of the problems with it. In the West it makes us work in offices. In the East it makes us work on assembly lines. In every direction it molds us into wage slaves, makes us miserable and fat, corrodes our willpower, leaves us spiritually dissatisfied, disconnects us from nature, obliterates our individual free agency, and ultimately exhausts us entirely. Thanks to the consumer economy that has grown up around the treadmill to further exploit our human energies, the gap is widening between rich and poor, the rainforest is being incinerated, our planet's atmosphere is being heated and poisoned, and an estimated 200 to 2000 animal species are yearly condemned to extinction.

At New Escapologist, we believe that the weak link--the Death Star design flaw--in the treadmill is what many would imagine to be the strongest and most inevitable: we believe that we can (and should) put an end to work.

Without work as we currently understand it, the rest would fall apart. Without work, schools would no longer have to be drone factories. Without work, we wouldn't have aimless, poverty-stricken retirements. Without work, we'd have willpower, unrationed daily freedom, creative integrity, and richer lives both in public and inside our own heads. No more anxiety. No more competition. No more struggle. People would start coming up with their own ideas instead of being told what to do.

All of this will seem idealistic or unrealistic to people living on the treadmill, but there are hundreds--thousands!--of example alternatives that work extremely well. New Escapologist celebrates these cases and shows that another world is possible.

Go here to pledge towards the book.
Go here to read more from the Friendly Anarchist.

An emotional response to first reading of this article: I love the siren voice, but it is surely at best a symbiotic state that is there to be achieved - at worst a parasitic one. Not everyone is intellectually and emotionally equipped to achieve that admirable state of 'self sufficiency' and that makes it only achievable for those relatively few that can. If everyone could and would then that would lead to anarchy a febrile and dangerous state leading through 'might is right' transitions to some unknown but depleted state. Meantime we should not forget the labouring masses in the ant-heaps of the world that make possible power stations, satellites, computer chips, transport, defence and order as well as the despicable material goods such as iphones, laptops etc. They also serve ... - in the ant-heaps, while we happy few could stroll in the sunlit uplands.

Sounds pretty awesome. With regards to the above comment, I'd say that as long as those in the sunlight have empathy for those who are not, there won't be a problem.