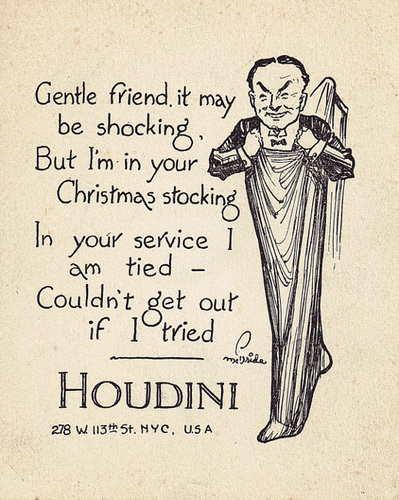 Unbound have kindly granted a 20% discount on Escape Everything! and I'd like to recommend it for Christmas stockings the world over. It's a nice-looking hardback with a colorful, Victorian-looking cover, so no bad thing to unwrap on the big day. It's also filled of the sort of promise and resolve useful and stimulating at the start of a new year. To get the discount, simply enter the promotional code escape16 into the system at checkout.

The New Escapologist Patreon campaign inches ever forward. I’m proud of what’s already been achieved, but perhaps I’d hoped to be further along by now. Come on folks, join the party by subscribing to the new essay series for as little as £1.

Maybe I should give you some more info about what the essays will look like. Generally speaking, they’ll follow this structure:

It approximately follows the format of Houdini’s later shows. He’d stage three different acts in one night: a magic show, a lecture, and an escape.

Each will be something in the region of 2,000 words: more substantial than a mere column but a little more easy-going than an Aeon article or a Guardian long read.

I’m already working on the first essays and I’m very proud of what I’ve written so far. Entertaining, researched and practicable if I say so myself. It might be the best Escapological writing I’ve managed to date, possibly because it comes after useful feedback from the book and possibly because I’d be quite embarrassed not to give the patrons something for their money.

So, yes, I’m rattling the can again — by which I mean asking for money more than shaking my bottom, though if you’d like to see the latter it can probably be arranged, perhaps as an exclusive bonus for patrons. If the essay series sounds good to you, please join us at Patreon. If you know someone who you think might benefit from the essays or are simply into making things happen with the magic of crowdfunding, please let them know about the project too.

Together we will conquer the world! Or, you know, make it a little bit nicer.

Go here to join us at Patreon.