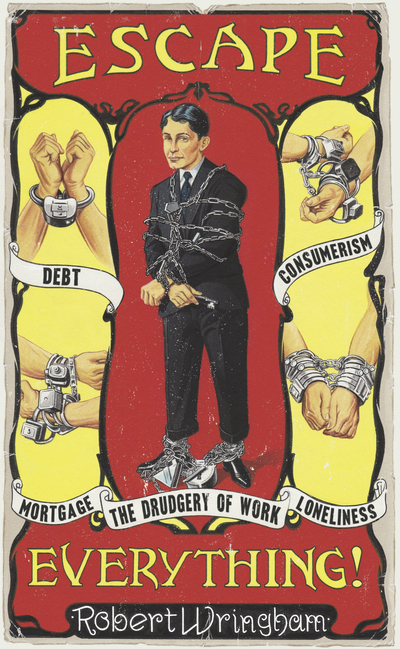 Non fiction
You made Escape Everything! a reality. It's available in all good book stores now.
$8
196 pledges

Houdini! The handcuff king! He freed himself from jail cells, straitjackets, packing crates and — on a particularly beguiling evening — the innards of a dead whale. His sensational act struck a chord and made him famous throughout the Western world, not just for the inherent feat of escape but because of what it represented: liberation from the trap of the burgeoning consumer economy of the 1900s.

A century later and we’re still in the trap. 80% of us hate our jobs yet we reluctantly spend 87,000 hours at work before dying. Some of us even die at work. We also spend 5,000 hours sitting in trains and buses and traffic jams, getting to and from work, and an untold number of hours preparing for, worrying about, and recovering from work. Despite all this toil, most of us are in debt because we’re so keen to reclaim our dignity by buying big homes and then filling them with stuff.

The trap is stronger than ever before but few have the Escapology to deal with it. Many latter-day Houdinis have drawn attention to the trap but few have done anything about it. Since 2007, through the pages of his small press magazine New Escapologist, Robert Wringham has been studiously examining the mechanisms of the trap, exploring the alternatives to it, and collecting stories of escape attempts. Finally in Escape Everything! he shows how we might break free.

Ladies and Gentlemen, we offer you escape. Escape from work, escape from consumerism, escape from loneliness and despair. This book shows once and for all that escape is possible for those who want out.

Limited edition hardback and the ebook edition
View all 4 rewards