Is texture the new fragrance?

Architecture | Humour
You made Epic Space a reality. It's available in all good book stores now.
$8
85 pledges

A print of The Future London Skyline, illustrated by Moose Allain and signed by Moose and Ian, labelled with an extended list of the Skyscraper Nicknames featured in the video. Plus everything up to the personalised level. (25 available) 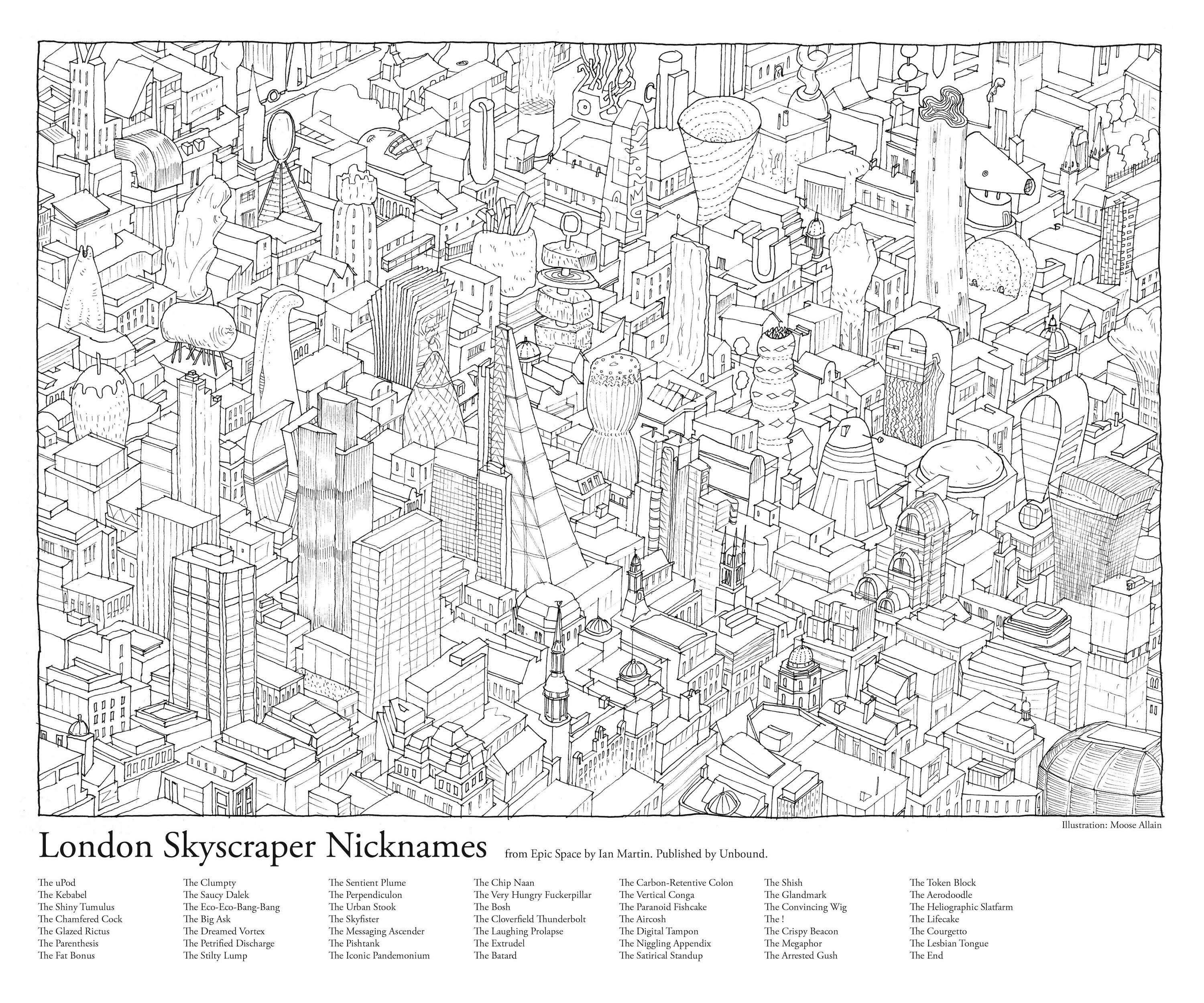 Everything up to the Personalised level, plus your name listed at the front of the book as an Enlightened Patron
$150  + shipping
10 pledges

Two tickets to a boozy launch party, plus everything up to the signed level
$225  + shipping
1 pledge

Dedicated by an Epic Space character

Everything up to the signed level plus 100-word handwritten satirical dedication in the style of one of the characters featured in Epic Space:
• Rock Steady Eddie the fixer.
• Amy Blackwater the ecomentalist in a balaclava
• Arts correspondent Darcy Farquear’say and his dachshund Bauhau
• Dusty Penhaligon the conservactionist
• Isis de Cambray the magic arborealist
• HRH the Prince of Wales
• Beansy the nanofuturologist
• Phil Cluster the developer-gangster
• The Hon. Aneas Upmother-Brown and his swarm of pet bees
• Loaf, the current Mayor of London
$375  + shipping
8 pledges

Lunch at the Shard

Have lunch at the top of the Shard with Ian, during which he will point out famous London landmarks and take the piss out of them, plus everything up to the signed level. Limited to ten people

For more than a quarter of a century, Ian Martin has written a weekly satirical column in the architectural press. His first column appeared in the Architects' Journal in 1990. Its theme was the cultural significance of the boozy lunch.

Although the column started life as a sarcastic in-house joke for architects, it has blossomed over the years into a surreal take on contemporary culture. As Martin sharpened his writing skill on shows such as Time Trumpet, The Thick of It and Veep (for which he won an Emmy in 2015) so the column reached out to a more general audience. Weird and hilarious, it now has an enthusiastic cult following.

Epic Space is an anthology of the best columns of recent years. Each week is written in diary form, describing the working life of an amoral consultant with powerful friends, incuding members of the Cabinet and HRH the Prince of Wales. Its world is a woozy version of our own. But one in which Martin and his friend, the nanofuturologist Beansy, can invent Kryptogel – a new building material developed using ‘hard air’.

In this mad world, the property wing of the Church of England builds buy-to-let almshouses while ‘bouncy mega-mosques’ have helium-stiffened minarets. There’s a proposal for a 1:1 map of the whole world. An arts correspondent is sacked by a Sunday newspaper and replaced with his own overdressed architectural dachshund. Soot becomes a valuable stock market commodity. A hipster skyscraper is called the Blard. A massive analogue underground Cotswolds is mooted. An ambitious plan is hatched to ‘turn the North around’ so that it faces south. Big questions are asked: Is Texture The New Fragrance? Is Modern Modernism Just Post-Modernism But With A Neo-Modernistic Coat On? How Fat Is Your Faceprint?

And reassuringly, there are still plenty of boozy lunches.