The End of Magic

A sweeping fantasy of magic's ending; a new name to set alongside Jen Williams and Den Patrick.

Proof Reading - it's all about talking to yourself...

The proof pages for The End Of Magic arrived at the end of last week. Unbound sent them to me as a PDF, and the temptation was to read from the screen, but I was about to take a bit of advice first given to me by my friend and former audio director at Orion, Pandora White.

Pan said that, almost without fail, whenever she recorded an audiobook they would find typos and errors throughout the book. This was after the edit, the copyedit, the proof read and the final check by the author. Usually, by the time the audiobook is recorded the physical book has gone to print and it's too late to do anything about it (until a reprint). Errors would always slip through. Except...

... when the author took the time to read the book out loud.

Page by page. Word by word.

So I figured what the hell and made a start last weekend. It's taken me all week, muttering to myself during every lunch break at work, but it's done the job. I've found 40+ errors in that time... 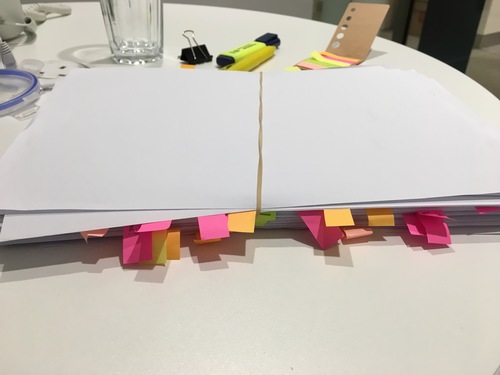 They were mostly small typos and missing words, but also a few sentences that were just too long or made no bloody sense whatsoever. Had that version of the book been published I would have been kicking myself, but now my soft and plump derrière can rest safe in the knowledge that I've done all I can to keep it from further bruising.

And that's it. I've sent the changes on a marked-up PDF and now Unbound will make those corrections before going to print.

Next - I'm hoping - will be the cover art. Much excitement and anticipation ahoy!