It is the time of year when I dive into our shed and rifle through all the gardening tools to dig out the camping equipment, load the car to the roof and head off to Hay for the bank holiday. I've been taking the kids every half term since 2011, and although they are now all teenagers, and one has left home, it is still an important family experience.

This year had an extra thrill to it, as I had managed to persuade our regular campsite, Wye Meadows (owned by a local family, now managed by Pillow Festivals and Camping) to let me organise a reading. Alice Jolly was also staying at the site, and so we were able to do a combined event. It is a writerly ambition to one day be on the main stage, but since I've spent the last two Hays busking through town telling people about Echo Hall, speaking anywhere in Hay feels like progress.

It was supposed to be a leisurely start, but shortly after our arrival the thread in the central set of tentpoles split, scattering them to the four wind. It's always a fairly stressful venture getting the tent up, this took it to a whole new level. Eventually, the poles were threaded (thank you Pillow staff), but back at our pitch we discovered several bits were missing. Usually at this point, the ex Scout in the family comes good with an innovative solution, but since she was home studying for A Levels, the rest of us had to get busy with  duct tape and a couple of silver poles we had kicking around.  It looked quite good at 6pm, but after a night of thunder and rainstorms, had a distinctly saggy middle. Still we stayed dry, managed get to Andrew Davies (watch out for Les Miserables on the Beeb next year, it's going to be great) and I caught up with Alice and my friend Angel, so all was well... 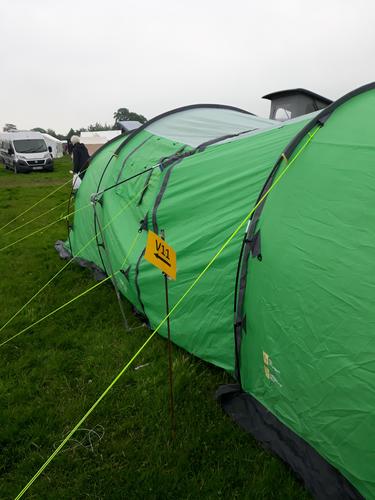 The beginning of Day 2 was distinctly soggy, resulting in lots of leaks in the centre, urgent repairs in the pouring rain, and a flat battery in the car. (Thankfully the lovely Pillow team were able to help us with that one too). But after lunch the sun shone, and we walked in to town and bought some jeans for my son from a fantastic new shop Charlotte of Hay which sells a great range of clothes at affordable prices. (£100 being a little steep for trousers that he will shortly grow out of, even if they're waterproof). Debs, the owner, also kindly bought two copies of 'Echo Hall' which she is selling in her shop, thank you Debs.  Festival wise we saw Suzanne O'Sullivan discussing neuroscience and Emily Wilson on her stunning translation of the Odyssey. That range of subject matter is exactly why I love Hay so much.

Thankfully the rain didn't appear, so we read in the late evening sun to a small but perfectly formed and very interested audience.  It was lovely to see Xander and his wife Miranda, who popped over from the main site. The only annoying thing was realising I'd managed to clash it with John Mitchinson talking Kathy Burke about the Anthology of Short Stories for Grenfell which I was very sorry to miss. Still it was a nice evening.

Here I am reading from 'Echo Hall'.(Available to order from all the best bookshops  if you're looking for a good summer read) 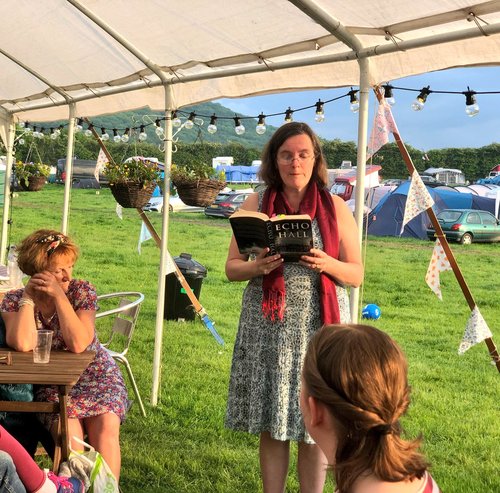 And here's Alice reading from Mary Ann Sate, Imbecile, which is going to be out this month. It's a wonderful book about the life of a woman condemned to the workhouse, as so many were in the 19th Century. I predict it's going to be big as it resonates with the austerity we are witnessing today. So order your copy now! 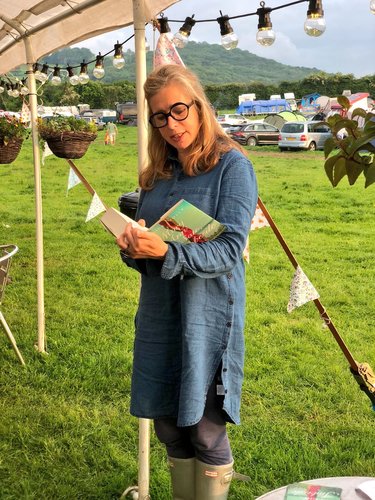 Tuesday was another fine festival day. Fiona Sampson on Mary Shelley was fascinating and Frances Hardinge on her latest novel 'A Skinful of Shadows' was very entertaining. But the best moment of the day was getting last minute tickets for Margaret Atwood half an hour before the event. It meant postponing meeting my friends John and Gillian for an hour, but they were very gracious about it. And Atwood was predictably awesome, speaking to a packed tent, with a row of handmaids in front of her. Really, really worth a watch on i-player. Her talk really made me think afresh about 'The Handmaid's Tale' which I've just re-read and 1984 which I'm re-reading.  More thoughts may follow.

So that was Hay 2018 for us. As always amid the rain and mud we heard amazing speakers, and this year I got to read even if it was over the road. We may not have had the audience of Margaret Atwood, but I seem to remember that when she started out she too spoke to small groups of people. It takes time to build a career, so you never know, in twenty years time, perhaps I'll be on that big stage too...

Thanks for lovely description of Hay!
Have still to finish reading Echo Hall!!
(My life is overcrowded with lovely and not so lovely things....)Have started it and eagerly restarted it several times - not got beyond page 60 yet!will report when I eventually reach p375!!!
xxxxx