Every May half term, I load the car to the brim, stuff our children and at least one of their friends in the remaining cracks and head off to Hay-on-Wye for the annual festival. It has become such a family ritual, that the offspring who are now all  in their teens, have already laid down plans for how we manage it when they've left home. It's always a great few days - one of the highlights of the year.

This year was no exception. Although in 2015 we had good weather, 2016 was even better. The sun blazed down solidly, reminding me that camping is fun when your only concern is slapping on sun tan lotion rather than wading through the mire created by a deluge. The talks I attended by Yanis Zaroufakis,Russell T Davies and Maxine Peake and Sara Pascoe were excellent. And I also finally managed to get to Letters Live, whose stellar line up of Benedict Cumberbatch, Maxine Peake, Tom Hollander, Olivia Coleman, Louise Brealey, Toby Jones and Mark Strong made me cry with laughter, cry for real, and then cry with laughter again. One of the best events I've been to in my 6 years of Haygoing.

Letters Live was particularly special, because of course, Letters of Note is an Unbound book. In fact, it was through following Shaun Usher's brilliant twitter feed, that I first heard of the project and of Unbound. My copy of the first book is a treasured possession, containing as it does, Virginia Woolf's heartbreaking suicide letter, and a more cheery one to a young girl of the same name with the immortal lines,  'yes, Virginia there really is a Santa Claus'.

My other Hay Unbound connection is that two years ago I saw Mark Rylance reading from Paul Kingsnorth's magnificent Unbound novel, 'The Wake'. He was accompanied by Paul giving a fascinating history of the period in which it set. I already knew of the novel as my friends Hugh and Zoe are friends with the author, but it was that Hay event that persuaded me to buy a copy and fall in love with the book.

So it only seemed right that now I am an Unbound author,  I should make the most of being at Hay and take my pitch into the real world. Due to the festival's advertising rules, I wasn't able to come onto the site, but that didn't matter. Because with the sun shining down on the Wye Meadow Campsite and in the town, there were plenty of book lovers wandering about interested in what I had to say.

Although I love live events, I'm much more shy when it comes to 1:1 interactions.To give myself courage, I created my very own sandwich board, armed myself with a copy of the book and leaflets, and set off with a mind set that sometimes one has to make a prat of oneself for one's art.

Sunday started hesitantly. I  gave a few leaflets out at the campsite before walking to town looking for a likely place to speak.  Unfortunately the townsquare was full of dancers and the Castle looked like it had a food festival going on. Eventually, I settled on the bus stop, but the shuttle buses to the festival are frequent and as I read from the book, my captive audience suddenly upped and left. Several took leaflets and wished me well, so I was bold enough to ask if I could speak outside the Cinema Bookshop. There weren't many people about, but the few that were listened politely enough and agreed to look me up.

After that, I had a bit of shopping to do, and in doing so discovered that my board generated a lot of conversation. The locals were delighted to discover that there was a Hay connection of sorts. Arthur's Stone, which features heavily in the novel is inspired by the real (much smaller) Arthur's Stone in nearby Bredwardine. These discussions energised me enough to walk back to the town square, where several stall holders were happy to take leaflets and one took a few for his stall. I also discovered a new literary magazine, The Keep, was launching to coincide with the festival. The magazine focusses on literature inspired by Hay and the Welsh Marches and is run by a friendly crowd. We had a great chat about writing and wished each other well.

I'd walked about so much by now, I was beginning to flag, which was the perfect time to run into my friend Louisa, and the excuse to stop for a cup of tea. On the way back, I managed a final bit of pitching as I helped a woman find her way to the festival and we chatted about Unbound, and then I met a couple of teenagers who were fascinated by the idea of crowdfunding. All in all, it felt like a good start.

Emboldened by Sunday, I strode off to town more confidently on the Monday, arriving at the townsquare to discover that there were lots of people about and no dancers to distract them. Coincidentally there was also a war memorial. Since the Whetstone war memorial also features in the novel (like Arthur's Stone, it is one of the locations that is visited repeatedly by the characters), it seemed a good place to stand. So I shouted at people until a few came over and then fixed them with my best Ancient Mariner stare encouraging them to stay. Most walked off as I read relevant sections, but a few stayed, including the teenager I'd seen the day before. And when I repeated it later, I had one man stay till the end. Afterwards we chatted for a while and he asked if it the Hay-on-Wye war memorial I was describing. It wasn't but as we spoke, it was nice to spot one Davies on the real war memorial, echoing the fictional Davies men mentioned in the book.

All in all Monday's pitching filled me with great cheer as I had several interesting conversations with potential readers, who all thought the book sounded interesting. I also received a lot of encouragement from several lovely people who wished me well and from an unknown woman who took my picture.

So by Tuesday, I thought it was time I took someone with me to record my wandering bard act. Luckily, my daughter Claire was free and we began optimistically enough at the campsite, where we shot me speaking in one take. I gave a few leaflets out to fellow campers, encountering one who'd seen me reading the day before, and a young girl who read my sandwich board with interest. She also decided that the Unbound logo character Greg  I wonder if this will catch on?

Alas (1) when we reached town,  there were fewer people about than the previous day and they all seemed to be in a rushing, going home sort of mood. Worse, from Claire's perspective, was that I STILL shouted out for punters, though answer came there none. She wisely rushed away from her embarrassing mother, only returning when I gave up and started handing out leaflets. Alas (2) we couldn't find people willing to be filmed and Alas (3) Claire's phone ran out of battery anyway. So the final busking session goes unrecorded, and since we can't find a way to download the bit of film that introduced it, all I have is this picture, to prove I'm not making any of it up. 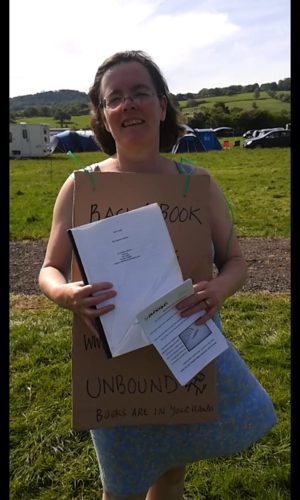 Pitching Echo Hall to blank strangers was scary, hard work but on the whole, a lot of fun. I have no idea if it will translate to pledges but I am very much encouraged by the positive reception. And if by chance you were in Hay at the weekend and saw me at it, I hope this might remind you that I have a book waiting to be published. All it takes is a few backers, so please do pledge if you'd like to see it come to life.

Enjoyed the account of your brave exposure at Hay!!
Well done you :-)
I've never been a 'follower' and now I'm following you and Vincent Burke too! More anon xxxx

Thanks Heather. Appreciate the follow and the encouragement. It was fun when I got into it.