It doesn't get old, coming on here, seeing that orange circle emblazoned with 112%. Knowing 'Echo Hall' will finally be published has been a lovely way to end the year. It's been a long time coming.

If you've been paying attention to my shed posts, you will remember that I first had the idea for 'Echo Hall' in early 2004, nearly 13 years ago. Back then, the children were very small, and I had neither the time, energy or physical space to write any of it down.  It wasn't till 2007 that I was finally able to get some of it out of my head and onto the computer screen, but because I had to juggle writing with family life and working, it took another four years for me to finish a first draft. By then I'd been at it for 7 and a half years, at which point my eldest daughter (who was13) helpfully said, 'If it took you this long to write a first draft, how long will it take for the second?'. Thankfully, not quite so long, and several drafts later, I reached the end of 2013, ready to launch my precious manuscript into the world. After that, it still took another two years and several more revisions for me to get a publishing deal, and another ten months of hard graft crowdfunding to reach the point when I could finally send it off. The whole endeavour has taken me thirteen years from start to finish.

I've kept going all these years for two reasons: one, because, I believe I've written a story that's worth telling and two, because I'm a stubborn bugger. Although it's been very,very hard at times, I only felt like giving up once, way back in 2008. I was still finding my feet as a writer, and learning how to give and receive criticism, when I received some that was delivered in such an unhelpful way, it made me feel like my writing was worthless. Although the critiquer had some valid points, which in the long run proved useful, the manner in which it was given left me absolutely devastated. And for a while, I seriously questioned whether I was good enough to be a writer. In the summer of 2008, I nearly gave up.

Three things saved me from that fate. Firstly, my gorgeous husband, Chris, who met me at Gloucester Green, comforted me through my sobs, bought me chips and promised me we'd return with bubbly when I had my book deal. He made good on the promise a fortnight ago, when we returned with a glass of Prosecco to celebrate the manuscript going off to be edited. (Every writer needs someone like Chris, and I'm lucky to have him, and in addition, my twin sister Julia and my dear friend Anne, who have also been pivotal in keeping me going). 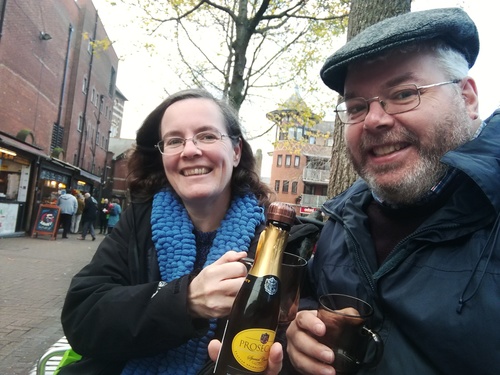 The second thing that saved me was a fantastic family holiday. It had been a hard year at work and on my writing course, so at the moment I received that feedback, I was just too exhausted to process it rationally. Two weeks in a lovely holiday cottage just outside Tenby, where the sun shone, the kids played and Chris and I relaxed, was enough to put it in all perspective. Pretty soon my creative juices were flowing again, resulting in two new short stories.

And the third thing? Visiting nearby Laugharne, where Dylan Thomas once lived with his family, and which partly inspired the town of Llareggub in 'Under Milk Wood'. I wandered through the streets imagining the Ogmore Pritchards, Captain Cat, Myfanwy Price et al, visited the famous Boathouse, peered into the wonderful writing shed that overlooked the estuary, before finding my way to the graveyard where Thomas and his wife Caitlin are buried. It's a huge cemetery with three different parts,and it took me a while to find their section . I first came across Caitlin's name, neatly written on a plain white cross. Stupidly, I wasted five minutes looking for Dylan, before realising that they were buried in the same grave, her name is on one side, his on the other.  I found it intensely moving that nearly forty years after his death, long after she had left Laugharne she would choose to return to be  buried with him. As I stood in front of their grave, I thought about the fact he was able to write brilliant poetry, prose, and drama, how he used words like magic, how his writing makes me laugh and cry. And I realised that despite the unhelpful feedback, I wanted to be a writer more than anything and to move people the way Thomas moves me. It was a turning point that helped me decide not to abandon my writing course halfway through, and made me realise I’m a writer come what may. 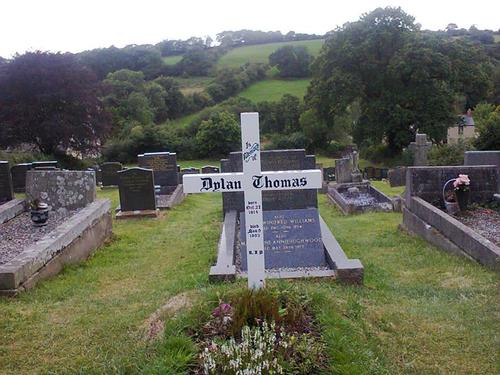 Since then, I've had many moments when I've wondered if 'Echo Hall' would be published, but I've never doubted my writing abilities again.  And after 13 New Year's Eves hoping that next year will be my year, it is simply wonderful knowing that 2017 really will be.

Thanks so much to you all for making this happen. I look forward to sharing the next chapter with you.

That's wonderful Virginia - I look forward to getting a copy in my hands!
Our daughter Fiona and family live in Oxford, so who knows, we might meet up sometime?!
Warmest good wishes,
Heather xx