As you'll know if you follow us on Twitter, Facebook or Instagram, we've been posting an image a day from the Draw The Line project. Today's is from Joe Decie, and celebrates 'neighbourhood sharing' schemes. Typically for Joe, it takes a slightly sideways view. 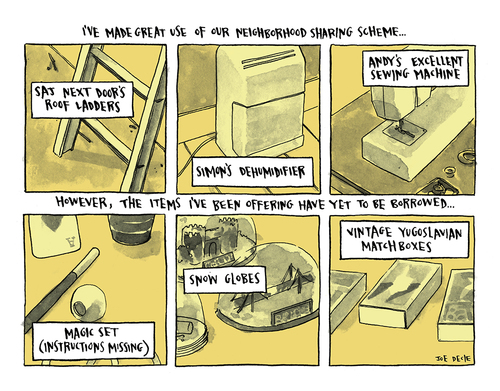 If you're not familiar with Joe's work already, then boy do you have a treat waiting for you - you can flip through stacks of his comics on his own website. There goes the next hour or two!

Joe is also one of the Draw The Line artists who's offered an extra reward for our crowdfunder - he'll make you your very own pen and ink still life drawing. It's an absolute bargain for a Joe Decie original, and of course, like the rest of the profits, the money will go to our chosen charity Help Refugees.

Talking of original artwork, Roger Langridge has also very generously offered the A3 original of his own Draw The Line artwork. Of course, only one person can claim this reward, 'cos there's only one in existence! 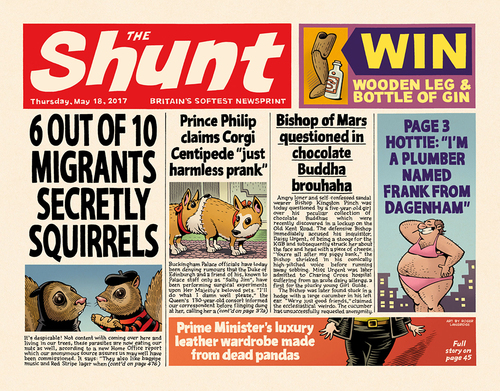 Imagine how great this would look hanging on your wall - plenty for your visitors to read! It'd also be a great addition to a cafe or pub's decor.

Roger is a prominent figure in the comics world, having contributed to Judge Dredd, Muppets and Marvel comics, and he's also known for his own creation Fred The Clown, which was nominated for all of the big awards in comics, from Eisner to Ignatz. Don't miss your chance to claim this one-off: the first to pledge gets it!

Meanwhile you can enjoy more of Roger's work on his own website.

Cheers all - I'll be sharing more comics from our contributors next time.