Draw The Line funds boosted by a rainbow dinner

It's always lovely when new Draw The Line pledges come in. When those pledges involve an evening of food, wine and good conversation, well — you certainly won't hear any complaints from me!

The newest contributions come thanks to Gwendoline, of Hastings, who generously suggested that she could host a crowdfunding event, with the cost of entry being a pledge. On Saturday night, she gathered together a very interesting tableful of local folk and served us dinner.

And it was no ordinary dinner! Seven courses, each one reflecting a colour of the rainbow (which is why I have chosen Al Davison's work, below, to accompany this update — as you can see, he backed his illustration for the action 'challenge hateful views' with a full spectrum of colour).

After I had given a short slideshow to explain Draw The Line, out came the amazing parade of food: stuffed red pepper was followed by orange butternut squash soup, which was followed by yellow risotto, green salad and so on until the blueberry dessert. When we finally all set off for home, we had a rainbow inside!

I'm sharing this partly to thank Gwendoline once again for having had such a lovely idea, and then putting it into action to such good effect. I'm also hoping that it might provide inspiration to anyone who might want to throw a similar event.

After all, it's always good to have an excuse for a party! And it doesn't have to involve cooking: any event with a pledge as the cost of entry would be effective. Don't forget that all profits from the book are destined for the charity Help Refugees, so it does good all round.

If you do fancy doing something like this, and you're reasonably local to Brighton, I am happy to pop in and give the talk. You don't even have to feed me :) And if you're not local, well, we have a lot of Draw The Line artists all over the place, so it's quite possible we could send one along. Just get in touch and we'll be happy to discuss.

Cheers and all the best, 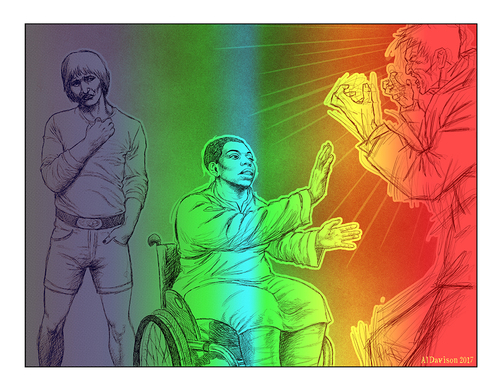