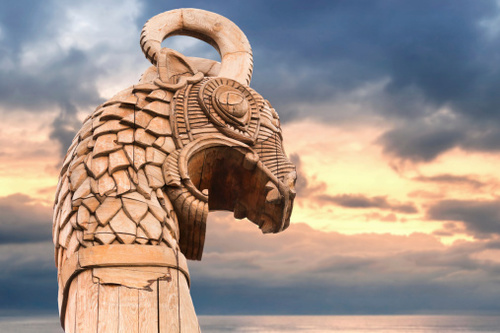 As anyone who has read Saxon’s Bane knows, I like to write stories where worlds collide. Not, I hasten to add, in the astronomical sense; I don’t write Science Fiction, but I do like the past to echo in the present. Even better, to play on it in a way that has the reader wondering if there is more in today’s world than can be explained by science.

Weaving the past into the present

In a previous post I described how the initial idea for Draca came at anchor in a friend’s boat, watching the ebbing tide reveal the bones of dead ships. What else did the silt’s ancient layers conceal? After all, Guthrum’s Viking army wreaked bloody havoc in that very harbour during their war with Alfred. There’s a contemporary, 9th Century poem by Torbjøn Hornklov which evokes the moment when the dragon ships surged out of the mist:

All eager for battle,

They carried a host of warriors,

And spears from the Westlands

The berserks were roaring

(For this was their battle),

And the irons clattering.

But how might such a moment impact the present? Weaving history into a contemporary novel is tricky. In Saxon’s Bane I set whole chapters in the Saxon era. In Draca I took a more subtle approach, revealing the past through the contents of an old man’s bookshelf; his diaries, his obsessive research into his own Danish heritage, and his copies of the ancient sagas. If the tidal scour revealed a Viking artefact, he’d probably keep it. His diaries could reveal his mental disintegration, until he dies raving that he ‘tried to give it back’.

The joys of research

Researching a book can be wonderfully diverting. It sucks time as you wade through bogs of facts. Whole days sink without trace. That old man dies in the first chapter and it’s his legacy that triggers events. Still, just populating his bookshelf mired me very happily in perhaps a month of reading ancient history. I could use almost none of it. All for a book set in the present day.

There are a few exceptions. A dictionary of Old Norse taught me obscure words that became chapter titles; (Chapter 1: Arfræningr, one stripped of his inheritance). Snorri Sturluson’s 13th Century Heimskringla taught me the lilt and vocabulary of Old Norse, even in translation. It taught me enough to ‘book-end’ chapters with short extracts from a Viking saga.

So readers of Draca will find slices of history framing a modern tale; slices that tighten the tension as the ancient and brutal past starts to resonate ever more loudly in the present. Next year, after publication, you’ll be able to tell me if it worked. For now, here’s how that back story begins.

From the saga of King Guthrum, c.875AD

That winter King Guthrum laid down a mighty dragonhead ship for his son Jarl Harald, whom he loved and honoured most of all. Of oak did he build it, cut finely that it might bend with the sea, with benches of pine for twenty oars on the one hand and twenty on the other. The fittings were splendid, as befits a great jarl, and a richly carved strake rose to a wondrous dragonhead at the prow. As was the custom, this could be taken down, like the helm of a warrior, lest it offend the landvættir, the land spirits.

Then Guthrum and Harald made sacrifice in this wise: Harald took a stallion that he loved, and calmed the beast, covering its eyes that it might not see whence the blow would come. Then they took their axes and struck; Harald between the stallion’s eyes, and Guthrum at its neck such that the sound of the blows was one, and none could tell who made the killing wound. So mightily did Guthrum wield his axe that the stallion’s head was wholly struck off, and the wise ones said that the fall of the blood was good, for the dragonhead tasted blood before ever a bowl was brought to its mouth.

Then Harald knew that the gods would sail with them, and would find them even in the furthest reaches of the sea, for the dragonhead was truly consecrated to the Æsir.