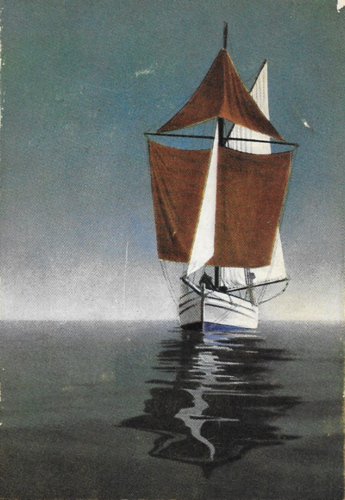 There’s a classic sailing boat at the heart of the plot of Draca. Those who know me well have asked how a landlubber like me could write the maritime passages. After all, ten years ago the only thing I could remember about sailing was a bushy-bearded instructor bellowing at me. I think he was saying “when you see the seagulls walking, it’s time to go about.”

Confession time. In a previous update I described how the idea for the book was born, anchored in a natural harbour on England’s South coast. The next time I sailed, with the same friend, the concepts for the book had formed to the point where we’d divert our course, on entering a harbour, to take a closer look at any classic sailing boats nearby. Old boats seem to have more personality, and I needed to find a type that was probably pre-war, and of a size that could just about be sailed single-handed if the skipper was fit and knew his stuff. Yet it was online research led me to Bristol Channel Pilot Cutters, the model for Draca.

Pilot cutters were built to wait for ships to arrive off a port; pilots earned good money guiding vessels into harbour. With the pilot there’d be a mate, a seaman, and perhaps a boy. Cutters were robust enough to wait offshore in all weathers, perhaps for weeks. They had neither the belly of a fisherman nor the sleek lines of a racing yacht, but they needed speed. The first cutter to hail and offer their services would get the job. The cutter would follow the ship into harbour, recover their pilot, and go back to sea until the next ship. Sailing cutters fell out of use after telegraphy meant a ship could signal ahead. By then a steam powered launch could rendezvous faster, and against the wind.

Then I discovered ‘A Yachtsman’s Log’, written by Frank Carr for a readership with salt water in their veins. It’s a fascinating insight into sailing his cutter, the Cariad, in a technologically simpler time. No radar, no echo sounders, not even simple mechanical tools like winches to hoist sails. It was a time when fog at sea meant true blindness, navigating by dead reckoning among the tides and rocks, with the unseen bells of buoys to guide you if you were lucky. There are passages that are quaint by today’s standards; picture four men, after a sailing trip, taking the cutter’s dinghy up the Thames to work in the City, all shielding their starched collars from the wilting spray with their bowler hats.

But one of those men also wrote about life-threatening crises at sea with self-deprecating charm. Frank Carr was very much a certain type of Englishman from that age of sea power and Empire.

So if anyone questions how a pilot cutter handles in a storm, I have it, chapter and verse. And if anyone says it’s impossible for a boat to even survive a particular situation, then I beg to differ. A plucky chap called Frank Carr left me his log. And he’s certainly not one to boast.

I cherish my well-thumbed copy of A Yachtsman’s Log by Frank G G Carr, published by Lovat Dickins and Thompson in 1935. The image above is of his boat the Cariad and is on the cover. The book is long out of print, but you can see the Cariad, now restored, at http://www.cariad.org