Draca will now have a 'virtual' launch 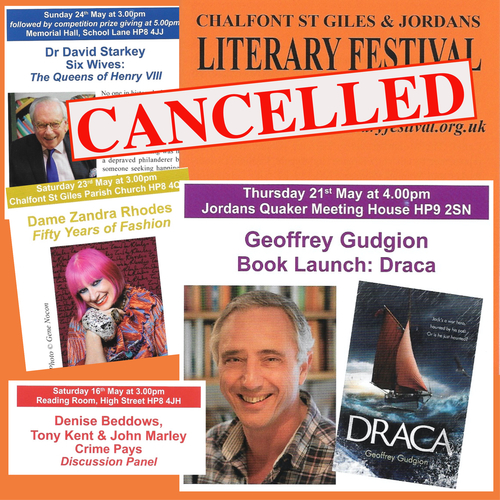 In a world where people are rightly concerned about their loved ones' health and about crashing economies, a mere book launch seems like a trivial issue. However you've helped me bring Draca this far so let me update you on unfolding plans.

There were to have been two 'launch' events; the Chalfont St Giles Literary Festival, and a celebratory gathering at Daunt Books' City bookshop on Cheapside. In the light of new government guidelines the Literary Festival has now been cancelled. I had already pulled out of the Daunt Books evening; even before the current restrictions, calling a City launch event during the probable peak of the pandemic felt a little like throwing a beach party after a tsunami alert.

Unbound have confirmed that the Draca's release will go ahead as planned on 14th May. You should have your copies a little before that.

Timing, as they say, is everything, but the Pangolins' Revenge was something I couldn't plan for. Draca's launch will now be a 'virtual' affair, dependent on press releases, a blog tour, and those all-important early reviews. You each could play a part in that, and closer to the date I'll tell you how.

Let me finish with some good news. I sent early copies of Draca to some 'names' in the literary, military, and sailing worlds, and I'm glad to share some stunning feedback with you that will soon grace the book's cover:

From General Sir Nick Parker, Commander British Forces Afghanistan 2010: ‘A terrific and compelling story which highlights mental and physical challenges that many who have served will recognise.’

From Suzie Wilde, Author of the Book of Bera trilogy: ‘Tension release, tension release, fear, laughter, fear, lust, so you don’t notice the tightening of the noose … the story sucks you in and won’t let go.’

From Ewen Southby-Tailyour OBE, former Yachtsman of the Year: ‘A cracking, believable yarn made even more authentic by the wonderfully descriptive sailing scenes – and by falling in love with the true heroine, the Bristol Channel pilot cutter Draca.’

I'm hugely grateful to Ewen, Suzie, and Sir Nick for taking the time to read the book and comment so favourably, and particularly to one friend who made crucial introductions. Support like this will give Draca a very fair wind.

When the world is a safer, more predictable place I hope to organise an event for supporters. It won't have the immediacy of a 'launch' but it would be wonderful to raise a celebratory glass with those who have made Draca reality.

In the mean time, say well.