What really is the point of trying to teach anything to anybody?

We thought you would like to be made aware of an argument related to the book that is currently raging* in the UK press. A page from the archive that we sent out when announcing the launch of the book included Douglas complaining about being fed up with writing and referring to Arthur Dent as a burk. His peevishness doesn’t last long as you can read on the image below, but it is the spelling of the word burk that has caused the controversy. 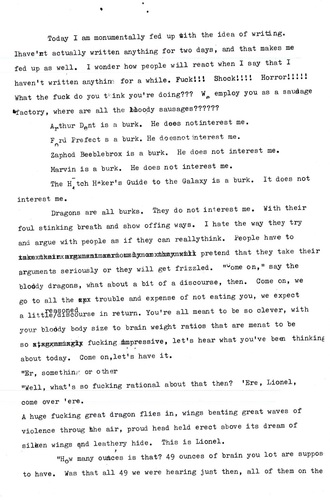 From the letters page of The Guardian…

While he may have been a great writer, Douglas Adams had obviously not done his homework on the derogatory term “berk”, which he spells “burk” (Douglas Adams’ note to self reveals author found writing torture, 22 March). The insult is derived from the cockney rhyming slang term “Berkshire hunt”, which readers may care to look up after the 9pm watershed.
Colin Burke
Cartmel, Cumbria

Colin Burke (Letters, 22 March) perpetuates the myth that the etymology of “berk” is derived from the Berkshire Hunt. My dad, a docker from Bermondsey, told me it was the Berkeley Hunt, the oldest pack in the country, that provided the root of the rhyming slang so casually bandied about these days.
Michael Horsham
Ham, London

If none of this makes sense Wikipedia has a most excellent entry explaining cockney rhyming slang here.

You can hear Douglas’s sister explaining why Douglas referred to Arthur as a burk in the lovely radio interview on CBC from yesterday here.

Finally, if anyone has stories about how they first discovered Douglas’s writing we would love to share them. Please add a comment below.

Thanks once again for all your support.

In 1978 a friend of mine told me that he had been listening to The Hitchhiker's Guide to the Galaxy on Radio 4. He had recorded every episode on cassette tape which he then lent to me. I was hooked.

where is my book?

It was the Easter holidays from school. I was sixteen and had been working in McDonalds to raise money to travel in the summer. I came in late to find my mother in bed listening to the radio. "You've got to come and listen to this," she said, "it's brilliant". it was. It was the first airing of the first series of The Hitchhikers Guide to the Galaxy. It has travelled with me ever since - and with my sons in their turn (last Christmas I gave them hoodies with 42 on the front). I grew up to write for a living (well, to write anyway) - I've even written a guidebook - but never anything to touch the universal brilliance of Douglas Adams' Hitchhikers Guide.

A gentleman call Chris Whittington suggested I join him to listen to the original broadcast of Hitchhiker’s, back in fhryc*6n’all, and I have all episodes on best reel-to-reel at superb 7.5 inches per second tape speed, don’t you know ...
Now - in which work and where does Marvin regurgitate a sentence with more negatives in it than I had ever read before. I can’t remember the book - but it’s NOT the original Guide to the Galaxy, so a later one - nor the moment that almost stimulated him to say it, but my mind has remembered that I enjoyed the sentence.
And lastly, is commas and other punktuation fings INSIDE or AAATSIDE the squiggly marks? Thus, 1) “Split-my-windpipe,” she said, ... or ... 2) “That really freaks me in”, he said.
I also actually bought the first paperback, with its mis-quote on the back sleeve. I heard Douglas Adams speak in Cambridge, one time, and asked him to sign it - which he did.
I think he spoke about the difficulties of recording Manitees underwater, when Sound has not brought along a waterproof microphone. They disappeared off to find a chemist, and bought some condoms - which work very well as a waterproof microphone sleeve - don’t they, obviously. Not sure I would have thought of that. I think the book he was promoting was Last Chance to See.
And another thing ...
... British Telecom issued a company phonecard, of some name or other, where you could use a magic number to dial from anywhere in the world. I had to fill a Bt form out with the usual toot; however, it asked the specific question, “what name would you like to appear on the card?”
I thought about this carefully, and wrote “Zaphod Beeblebrox”, and my card duly arrived with said name embossed on it - I still have it.
I was in Brighton, and needed to make a call. I was outside, under cover, adjacent to an exhibition centre. I remember the facility had a roof like that of a traditional park bandstand, and the phone booths were arranged in an arc around its circumference. Quite a few booths - not enclosed boxes - but booths.
I had my super-duper dialamatic sponge-sharpening BT phonecard, so set about making the call.
I dialled the access number, as usual, but no automated joy - for some reason. It this case, one could call the special operator ...
“Hello - what’s the long number on the card, Sir?”
“477983560025”
“Sorry, Sir, the line is quite poor. Please repeat the long number”
“ 4 7 7 9 8 3 5 6 0 0 2 5”
“Thank you. What is the name on the card?l
“Zaphod Beeblebrox”
“I’m sorry Sir, what did you say?”
“Z a p h o d B e e b l e b r o x”
“Did you say HayBox, Sir?”
“No ...”, more loudly now, “Z a p h o d B e e b l e b r o x” ...
“I’m sorry, Sir, I still didn’t hear that ...”
Very loud, “ZAPHOD BEEBLEBROX !”
... and all the other callers in all the other occupied booths leaned out to see if they could actually see him ...

Sorry to upset you, if you were one of them.

I was in 7th grade when I saw a classmate reading Hitchhiker. He leant me his copy, and I later leant him my copy of Life, the Universe and Everything. I used to read the text out loud to anyone who would listen.

I would have been 10 when I saw the trailer for the TV series and thought "That looks fantastic." I had heard of Python from a friend but not seen anything. I loved Star Wars but knew this was completely different and clearly needed to be preserved. Now the youth of today, with their TikToks and what have you, may struggle to understand this, but the only way the H2G2 series could be saved and cherished in our house in 1981 was for me to sit next to the TV with my Hitachi tape recorder and press play and record as soon as it began. And then listen to it continuously for months afterwards, trying to remember the visuals that accompanied it. So although I came to it as TV, it was primarily as an audio entertainment I knew it initially.

Kinda a bit off beam here but the other day this film was on TV "A Day to Remember". It basically is about the tales of a group of English day trippers to France. https://en.wikipedia.org/wiki/A_Day_to_Remember_(1953_film)

What's the relevance to the 42 book I hear (hope) you ask? Well the film starred a certain Peter Jones playing a character called Percival. In the film Percival was continually reading from a travel guide which he referred to as the Guide...roll onto 1978 and H2G2 on Radio 4 with the self same Peter Jones as the Book/Guide.

Buying a first edition paperback of Restaurant At The End Of The Universe in my second year at university and never looking back. A happy day for me!

As a child I would read everything and anything, including the Radio Times from cover to cover. In the radio section I saw a listing for The Hitch Hiker’s Guide To The Galaxy and I was immediately intrigued. I thought it was going to be a radio version of The Sky At Night. Before I ever got to listen to the radio show I saw a copy of the paperback in WH Smith. I bought it without hesitation and that was the start of of lifetime consuming and channeling Douglas Adams.

My father bought me a copy of the Hitchhiker's Guide to the Galaxy when I was a teenager. He felt the words "Don't Panic" were the best words of advice he could give me. He was correct.

I remember being at a Supermarket checkout with my parents as a teenager when I saw a carousel (the type seemingly made of wire coathangers, which, while designed to spin, usually opted to emit a half-hearted creak before toppling over, often seen holding postcards) of paperbacks. Prominent on the side facing me was this slim garish paperback with, well you know what was written on it, I don't need to say any more. Even more appealing was the £0.99 price-tag. What's not to like? I slipped a copy into the trolley…

The guy I dated in high school loved the books, and once I read them I was hooked. My oldest friend and I bonded over the books, and we get together every year on May 11th ( virtually last year) for 3 pints.

I can't remember how I first heard about it, but I found out about the H2G2 readio series a little while before it was first broadcast in 1978 (I was 11 at the time). I taped every episode and listened to them over and over again. Of course, I bought the books as they got released and watched the TV series. At around 1982/1983, I wrote a program to allow me to connect to my computer to "bulletin board" servers and was taking a look at the list of users on one of them when I came across Douglas. I wrote to him and we corresponded on and off for a while. I think that at the time, he was using it to send files to Infocom for the adventure game and he was talking to studios in the US about a film adaptation, which he seemed to find frustrating.

It was actually my school English teacher in the early 80's. She was one of the best teachers I ever had, an initially very frightening young woman with spectacularly high heels and even then she wasn't the height of many of the pupils. But because she had carefully cultivated and maintained this fearsome reputation, her classes ran smoothly and she bled enthusiasm. She also discussed material outside the curriculum, which was great, and she was passionate about H2G2. So I first got the LP from the local library, then the books, and thus an obsession was created. I've even had a whale and a pot of petunias fall in some of my lecture slides :D