Dear all,
Just to say a big thank you for everyone who has pledged for the book and helped it reach its target so quickly. We will be posting regular updates to let you all know how the book is progressing and also share with you what we discover along the way.

One of the most curious artefacts in the archive is this little model of Babel Fish. It was spotted by Kevin Jon Davies. I will leave it to him to explain its significance... 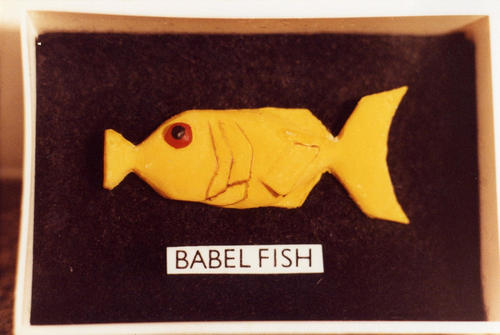 Cast of the Babel Fish, given to Douglas by Susan Moore.

"Susan Moore was just beginning her career as a sculptor, mask and prop maker in 1980. She made the rubber Babel Fish in episode 2 of the TV series, based upon the design in the animation. We see it only briefly as Zaphod takes it from the bubbling Fish Dispenser on the bridge of the Heart of Gold and feigns sticking it in his ear. For episode 5 she provided several masks and monsters at Milliways, the Restaurant at the End of the universe. When our heroes first arrive, Sue’s two insect creatures are the first aliens they meet. (I puppeteered the brown one.)

At one studio session (or was it the wrap party?) Susan presented Douglas with a little cast of the Babel Fish. It’s either in latex or resin, mounted in a little box, like a piece of jewellery, with a Letraset label. She also produced a few resin pin badges from the mould, some of which she sold at SF conventions. (I was wearing one on a holiday to Florida in 1988. The guy at the rental desk recognised it and upgraded my car!). Anyway, I was delighted to see Douglas had kept the Fish 'badge’ all those years. 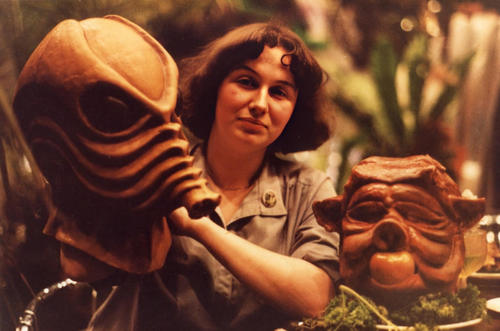 Sue on the set of Milliways, for The Hitchhiker's Guide to the Galaxy TV Series, December 1980.

Sue went on to sculpt rubber monsters for Doctor Who in the late 80s. She also worked at Spitting Image, air-brushing the puppets’ faces - and in the early 2000s she worked on special effects for a couple of the Harry Potter films."

In other news. . .  since we put the initial page together Gary Brooker, the legendary founder of the band Procol Harum has also agreed to write one of the Letters to Douglas we are going to include in the book. Douglas was a big fan of his work. This is from the Procol Harum website (not the archive) but is so lovely it is worth sharing. This is Douglas introducing the band on stage at the Barbican in London...

Anybody who knows me will know what a big thrill it is for me to be here to introduce this band tonight.

I've been a very, very great fan of Gary Brooker and Procol Harum ever since nearly thirty years ago when they suddenly surprised the world by leaping absolutely out of nowhere with one of the biggest hit records ever done by anybody at all ever under any circumstances. They then surprised the world even more by suddenly turning out to be from Southend and not from Detroit as everybody thought.

They then surprised the world even more by their complete failure to bring out an album within four months of the single, on the grounds that they hadn't written it yet. And then in a move of unparalleled marketing shrewdness and ingenuity they also actually left A Whiter Shade Of Pale off the album. They never did anything straightforwardly at all as anyone who's ever tried to follow the chords of A Rum Tale will know.

Now they had one very very particular effect on my life. It was a song they did, which I expect some of you here will know, called Grand Hotel. Whenever I'm writing I tend to have music on in the background, and on this particular occasion I had Grand Hotel on the record player. This song always used to interest me because while Keith Reid's lyrics were all about this sort of beautiful hotel - the silver, the chandeliers, all those kind of things, but then suddenly in the middle of the song there was this huge orchestral climax that came out of nowhere and didn't seem to be about anything. I kept wondering what was this huge thing happening in the background? And I eventually thought ... it sounds as if there ought to be some sort of floorshow going on. Something huge and extraordinary, like, well, like the end of the universe. And so that was where the idea for The Restaurant at the End of the Universe came from - from Grand Hotel."

I have a little Babel Fish badge. Looks similar. Can't remember where it came from.

Congratulations on hitting funding so quickly, and out of nowhere too!
At last a true successor to the salmon of doubt...

I suspect The Guardian article the other day resulted in the extra funding. That's what alerted me to the plan. Delighted to be a part of all this. He was a true legend of the towel.