The Cambridge Archives – a fresh visit

- a message from Kevin Jon Davies -

Last year was a trying time for us all. The library at St. John’s College, Cambridge, where Douglas Adams’ personal archives are held, was closed to outsiders for most of the year due to Covid. This was a sensible precaution, allowing only their live-in students access, but a disappointment for me of course, eager to continue my research for the book. When the restrictions relaxed in the autumn it unhappily coincided with first me, then my wife, being seriously ill. We have both recovered, but unfortunately, this has impacted on the work for the book.

The effort continues nonetheless, now at an increased pace. Unfortunately, the publication date has been pushed back to the second half of 2023; this will give the time needed for Unbound to make the high-spec book we envisaged when we launched this project. I will keep you updated on this as much as possible.

The good news is last week I made my first foray this year back to Cambridge amid some terrible weather which hit the UK by the name of ‘Storm Eunice’. Driving an hour up the motorway from my home in North London I saw several trucks fish-tailing their way on wet roads and high winds, as if driven by the Rain God himself, Rob McKenna, of ‘So Long And Thanks For All The Fish’. 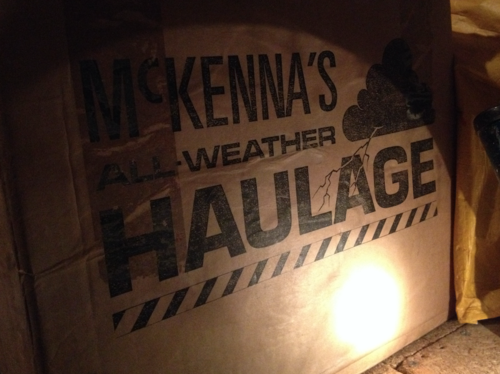 This was a prop box with a label made by Tony Clark for the 1992 BBC documentary shoot for ‘The Making of The Hitchhiker’s Guide To The Galaxy’. It was eventually only seen briefly in a graphics sequence, but now lives in my attic.

Adam Crothers, a library assistant at the Rare Books Reading Room, was as helpful as ever, explaining the current Covid restrictions (‘2 hours per session, keep a mask on!’) and delivering up the boxes of papers I’d pre-ordered. The room in the 500-year-old building has a high ceiling and is light and airy. Very airy in fact, as the window had to be left open – until Eunice got rather too blowy! 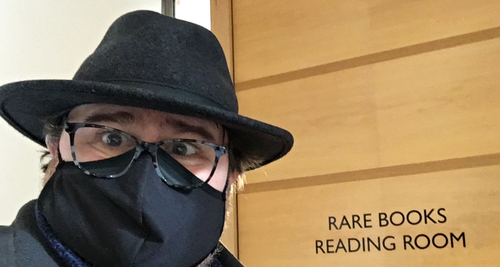 Who was that masked man?

I do find it emotionally moving to read material in Douglas’ own handwriting, knowing him quite well, as I once did. To pore over the pages, seeking out odd paragraphs, excerpts, correspondence and jottings for inclusion in this fascinating project, I’m left with a sad, slightly guilty feeling, knowing this has only been made possible because of his early demise. Would he have let me, or anyone see his workings in the margins, his raw unfinished text, whilst he was still with us? Probably not. Would he have understood that so many of his fans around the world miss him and just want to read more from his extraordinary mind? 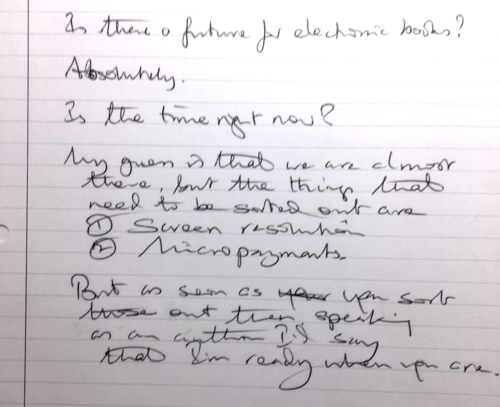 ‘Is there a future for electronic books? Absolutely. Is the time right now? My guess is that we are almost there, but the things that need to be sorted out are - 1. Screen resolution. 2. Micropayments. But as soon as you sort those out then speaking as an author I’d say that I’m ready when you are.’

Sadly, he didn’t get to see how prevalent e-books would become, as he knew they would.

His thoughts seem to pour out onto the page in front of me, be it in his own inky hand, banged out an old typewriter, or dot-matrix printed on continuous form paper, as he experimented with his earliest word processors. The later material is more professionally printed by better computers, probably on one of the many Apple Macs of which Douglas became a well-known proponent. He was invited to speak at high-level conferences on various tech topics. Here’s a draft section of a speech he gave almost exactly 21 years ago, at the 3GSM World Congress on the future of mobile technology in Cannes, France. On the day though, (following straight after a speech by Richard Branson), it seems Douglas pulled his punches and dropped the gag at the end…

It's often mentioned on fan pages and forums that some people have noticed the answer 42 means something in ASCII (character encoding) and so they believe Douglas must always have been a computer-literate nerd. This coffee-stained relic dispels that idea… 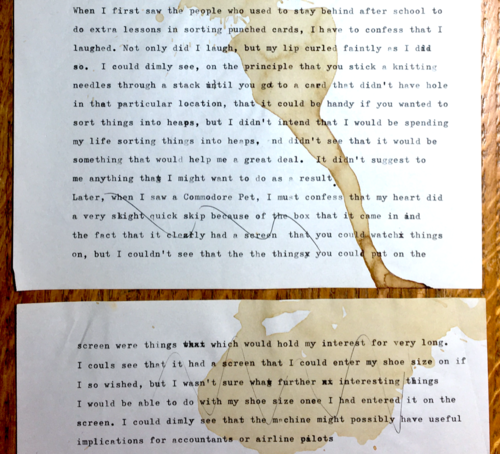 In fact, Douglas wrote his first four ‘Hitchhiker’s Guide’ novels on typewriters, well before he began to experiment with word processing. What’s interesting though is how, as time went by, he whole-heartedly embraced the computer and was forced to admit that fiddling with them became a terrible time-wasting displacement activity, especially when faced with those infamous whooshing deadlines… 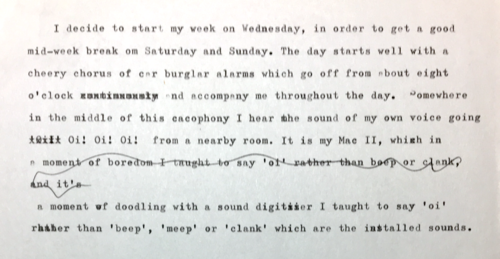 However, it does seem (in this draft for a ‘MacUser’ magazine article) that he sometimes needed a break from all the tech… 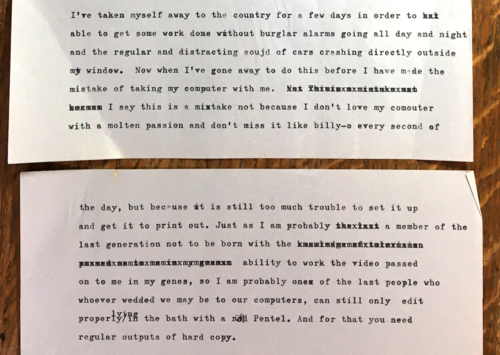 There’s a lot more snippets like this, plus entire pages of material which are sure to be included in the contents of this book. We will bring you some more here in the coming weeks, so do check back for further updates.

I am glad you are keeping with Douglas Adams' famous adherence to deadlines which was, of course, not at all. Something to look forward to in '23!

You beat me to it!
Thanks for this wedge of info but if you could indicate an idea of when the book will be published would be nice too.

Deadlines aside I think you're doing a perfect job. No complaints, just like the customer service departments at parachute manufacturers.

I fully understand the delays, and it will be a wonderful book to hold and savour, but no rush whatsoever for me. And these little teasers and snippets only serve to further heighten the anticipation. Good luck with it.

As others have said, the sound of deadlines whooshing by is entirely apt! This is a splendid post, thank you. The book will be done when it is done.

Actually that's quite helpful, as I was looking for time to rebuild my kernel before settling down to read it. Not sure I'll make to 2042 though, so please keep it moving.

Given the unacceptable lack of updates, and the delays in the publication of this book, I’d liked a full refund!

The pandemic has served you as a great excuse, but enough is enough!