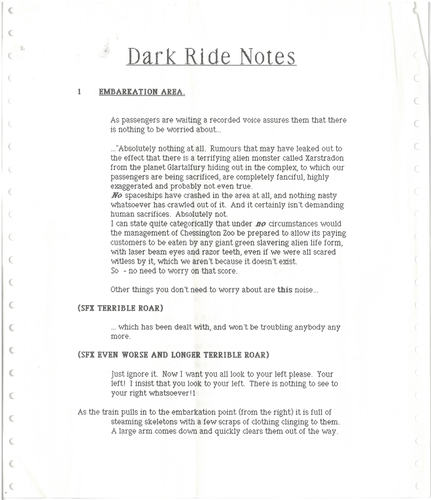 This is a typical example of Douglas' dot matrix-printed work from the mid-80s, but for an obscure project. He'd met with Ian Hanson, former sculptor, then Head of Studios at the Tussaud's Group. Famous for their waxworks, they were developing a new space-themed 'dark ride' at their Chessington World of Adventures theme park, just outside London in the Surry countryside.
“I had this one meeting with him,” said Ian Hanson, “We set up to have another and then he phoned me up and said 'sorry I’m withdrawing out of it. I can’t carry on with it, for the simple reason I’ve just been given a job and it’s paying a million pounds!'” (That would have been part of his massive advance for the first of two Dirk Gently books.) “He opted out at that moment. A great pity because he was so tuned in, that guy. He said, 'anything that we talked about, you can use it, anything from me.'” A recent discovery of original soundtracks by the British Theme Park Archive reveals that some of Douglas' ideas on this page of script certainly made it to fruition in the ride known as The Fifth Dimension. Not only that, but Hitchhiker's Guide veteran voice artist David Tate ('Eddie, your shipboard computer') played the newreader-style announcer on video as you entered the ride. It's an odds-on bet he did the scary monster voices too: “You'll never get out, you know!” Sadly, the ride was simplified and re-vamped after just six months and Douglas's witty script was given the chop.

Hi there, I run British Theme Park Archive, it's really great to see you unearthed this piece of script. I interviewed much of the design team including Ian for a documentary series on British dark rides. We tracked down the soundtrack tapes where these very lines were used. So this part the script was Douglas' own writing? That's fantastic! I only had Ian's copy of the script. I had been hoping to find out who the actor playing the Announcer was too. If there was anything else youd be interested in about the ride, Id be more than happy to help.