By Brendan Woodhouse and Doro Ģoumãňęh

After the wood in the middle of the boat cracks, we don’t have any hope. The compass man, he has the telephone and I see him call. He calls the Libyan people. The man he speaks to speaks in Arab and we tell him we are not in international water. It is Tripoli people we call. Before the marines come some people they are fighting. They are pushing each other. Some people push forwards and some people push back and before we know, the boat has more problem and plenty people are lost in the water.

The people all come to the front, the captain say we all come to the front, and only the fuel and the machine are in the other side, where the water are. Plenty people fall in the water. Plenty people. Some people say that they know how to swim and we are not far because we are still in Libyan water. So they go to swim, but all those people they die. Because that time nobody can swim in that water. The water is bad and the weather is not good. You cannot swim up to 50km when the weather is that bad.

The people left in the boat is less than 70 people and the man pushed 100-and-something people from Tripoli. Maybe 50 people they died. They just lost. Women and young men. Nigerian women there are plenty. It is them I remember too much. They were praying to Jesus. 'Oh Jesus Christ, oh Jesus Christ, oh Jesus Christ. Help us Jesus. That we not die here. Help us and our family. Oh Jesus Christ.' I remember them praying. And Muslims too. They are praying. Help us, help us! Everybody was praying and you cannot hear no one, and then in a small time, you will see somebody fall inside the water. And the boat, where the boat have problems, where the water enter into the boat, those people that are sitting there, I think plenty people are lost.

After, we start to call. When we call, the people is not Europe. It is Oussama who come. He is Libyan peoples’ coast guard. It is they who rescue us, but by that time some people lost. We didn’t see them. And the way also Oussama is helping us, he is giving us rubber rings. You will catch the rubber to enter in the big boat, you understand? They surrender our boat with guns. So there also some people that were lost with this. But nobody will mind them.

Before they come, we lost plenty of people. At 4am our boat have problem. Oussama come at around 7am. We all happy to see him, because he come to rescue us. They came first with speedboat, like you guys, but with guns. After they realise that they cannot carry our boat, they call the big boat. Before the big boat arrived it took almost one hour. They didn’t take any of us on to their speedboat, they only give us some small rubber rings. They put the rubber inside the water. It’s like the rubber rings that Sea-Watch have. It’s the small rubbers they throw to the people.

Me I give the rubber ring to other people, because me I know how to float in the water. Me I didn’t lost, but the first people who rushed to catch the rubber rings in the water, some of them lost. Because the time they throw us the rubber, they tell us to take it easy. To take one and one to come, but people, they are jumping. It is panic. Everybody wanting to come in the boat. After me I say to Ibrahim, don’t worry, we will take our time. And people they will do fisher fisher. After we will go.

In the end they throw us rubber. Small rubber rings from inside the big boat. So we will catch and put in our legs and they will throw ropes and we will climb up the ropes on to the big boat and we will go and sit down. But some people they are wounded, so they carry them. A Red Cross man bring us small things inside the boat and put things on our wounds. They said we are not going back to the prison, we will go back to our country. But first we will go to Zuwara prison.

A copy of the ebook and your name in the back of the book. 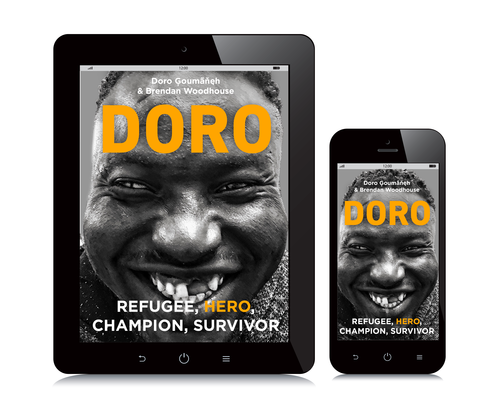 A first-edition, hardback copy, the ebook edition and your name in the book.