A quick tale of tigers, burning and... um... cannibalism.

"So now, bruised, bloodied and drunk, the victim, both of an opportunist ‘roller’ and my own weakness, I found myself in the graveyard of St Mary Matfelon staring down at the graves of Grandfather and his wife." - Memento Mori

The church, which appears in my first novel Memento Mori, is notable for two meetings between the main character Sibelius Darke and his grandparents.  Both meetings are unusual in their own way, the first as it is when Sibelius has a conversation with the ghost of his paternal Grandfather, and the second is with his maternal grandfather, whom he has never met before.  I chose St Mary Matheson, a 14th century church which stood on the Whitechapel Road, for a few very special reasons.

A large building, it dominated the surrounding area for many years, having a spire which reached two hundred feet in height allowing it to act as a landmark above the surrounding houses and buildings.  It could seat up to thirteen hundred people and was well attended by all in the surrounding parish, welcoming all Christian denominations, as well having close connections with members of the Jewish population in the area (something which incidentally is reflected in the name Matfelon taken from 'Matfel' the Hebrew word for 'woman who has lately given birth.')

There were a few notable souls buried in the grounds of the church; the hangman Richard Brandon who died in 1649, and who is accredited as being the executioner of Charles I, and also, more importantly to this little piece, a man named Richard Parker who, in 1797, led the infamous Nore mutiny at the mouth of the River Thames which demanded better conditions for sailors.

Parker, in fact, was only put in charge of the mutiny because he happened to be the most educated man on his ship, the HMS Sandwich, and had no pretensions of being a leader. However, the rebellion on his ship quickly spiralled out of control when other ships joined the mutiny, creating a “Floating Republic” which blockaded the Thames preventing all entry to Londons docks. 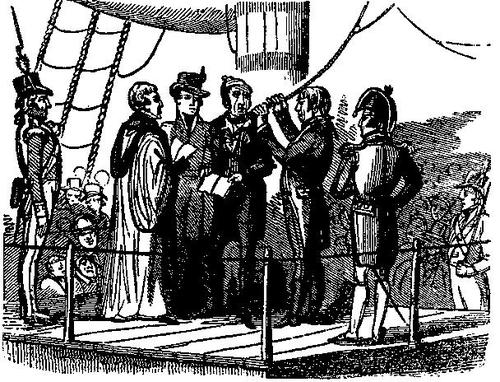 Parker became known as the ‘President’ of this republic and found himself drawing up a set of ransom demands for the ending of the blockade.  When it became clear that their demands would not be met, ships began to abandon the cause and soon the ‘President’ was arrested and executed by hanging aboard the Sandwich.

Apparently, George III wanted him to be publicly gibbeted, but did not get his wish and he was buried in unconsecrated ground.  He was not allowed to rest however, and his wife Anne had him found, dug up and smuggled in to London where crowds gathered to see him.  Eventually his body received its last rites and he was taken to St Mary Matfelon.

Now I humbly ask that you allow me to tangentalise* a little, just for a short while, as this is the story of where my thirst for knowledge, through historical research, has led me this week.

The name Richard Parker is one which is forever linked to seafaring and shipwrecks, history is littered with them, the most gruesome of which was the tale of young Richard Parker, a cabin boy aboard an English Yacht, The Mignonette.

In 1884 four crew members of the yacht, were shipwrecked in a storm some 1,600 miles from the Cape of Good Hope. After a few weeks, adrift in a lifeboat, Richard Parker, fell unconscious, due to a combination of hunger and drinking seawater. The others (one abstaining) decided then to kill him and eat him. They were picked up four days later, and the two cannibal crew members were immediately arrested and put on trial for murder where they were convicted, though their death sentence was commuted to six months' imprisonment. 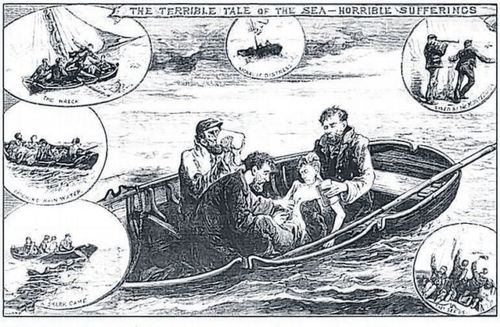 The case has gained notoriety since for two reasons.  Firstly, because it decided that necessity was not a defence for a charge of murder (so there’s no point in claiming, “I had to do it, m’lud.  It was necessary to repeatedly stab him and bury the body in a shallow grave!”)

The second reason is more recently famous and was due to the writer Yann Martel hearing of this story of shipwreck and cannibalism.  It gave him the perfect name for his tiger in Life of Pi.

That's not where it ends though...

Quite the strangest thing about the case of the poor, and apparently very edible, cabin boy Richard Parker was that his death was predicted 46 years earlier by Edgar Allan Poe in ‘The Narrative of Arthur Gordon Pym of Nantucket’.  This, the only fully completed novel by my absolute favourite writer, tells the tale of Arthur Pym and his adventures at sea as he stows away on a whaling ship, the Grampus.  If you have not read it I would thoroughly recommend, in terms of influence on subsequent novels such as Moby Dick and Treasure Island it is quite astounding really.

In the story, Richard Parker is one of the survivors few survivors when the Grampus is hit by a storm.  Adrift at sea and starving it is Richard Parker who suggests that one of their number give up their life so that the others may live.  Straws are drawn and Parker is the unfortunate saviour of his crew members.

“He made no resistance whatever, and was stabbed in the back by Peters, when he fell instantly dead. I must not dwell upon the fearful repast which immediately ensued. Such things may be imagined, but words have no power to impress the mind with the exquisite horror of their reality. Let it suffice to say that, having in some measure appeased the raging thirst which consumed us by the blood of the victim, and having by common consent taken off the hands, feet, and head, throwing them together with the entrails, into the sea, we devoured the rest of the body, piecemeal, during the four ever memorable days…”

And another connective strand in this web of shipwreck and cannibalism?  Arthur Pym has a dog, which he smuggles aboard ship, and which is shipwrecked with him, disappearing from the story when they are adrift at sea (and probably eaten).  The dog's name is Tiger. Did Yann Martel plan it this way? I think he probably did.

Anyway, tangentalisation* over, thank you for that brief interlude, let's get back to the church.

It was rebuilt and adapted many times throughout its life, with fire claiming it on more than one occasion.  In 1877 (the year of Memento Mori) it was reopened following a fire and it's capacity increased due to the ever growing population of the teeming east end. 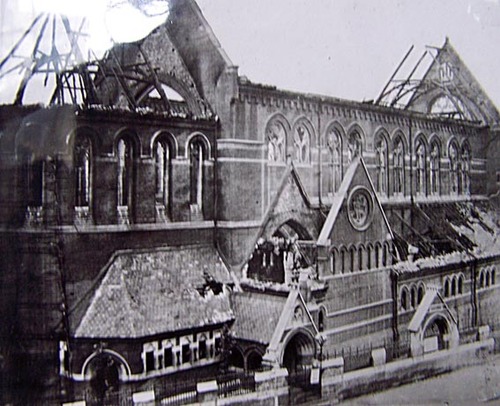 Tragedy haunted the church however and, three years after its refurbishment, in August 1880 it was destroyed by another fire, started by a workman leaving a lighted lamp inside the organ which was being repaired.  Only the tower, vestry and church rooms were left intact, and it took two years to once more rebuild.

Fire struck for a final time during the blitz of 1940, when a German fire-bombing raid saw the church’s complete destruction.

It was finally demolished in 1952, and its site is now a public park named after Altab Ali, a 25-year-old Bangladeshi man who was murdered by three teenage boys whilst walking home in 1978.  The outline of the church upon the floor of the park is all that remains.

However St Mary Matfelon's most notable contribution to the area was its original outer decoration in the 1300s; it was whitewashed with a paint made from lime and chalk, making it a bright white beacon in a dark and often dangerous setting. 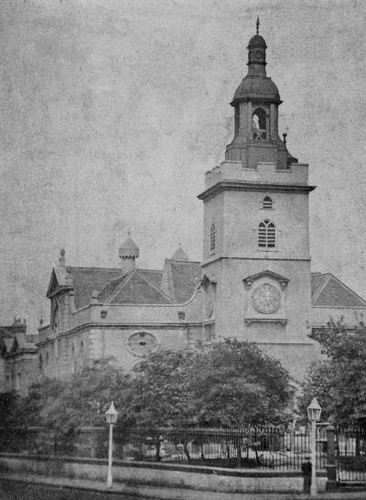 To the locals, it was known as the 'White Chapel' therefore giving a name to the district of London which, in 1888, would take on a considerably more unwelcome notoriety.

If you would like to read Memento Mori, it is available from Amazon both in kindle version or, if you really can’t be doing with the virtual, a paperback. Click HERE to go have a look.

It’s sort of sequel Domini Mortum is currently being crowdfunded with the publisher Unbound and can be found here www.unbound.co.uk/books/domini-mortum Please do head over there as well and consider pledging your support.

*I realise of course that tangentalise and tangentalisation are not real words, but I wrote them,  and I make the rules here.  Feel free to use them yourself as much as you possibly can in future conversations.  Ta x