The next video that I found was created by a group calling themselves ‘Visual Paranormal Investigations’, and the discovery of this video began a short, but intense, obsession within me.

Visual Paranormal Investigations (VPI) travel wherever the spirits take them, armed with a video camera, some snazzy hoodies with their logo on and a host of other ‘equipment’ (don’t expect Ghostbuster style heavy artillery here though, the only time they might be in danger of ‘crossing the streams’ were if they were caught short of a public convenience), their self-appointed task; to find evidence of the supernatural and make contact with those from ‘the other side’.

Now, after watching the video of their visit to Pluckley I must admit that I then ‘lost’ many hours watching their other investigative work.  Was this because I suddenly believed?  Had their overwhelming evidence changed all of my perceptions regarding ghost hunters and the existence of ghosts?  Well no, actually I watched their other videos purely for my own bizarre sense of comedy.

For the visit to Pluckley, the video immediately sets off a siren warning all those that watch it that language that may be deemed offensive is contained within.  I rubbed my hands together at this point expecting a foul mouthed torrent of abuse from the spectral plane, I was only a little disappointed, but we will come to this later.  The bad language we are told by VPI was something that they considered evidence, although I don’t know that a ghost ‘effing and jeffing’ really makes them any more real. 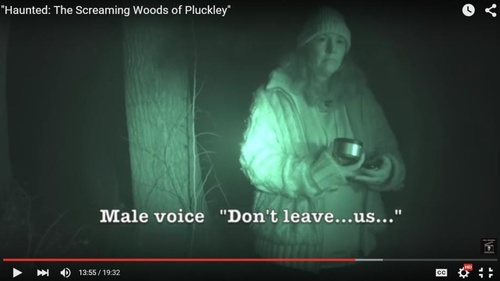 As with the last video I watched, by the never humble Lord Quim, Visual Paranormal Investigations decided that if you want to make contact with the other side then The Screaming Woods was the best place to start.  (They do point out however that their enquiries to the Church and the Black Horse pub came to nothing which left them with little other than the woods).

Our hosts for this trip into the undergrowth at night are Steve and Nell.  Steve is the founder and ‘lead investigator’ of VPI and is a man of the American persuasion.  Now I am not that great at spotting accents, but I would happily say that he is from the East Coast; New York, possibly Boston(I keep expecting him to ask for a cup of cawfee at any time throughout the investigation despite being in the dark in the middle of the woods). Nell is British and may be Steve’s partner, I don’t know, I’ve watched a lot of their videos and haven’t come to an assumption on that one yet.  But there is the thing, you see,  if you told me to watch a video found on the internet of a couple going into the woods at night in search of ‘others’, then one word, and one word alone would stick in my head.  I shall not write it but it involves friends of the four legged variety. 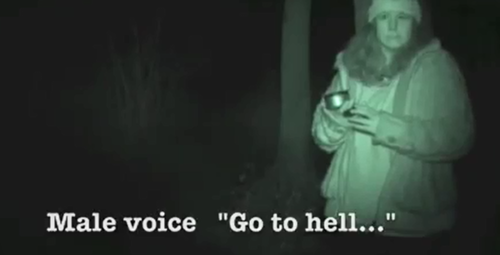 In order to find the ‘others in the woods’  Steve and Nell use ascribe to using two pieces of  cutting edge technology; ‘The Spirit Box’ and ‘The EVP’ (Electronic Voice Phenomenon).  Both of these devices seem to do exactly the same thing and take my mind back to when I had my very own ‘Spirit Box’ er… radio, many years ago and I used to try to tune in to the police frequency or continental radio (don’t ask me why I did this, it was the eighties, we never had the internet, 90% of TV was crap and had to make out own entertainment.)

The results of Steve and Nell’s cutting edge technology bring about much the same results as my own all those years past; there is some white noise and the occasional word spoken, which when taken into the ghost hunting context can be seen as a little spooky or threatening, especially when ‘translated’ by our erstwhile ghost hunters.  I will leave it to you to make up your own minds regarding what is said or not, although I suspect that the voices on the Spirit Box owe more to regional radio than to the ghosts of the lost.  That said, if I were a ghost in the Screaming Woods and were constantly tormented by people in hoodies stumbling around in the dark and asking to speak to me, then I would tell them to “piss off”.  (and toward the end of the video the 'ghosts' resort to more extreme language in an attempt to shock and scare way our intrepid couple.  You will see from this first video though, why I suddenly became a little obsessed with their other ‘investigations’.

Anyway, enjoy (if you can) and remember that the truth is indeed out there, but it probably is not what Steve and Nell were looking for.

Next time - The big guns arrive,  Michael Aspel and ITV primetime, no less.