One of my favourite sections of Domini Mortum occurs quite near the beginning and takes place in the village of Pluckley, Kent.  This village, for those that have never heard of it, is supposedly the most haunted village in Britain.

The central character of Domini Mortum, Samuel Weaver, visits this village as part of his investigations into the killer Sibelius Darke.  On his first evening in the village he finds himself in the company of one of the locals, Edward Higgins; a man who claims to be a, "Ghost hunter and paranormal expert of professorial proportions!”

Engaging on a Ghost Walk of Pluckley, in this short excerpt Samuel and Edward stop at Frith Corner, a local 'hotspot' for spectral activity. 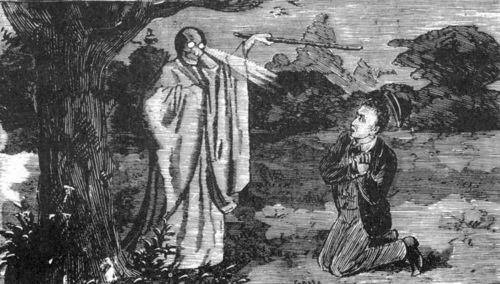 I looked hard into the surrounding darkness.  There was no hint of ghostly apparition, no sign sent from the other side, nothing.

After a few moments silence I could not help but let out a small giggle.  Higgins glared at me and I spoke.

“Do you still have enough in your flask to share, Edward?  I would hate to face the dead sober.”  His eyes remained fixed on me for a second before shifting to the floor as a smile cracked across his face.

“You are a fine audience, Sam, although not easily shocked and scared by what Pluckley has to offer.  No matter, I have enjoyed your company and shall enjoy it some more back at the Black Horse.  I was going to show you ‘The Devil’s Bush’ but fear it might be time wasted.

“Oh please, dear Edward,” I laughed taking the flask from him.  “The Devil’s Bush?  How can I return to London after visiting this village without saying that I had seen The Devil’s Bush?”

Smiling, he sighed and pointed to a large bush which seemed to stand apart from the rest of the undergrowth.

“This is the Devil’s Bush!  A bush said to have grown from an enchanted seed sent from the Judean desert, where Jesus himself met with Satan.  It was transported by dark forces and planted by witches during a ritual in which the blood of a sacrificed child was used to water and feed the earth in which it was placed.”  He took a small drink before continuing.  “Stories are told of how acolytes of witchcraft come to this site to perform dark sacraments.  It is said that, if a person is of cruel mind and wicked intention, they should dance around the bush three times calling upon Satan to appear to them!  Once upon the earth he would bring about the end of days destroying God’s world and bringing an age of darkness.”  His voice had risen to a bellow and he raised his arms into the air as he finished.  I struggled to contain my laughter.

“Come now, Higgins are you really trying to say that if I dance around a bush, that the devil in all of his demonic glory will appear before me?”

“Well of course that is the tale.”  He answered.  “No one has ever been so far out of their right mind to try it of course – and I should imagine that the devil will only appear to those that he wishes to visit.”

A nervous sheen had crossed his face now as he saw that I had started to circle the bush slowly.  He let out a stuttered laugh.

“I wouldn’t bother, you know, Sam.  Trust me I know about these things, the wind is not right, the moon too bright, he’ll not be appearing, you should stop.”  He pulled his everlasting flask of cherry brandy from his coat pocket and took a lengthy swig.

I was not to be dissuaded and began to dance around the bush, arms raised in the air.

“Come forth, Oh Satan!”  I called in mock reverential tones.  “Show yourself to me and my good friend here!”

“Where are you, Dark Lord!  Stir yourself from your pit in hell and come to this magic bush in Kent!”

“Stop it, Weaver!”  Higgins snapped.  “You are wasting your time and mocking the spirits.  I shall have to call a halt to the tour if you continue.”

I did not care, the tales of my esteemed tour guide were nonsense anyway.  Stupid lies, created to scare the ignorant and infatuate the gullible.

“Where are you, Beelzebub?  Is the cold night air not to your liking?”  I had begun to laugh hysterically now, a combination of the alcohol that I had consumed with such relish, and the preposterous nature of my actions.

Not a hint of the devil appeared.  Not a scent of sulphur, no eternal flames of damnation, nothing.  I slumped giggling to the floor at Higgins’s feet, laughing maniacally.

“There you are, Higgins old boy.” I pointed.  “There is your magic bush in all of its stupendous glory.”

“Well, I warned you that the night was not right.”  He said, but his eyes did not move from the bush and the metal flask remained close to his lips.  “Come on, Samuel, to your feet.  The hour is late and we should return before it is too late to order more booze.”

I had started to right myself, pushing up onto my elbows, when a sudden breeze blew through the branches of the trees above our heads and the evening fog began to shift and swirl in the air.

Immediately my laughter stopped and I felt coldness within me.

We froze in silent stillness as we watched the grey mist collect and join, sculpting itself before us.  To our horror it took shape from the base up, the contour of a man slowly being created.  First the feet, then legs, torso and finally head.  Although still ethereal in nature, the mist appeared to solidify further and detail was created on the form.  He was well dressed; in smart formal clothing, with tailored trousers, a waistcoat complete with a chain leading to its pocket obviously containing a watch, and an overcoat.  As the head slowly formed I started to see that it was that of a relatively young man with shoulder length hair, a clean shaven, angular face and sharp searing eyes which stared directly at me.  Was this the true face of the devil?

To my terror his lips began to move although at first there seemed to be no sound.

“Are you seeing this, Higgins?” I stammered.  “Tell me that you are actually seeing this?”  My guide did not reply but I heard a soft gurgle as he took another drink from his flask.