Christmas is not just for the Jolly

As the seasonal madness takes its grip on the nation, I wish to take a few short moments to talk about this supposedly ‘jolly’ time, where not walking around with a fixed grin is a punishable offence, binge drinking is encouraged by society and emotional blackmail of one form or another becomes an almost hourly occurrence.

Now don’t take me for a complete Grinch.  I am an amiable sort really, when it gets close to the actual day. I’m as full of festive cheer as the next grinning loon, I just get overwhelmed by the commercial assault on the senses that seems to be increasing by the year.

To battle this worldwide seasonal illness in my own small way, I try to ignore the desperate pleas of the multi-million churning commercial behemoths, who each year become even more refined and expert at mind control of the masses through advertisement, both openly brazen and subversively subliminal.

It’s a difficult thing to ignore, especially when the eloquence of their control is such that it spreads like a parasite in the minds of all who fall subject to it.  For me it makes the back end of November onwards a parade of scenes reminiscent of ‘Invasion of the Body Snatchers’ (both versions are equally demonstrative, Siegel’s being my favourite, although the sight of Donald Sutherland, hand outstretched and screaming in Kaufmann’s 1978 film holds an especially dear memory for me).

My refusal to be involved in seasonal hysteria has me labelled grumpy, miserable and no fun.  If this is what being independently minded enough to not want to be told what to do then fine, I am happy to wear these badges of honour.  I am not the Grinch however, although I enjoyed the film (as much as I could enjoy any of Jim Carrey’s formulaic face bending and noise making cinematic attempts). There is something about the story that sticks in my craw.  Perhaps it is the Hollywood niceness of it all, a cute dog that is smarter than its owner, a cute kid complete with cosmetically enhanced upturned nose.  However, I think it has more to do with the way that The Grinch had a back story that explained his apparent grumpiness, which involved lost love and bullying.  What is so wrong with being a horrible, mean spirited monster just for the sake of it?

Which brings me on to a much more appropriate monster who is getting some long overdue coverage this year - The Krampus. 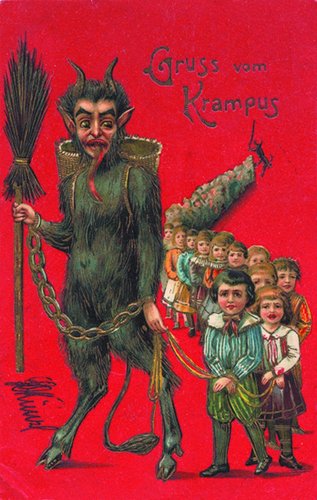 Now I will admit to being unaware of The Krampus’s existence until a few short years ago, he seemed to have been lost over time for most of the last century and relegated to small Alpine folk festivals, but when I discovered him it was like a bright but shadowy light had been cast into my soul.

Krampus is quite simply the antithesis of Father Christmas, a horned devil sent out into the world to collect naughty children (because let’s face it, not all of them are little angels are they?)  Krampus fits into Christmas very well as far as I’m concerned.  It is all very well telling children that they have to be good for Father Christmas or they will end up on the naughty list, but what is so bad about this list?  Where is the consequence?  Thank you, Krampus you fit the bill quite nicely in terms of scaring the little darlings into behaving.

There is, this year, a movie called ‘Krampus’, a ‘what would happen if this mythical beast visited a small town American home’ type affair.  I’ve seen the trailer, it follows a horror by numbers formula, but I will reserve judgement until I actually see it.  For me there are already a number of great Christmas movies which suit my tastes out there, (the best being Rare Exports, a Finnish film which ticks all the boxes for me). 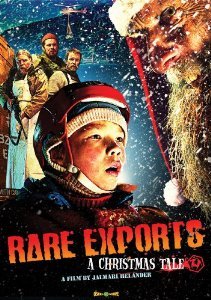 So enjoy the festive season, please do, but remember to not badger everyone that you see not wearing a Christmas jumper or novelty socks.  They are not necessarily grumpy or Grinchy, and besides, behaviour like that could get you on Krampus’s naughty list.