An Old and Gruesome Tale 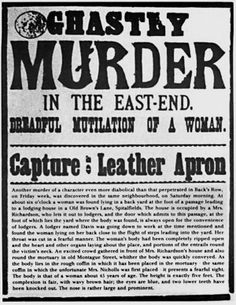 Chain me not in Heaven

They said she was evil.  They said that she’d go and burn in hell for what she done to them kids.  All I can say is that when I saw her laid out on the slab in front of me, all cold and lifeless, I thought she the most beautiful girl I had ever seen.  When Old Barleykins left the room, I told her so as well, told her that I would have given anything to meet her, to look into her eyes and tell her that she was the only girl for me and that we should be together forever.  Nobody saw it but me, but there was the chance of a smile across her dead face then as she listened to my words.  That little curve of her blue lips was all the sign I needed that she loved me right back.  But she was gone, strung up by Berry himself and there’s only ever been one to escape his noose.

I spent the night in The Two Brewers and had spent up all my spare ready for the week.  I thought that I could forget the sadness that had come upon me; forget the woman of my dreams, as she was already dead.  Little did I know that back there in the infirmary we had made a bond me and her, and it was a bond that would take me to places I never thought existed - dark places.

Back at my lodgings, is when she first showed herself. As I drifted off to sleep, that’s when I heard her voice, it was soft and soothing and I knew who it was.  She was stood at the end of my bed.  Pale she was, whiter than when I saw her at the infirmary, but then she was just a shadow, a whisper of a frame, beautiful and untouchable to me.

“Want to be with me, do you?” she asked and I felt like just reaching out and touching her.  “I can make that happen, my lover.  I can make it so that we’ll never be parted.  You just needs to do me some work, my good man.”

I couldn’t speak, I was enchanted, I looked at her face and took in her beauty, then nodded to show that I was game.  I would do anything to make her mine.

The next night, I set about our dark business.  “Start slow,” she had told me, “build up a reputation.  You need to work at this if you want to find me at the end.”  Just after midnight, I found myself outside George Yard Buildings where I waited just behind the archway in the dark. “Be patient,” her voice whispered in my ear, “You just be patient, my man, and you will get your rewards.”

I heard the drunken footsteps approaching, I felt my hackles raise and I gripped my blade so hard my knuckles cracked.  The first blow was the hardest and my, did she squeal, but only for a moment, because my gander was up and I felt the blood rushing through me as I tore at her.  All the time I did it, I heard my darling’s voice calling me on, telling me to rip her, telling me to do my work.  I left our first at the bottom of the stairway and made my way back to Wentworth Street.  Lucky for me I weren’t seen, because I was covered in claret and shaking with the excitement of it all.  I got to my room and shut the door behind me, breathing hard.  My love was stood there waiting,

“Grand work, lad,” she said, “very good for a first go, but you got to get better if we’re to be joined.”

A couple of weeks later I played my games again down Buck’s Row.  I enjoyed that job, took my time and used one of Mr Barleykins sharp knives from the infirmary.  All the time she whispered to me, telling how with each splendid slice I would get nearer to her.

I worked hard for her and kept my day job going, I even helped Barleykins when some of the ladies was brought in.  I had a smile when that happened and I could hear a little laugh from my girl, not loud enough to be heard by anyone but me.

Soon my night time doings were the talk of the town, how I enjoyed visiting the Ten Bells and listening to boys and girls talking in fear of my works.  Sometimes I just wanted to cry out to them, ‘It is me! I’m the one they’re looking for!’  I would laugh like a drain at their scared faces as they choked on their drinks.  My lady kept me quiet though, kept me under her spell she did, with promises of love and whispers of those terrible beautiful things that she wanted me to do for her.

It all finished just three months after it had started, our work, I had really got a taste for it, becoming a real master at cutting, taking bits out when I wanted to and making a pretty mess for me and the dear old boss to go through the next day.

When the last one came, she told me to make it my best and give a good account of myself, I did the works as well as I could.  I had time and I showed patience with my knife, slicing at her parts and cutting at her very soul.  By the time I had finished her there she was a proper mess and I couldn’t help but smile when the final cut was made.

“You’re done now, my man,” she whispered as I left the whore.  “You’ve earned my companionship, just as I promised.”  So I walked to the river and threw in my bag of tools, keeping one back for the last job.

I watched the black drops fall silently into the water below.  As my strength left and I dropped, it was like falling into her arms, the water was cold but I was warm, in the embrace of my love.