The Diary of Losing Dad

I walk through the vast concrete maze of wings and signs, eventually making it into a lift. It pings. Everything is in slow motion. I glide through each door (the valium is kicking in.) Time, seconds lengthen. Stretch. Drawn out by anticipation that is both urgent to see him and fearful of what or who I will find. I am completely lost. A kind man steers me to the right place. I sterilise my hands and pass a sea of curious eyes. And then at the end of the ward…

You.
Lopsided.
But Unmistakable.
Oh Dad.

You cry floods. I have never seen you truly cry before. And I had not prepared myself for this. You are so happy to see me and squeeze my hand in the tightest grip. I kiss and stroke your head. Touch the cool skin of your left arm which is asleep on a little pillow. A layer has been taken off and I can see so much in your eyes. You are achingly vulnerable. Achingly loveable. For an Oxford man, it strikes me, for the first time, that your eyes are the wrong shade of blue. Pools of pale grey staring inquiringly at me. I ask what you’re looking at, and you say ‘I’m looking at my beautiful daughter’. A nurse asks, ‘Is that your Grandpa?’

With all my dearest things.

Put you in a square box.

Carefully fold the box around your form and sellotape the edges.

I'd look after you.

(I'd cut a hole so you could breath.)

We cry and laugh so much, we decide that we need to find a new word for crying and laughing at the same time; Craughing? Dad knows the names of everyone who works on the ward and softly but emphatically says ‘these people are brilliant’. The porter, Victor, ‘a very good man’ is gentle in manner and voice.

He wheels along to deliver Dad’s supper at about 5pm and Dad greets him warmly, despite his unappetising cargo. His nurse Kim, is deeply caring but also quite strict, wanting to push her patients on the stroke ward as far as possible, aware of the enormous journey that they have ahead. She tells me that I must go to Bollywood.

After I arrive on the second day, Dad has just finished doing a lovingly detailed pencil drawing of Arthur, the slightly vacant looking patient in the bed opposite. I notice that Dad has signed his masterpiece at the bottom. Dad’s eyes swell with emotion as he instructs me to take the picture over to Arthur, who is leaving that day, and give it to him as a parting gift. As he places the picture into my hands, Dad weeps uncontrollably - completely overwhelmed by his own gesture, nodding enthusiastically as I walk tentatively across the room towards his (I now think perhaps half- sedated) ward-fellow. Arthur takes the picture and looks at it with confusion. But I reassure Dad afterwards that it was very special moment. I wonder if Arthur still has it. If it meant anything to him.

Another of his ward-fellows is a beaming man in his 80’s or perhaps even 90’s. He looks at me with glittering eyes and says, ‘You are a gorgeous girl’. I blush and thank him, and he says ‘I speak only the truth.’ After a pause, he then adds ‘what deck are we on?”

The headmaster (Dad) now has ‘homework’. He has daily sessions with an Occupational Therapist and a Speech therapist. Regaining his balance and learning how to swallow properly again are all important first steps. He has a sheet of tongue-twisters that he has to practice daily. His voice is much smaller, whispery, less sure inside its body. We have a bash at ‘I’m not a pheasant plucker, I’m the pheasant pluckers son and I’ll be plucking pheasants till the pheasant plucker comes’ which he fails to see the humour in and instead attempts with such focus that it looks like his eyeballs might roll together, like marbles, and meet in the middle. He is immediately all-embracing of any suggestion, seizing on it, entirely suggestible, entirely vulnerable and determined to get better.

The sentence, ‘Give the dog a biscuit’ causes his eyes to well up. He misses Boris. Each burst of tears starts with a pained frown, which moves down to a wrinkle of the nose (like he might sneeze), to a wobble of the chin, which moves through the lower lip until it sticks right out, like it could catch tears from heaven, which are surely falling in pity at this sight. It is a shuddering, devastating cry that feels out of his control. Changing the subject and distracting him is a technique that we quickly learn to master, but it can feel like trying to keep a car from swerving off the road. When we announce that my brother Ed is coming to visit from Dubai, his eyes fill with wonder and emotion, the nose starts the ill-fated wrinkle. His small, amazed voice: ‘To see me?’ We nod. ‘On a plane?” It's agonising and adorable and heart-breaking and hilarious. There are sudden outbursts of frustration too: ‘It’s AWFUL when you’re not here. I HATE it.’

Interspersed with the emotional highs and lows are moments of practicality and clarity - he wants pyjamas with a fly. He wants me to make sure that Mum is ok.  That the dog has been walked. His glasses, or “specs" as he calls them, always sit wrongly. One of the arm ends now sits inside his left ear, rather than on top of it. He can’t feel it or is too tired to care. It is unbelievably lovable in its wonkiness.

Four children grew up under a shady tree.

And the tree was you.

And the youngest of the children was me.

When lightning struck – the tree fell.

They heard the terrible fall, and frightened hid indoors, until it was quiet.

There, at the bottom of the garden, the tree lay.

At this height, they could look at it more closely.

They notice things they had never seen before.

The tree needed them.

It hurt when they sat on it.

Can we stand you up again? 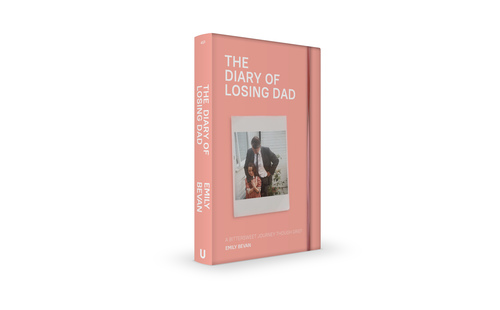