Warm and heartfelt greetings to all our pledgers! And a polite nod to the rest of you.

This is likely to be the last update from us before publication, as Unbound has informed us they will be closing the door on new pledges this week. If you have not already pledged, you have until MIDNIGHT, THURSDAY, 13th Sept to do so, and get your name in the best book about South London since 1947*.

The book has now been edited, proofed and typeset, at enormous mental and physical expense - fortunately not to ourselves, but a wonderful team of experts. Thanks in particular go to James Attlee and Andrew Chapman.

So, Ned Boulting has written the foreword, Emily Medley has drawn the illustrations and our unpaid interns have written the book. The final piece of the jigsaw is the cover, and we’re delighted that internationally acclaimed graphic artist, Neil Gower, has agreed to design it for us, based on a sketch we drew on a beer mat. More usually associated with creating artwork for authors such as Bill Bryson and Jane Harris - not to mention having done covers for reprints of John Buchan and William Golding books - Neil has kindly agreed to sully his reputation by being associated with us. Hero.

All being well, the book will be published in mid-October - and in the hands of pledgers at some point after that.

Finally, in a World Exclusive for London’s much-loved premier “books ’n’ booze” literary event, Brixton BookJam, we will be performing (mercifully short) readings from the book at the Hootananny, Brixton, on Monday, October 1st, along with some proper writers. If you are in or around South London, why not come along and say hello. It's free, if that helps. And, let's face it, there's nothing like getting blootered on a Monday.

Talking of which, we're off for a pint. Thanks for your support! 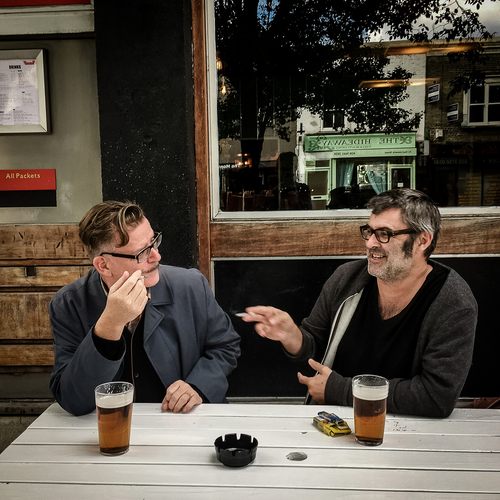 *Also, the only book about South London since 1947