Contrary to popular belief, Deserter has been a hive of industry during our campaign to fund our book, Today South London, Tomorrow South London. Why only yesterday the Dulwich Raider leapt up from his desk and turned his music off so he could focus on the blank page. 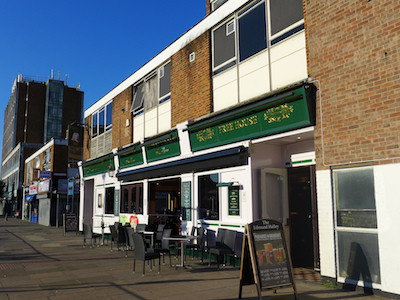 After a few excruciating moments of silence he turned it back on, exclaiming, “Do you mind? I’m beginning to hear myself think.”

So back came The Very Best of ELO, as we ruled out silence as optimal for productivity and tried a hoppy pale ale from the fridge.

“I’ve got an idea for the book,” he soon declared, excitedly. “How about we take the rest of the day off for cogitation purposes and hit this mofo hard first thing in the morning, after lunch?”

And there is nowhere better for clarity of cogitation than a brown boozer. That’s just science.

And that is where, after emptying our minds of anything that could be described as coherent thought, I came to put together the notes of a new Deserter tale.

“Been on any more school run pub crawls, lately?” asked the barmaid, as we embarked on a rare ‘day off’.

The school run pub crawl. It all came back to me. Some of it. The day I’d woken up in the unmistakable fug of too much of everything except sleep and accidentally went on a pub crawl between dropping my kid off at school and picking him up again.

As any medical professional would advise, I went straight to the greasy spoon after the drop-off to treat my hangover, along with my mate, Spider, who had very much helped me acquire my condition. Spider’s eye was caught by the Edmund Halley, next door, a Wetherspoon's named after the astronomer. And thus, we soon opened the gates of science to explore.

We all know a hair of the dog works, though it’s not always advised at 10am. However if it works AND is delicious, what sort of fool would you be to refuse another one? An idiot fool, that’s what. So we wisely had a second before setting sail on a daytime crawl that would take in history, mortality, space, socialism, a graveyard and a packet of fags.

And you can read all about it when our unpaid intern finishes writing our book. Cheers.