On Monday afternoon, the Raider and I emerged into the day, squinting at the light; our hair, beards and toenails hideously overgrown, our clothes mere rags, our aroma - ripe. 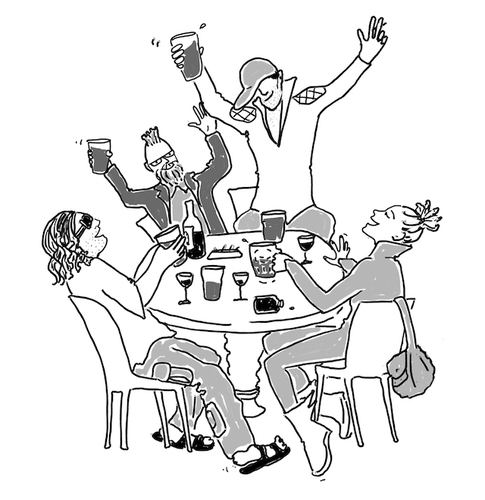 We had finished our manuscript. It was now flying through the Internets to our publisher like mere data, albeit data containing hundreds of valuable swearwords and precious pubs.

We didn’t need to consult about what to do next. It were pint time. We virtually skipped down Grove Lane, Camberwell, knowing that first sip would be akin to Alexander’s after the conquest of Anatolia, David’s having slain Goliath, Sonic’s over the fallen Dr Robotnik.

The curved corner of the Hermit’s Cave afforded us a smooth approach to happiness. I pushed on a door filled with promise. It didn’t seem to want to open. So I pushed it again, harder and with profanity.

“Closed…?” breathed the Raider, in disbelief.

“Nooooooooooooo!” I cried at the unjustness of the cosmos. “Open up! We done a book!”

It was no use. We had to accept it. We had been badly let down by humanity’s enduring grudge against Mondays. We would have to initiate Plan B, which was very like Plan A, except at a different pub. But which pub? The Stormbird - closed. The Camberwell Arms - closed. The Tiger - closed. The Bear - closed. The Joiners? No beer good enough for the occasion. What the blessed fuck is wrong with this country?

There was no way we were going to be denied a pint. Should we trudge up the hill to the Phoenix, we pondered? We’d just come down a hill. It was too maddeningly wrong.

The Raider suggested we at least try the Old Dispensary. Not noted as an ale destination, it was nonetheless a house of good times and, crucially, open. And despite our fears they did have Lagunitas IPA with which we duly celebrated the end of a period of cruel irony, when we’d actually had to do some work, writing about not doing any work.

Over the bar hung a t-shirt, proudly declaring, “More Blacks, More Dogs, More Irish”. The air was stale, if not fetid. We were in South London, where we belonged.

So what now? Well, we’ll be working with our editor over the next couple of months, followed by a book designer, before we get on to the serious business: Where to have the launch party?

Thank you for your support and please excuse our recent radio silence. We’re back now. And boy are we thirsty.