ALWAYS BE YOURSELF, AND SOME OTHER PEOPLE. 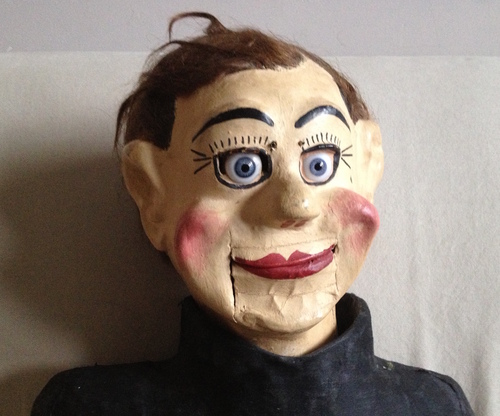 This is Sid, alias Sailor Boy. He's a ventriloquist doll. A doll, not a dummy: Sid, like all vent dolls, doesn't like being called a dummy. Please don't annoy him. I want him to be on his best behaviour when he comes to the launch party for my novel, Dead Writers in Rehab. If you'd like to come to the party, and meet Sid, there are places left. Pledge, and you'll get two tickets, plus a signed hardback copy of the book with your name in it, plus the e-book.

I'm glad Sid is coming to the party, because some elements of the novel involve a kind of ventriloquism. At certain points I write in the "voices" of Coleridge, Hemingway, Dorothy Parker, Hunter S. Thompson, and others. This is a dangerous undertaking, for two reasons:

1. Great writers are easy to parody but difficult to imitate. And even though I'm not trying to replicate those writers' voices but to evoke them, and no matter how well I do it, some people may be outraged by my appropriation of their favourite author's name and style. All I can say is that this is a labour of love and respect for those authors. Also, it's not the main point of the book, but that's another story, literally.

Let me explain how these two issues are linked. It's difficult to think yourself into the mind of another writer. Obviously, reading their work is a big part of it. But a particular kind of reading is required. Most good writing has the power to make you forget yourself, and that's part of its pleasure. However, I wanted to do more than that. I wanted to forget myself and become someone else: I wanted inhabit the writer's mind. But that's not possible. The words I'm reading aren't a doorway into the writer's mind: they're what the writer is using to open a doorway into my mind. The author's writing is a conscious attempt to communicate thoughts, feelings, images and experiences, which I absorb, for the most part, unconsciously. But for my purposes I needed to participate in the process consciously: rather than lose myself in the writers' work, I would welcome them into my mind, give them the best chair, pour them a drink and put all my faculties at their disposal.

I think it worked, sometimes. And on those occasions I believed, on the basis of no scientific evidence whatsoever, that a kind of neuronal alignment was taking place. I felt I was enhancing the plasticity of my brain, and its capacity to form the fresh neural pathways that are created by every new experience, and reinforcing those patterns. This resulted in a regime of reading an author for an hour, then going directly to my desk, with my mind empty of everything except their work, and allowing it to inform what I wrote as comprehensively as I could. Did I succeed? You'll have to judge that.

As for demonic possession, sometimes I got the feeling the authors were abusing my hospitality. My intention was to welcome them into my mind as guests, in anticipation of a civilised literary tutorial. Instead I became the victim of home invasion by highly articulate vandals, who trashed the place and refused to leave. My mind was not the salon I'd imagined, it was more like Jesse Pinkman's pad in season five of Breaking Bad, infested by a swarm of depraved meth-heads.

This is the great risk of ventriloquism. When you lend your voice to someone else, can you be sure they'll give it back? Although a ventriloquist's doll isn't someone else, of course: it's part of him. My literary ventriloquism differs only in that the authors I'm lending my voice to have an independent existence – until I invite them to become part of me. Then the process is the same, and creates the same dangers.

Ventriloquism has always been a dark art, and its history gets darker the further back you trace it. Before ventriloquism was entertainment it was magic. It was associated with prophecy, madness, possession and witchcraft. Even in its modern form ventriloquism is disturbing and transgressive, unless you're doing it wrong.

Sid doesn't always agree with me about this. To be honest, I don't think he can accept that we're two aspects of the same person. In fact, I had quite a vicious argument with him earlier, which is why he's now back in his suitcase. But I can't concentrate. I can hear him, squirming around. And sniffing. Is he weeping, or does he just want me to think that? He's very manipulative, and he knows how to push my buttons. Oh dear, I'll have to let him out. Wish me luck.

If you'd like to meet Sid, have drink with me, and own a signed, special edition of my novel, click on the PLEDGE icon on the top of this page, and then LAUNCH PARTY in The REWARDS column.

If you'd like to read more about the neurological basis of some of my speculations, in a piece with a link to some real science in it, click HERE

A copy of the hardback print edition plus the ebook