The Curative Power of Words 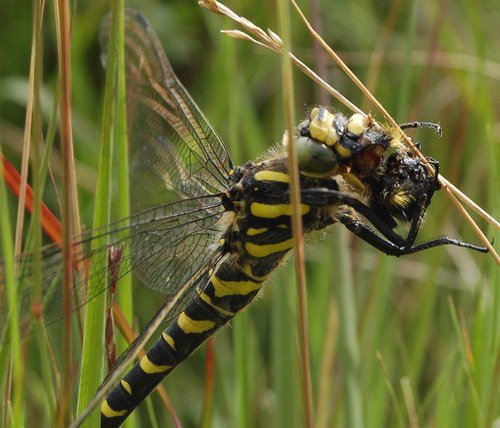 I have no idea why there is an image of a golden ringed dragonfly devouring a bumblebee accompanying this post. There's not even some vague thematic segue to be made. But it looks good. I took it on Dartmoor a few summers ago, and squatting carefully down beside it, I could hear the crunching and slurping.

Anyway. Thanks to all the new pledgers, up to more than 60 people now, helping bring Dazzling the Gods into the world. Here's a brief post about my literary journey, from parochial, idle philistine to, well, parochial, occasionally idle person who writes books.

'You’d better search out some sedentary hobbies.' I can still recall this advice following diagnosis of a potentially life-shifting illness, one that would curtail most of the activities a twenty-something would indulge in. At the time books were something entirely alien to me; they belonged to an introspective, scholarly realm I had no interest occupying. I was gregarious, cocky, never sat still long enough to consume a shopping list, let alone a whole book. What purpose did literature even serve?

Funny what enforced idleness can do.

Kafka came first, which might have deterred many from persisting, though I suppose I found succour in his characters’ alienation. Then Márquez and Woolf. Then a sustained period of less literary work. Thrillers, crime. A non-fiction year, then back to more highbrow stuff.

Books began to offer solace, narratives that bestowed both escape and contemplation. Whole worlds opened up, beguiling, immersive. Symptoms, if not forgotten, then certainly downgraded. And so began a transformative decade, one in which I asked myself: How hard can it be to write a book? Answer: very. But, hell, I wasn’t going anywhere.

Four books later, I wonder the life I’d be living had illness not resided so emphatically in my world. Whether, given the chance, I’d have changed anything, swapped it. Perhaps. But from great hardship can come a triumph of sorts, a journey, if not fully understood, then one to be savoured. Perhaps I'm the bumblebee. Or the dragonfly. No, it's not working.

Thanks for all your support.