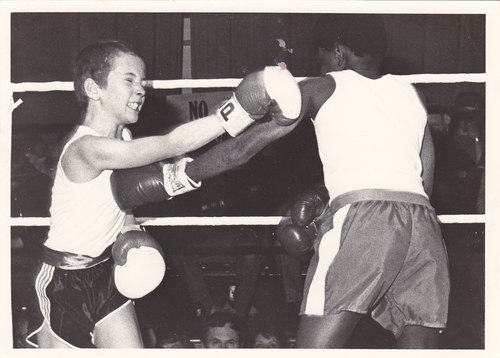 I’ve made a habit of coming second recently. Which is fine in certain arenas: a marathon, a search to find Britain’s two most handsome men. Less so in others: a game of conkers, a fight to the death, love rivalry. I think it began with my amateur boxing career (I’m the one on the left above, the one with his eyes shut), a pursuit I excelled in as a runner-up. I remember the solitary time the referee raised my arm at the end of a bout, the sense of confusion, of embarrassment that a sufficient number of my wildly speculative punches had somehow landed. Didn't last for long.

Prudent enough to escape the ring before coming second meant serious, face-alterting pain, I needed new avenues to fulfil my penchant for failure. Job interviews and writing residencies have proved an unending source, so much so I almost attend them with nonchalance these days, knowing no matter how I perform, the call will come announcing it was such a close thing, that it could have gone either way. Short story competitions, too, have provided a fertile realm in which to exhibit my silver medal propensity. Of course it is churlish to bemoan what is regarded as a significant achievement, but there comes a time you’d gladly exchange ten of your seconds for a once-off atop the podium. This is amplified when such prizes mimic pugilism in their winner-takes-all status, and you end up giving away your best work for free.

Anyway, I have another interview next week, where it will be hard not to attend with the demeanour of indifference Morgan Freeman mustered in his final parole hearing of The Shawshank Redemption. Well, it worked for him.

Thanks hugely to all new pledgers for Dazzling the Gods. 120 of you now, which is really humbling.

I know the feeling, Tom. I hope you get the job, you deserve all good things.