Here's a picture of my cat, Mabel, which acts as both cynical ploy to draw your attention (apparently it works on Facebook) and clumsy allusion to Schrodinger's thought experiment. 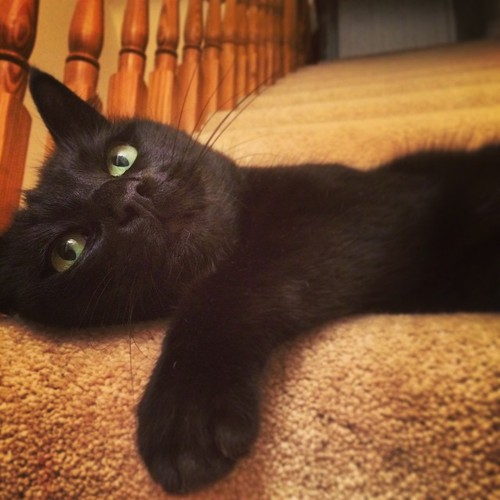 You see, my collection of stories both exists and does not. It is there on my hard-drive, stored as a series of ones and zeros (I think), a file of around 190KB, innocuous and without form. And yet it's so much more than 40,000 words, 182,000 characters (no, not those sort). It's a curation of, I think, my best work, a dozen short stories hewn from all I know about a literary form that is both formidable and obscenely hard to pull off. A decade's apprenticeship. Everything I know, feel and understand about what it is to be human, what it is to love, to hurt, to win, to lose.

And so a massive thank you to the 108 lovely folk who have pledged for Dazzling the Gods, who have faith in something that doesn't actually exist in physcial form yet. We are 30% there, but of course there is a long way to go. And this is the bit I hate, the bit all artists loathe, yet are compelled, especially in this age, to do. To ask friends, family, strangers to help support the book into existence. Because without you it will remain just a series of bytes in a lonely file on my (electronic) desktop.

So I will be immeasurably grateful if you can help spread the word, give a little tweet, forward an email, nudge/coerce a friend. There are some great new rewards on offer, including a week's writing retreat at my lovely Devon home, complete with tuition, meals and wine (though I should probably subject you to a personality test or some such, and I am slightly worried about the one or two stalkers I've managed to shake off re-emerging). And with all the rewards, you get a beautiful hardback book with your name in it, one that would not have existed (the book - your name would have) without your support.

I mean, just look at that little face up there. I'll probably have to send her back to the rescue centre if the book isn't published.

She is adorable. I've tweeted the link. Best of luck, Tom.