As I type this we are just £2 shy of 92% and only a few hundred pounds from reaching our target. Such a great achievement – thank you one and all!

Seeing as we’ve taken another step closer to publication, here’s another Darwin’s Soldiers excerpt, this time from when we first meet the Tocka.

A group of soldiers have stumbled on a fossil-rich cliff face where Gal-qadan, the Mongolian horseman, has just killed a Mayan warrior…

The soldiers stepped away from the blood which pooled in crevasses and curves.

‘What have you done, Khan?’ Tode asked.

Gal-qadan gave a rare smile, revealing his blackened teeth. ‘You will see,’ he flicked his hand, ordering him to move.

The Mayan had stopped convulsing, yet the blood poured from his opened veins. Gal-qadan kicked his weapon to one side and rolled the body over with his foot, spreading blood to more dry rock while his men looked on in horror.

He could feel tremors within the rock: it was working! He climbed further up the cliff to watch as the crimson blood soaked into the rock. A curve of leg vibrated here and an eye blinked there, followed by spasms and mini-earthquakes which shook the dust and crumbled the stone.

‘What the hell’s going on?’ Ethan stepped back with a wary look over his shoulder into the forest.

‘He’s waking the fossils,’ Kastor skipped around the rock and up to a safe ledge with the look of a child ready to open presents.

A sound could be heard, muffled at first but becoming clearer: tock, tock, tock-a-tock.

From his vantage point, Gal-qadan saw cracks spreading across the ledge. Stones were shaking free from the rumbling mass and small boulders rolled onto the grassy floor.

‘Look at that!’ Ethan pointed at a leg breaking free from its stone prison, clawing at thin air.

‘There’s more up there,’ Kastor shouted. ‘There must be twenty horses trying to get out.’

Before he could draw his bow, Kastor leapt forward and speared the torso of the dead Mayan, releasing fresh streams for the rock to digest.

His men were learning to be wary of him, Gal-qadan thought with a smile.

Stones ran free, shaken by equine heads rising out of the dust and hind quarters struggling free with wild kicks. Gal-qadan listened to the animal’s sound. It was getting louder: tocka, tocka, tock-tock. He had assumed it was the sound of hooves clashing against the rocks but as a head broke free he saw a large set of sharpened incisors gnashing together: tock, tocka, tocka.

‘Steady!’ Gal-qadan shouted as the beast flung its head about: its wild eyes staring in fear.

The animal chomped in panic, shaking a foreleg free, then the other.

‘Make way!’ Gal-qadan shouted to his men. ‘Here they come.’

It was clear by their teeth that these horses were not grass eaters. These will be better than any steppe horse, Gal-qadan thought and found his cheeks ached from his permanent smile. His breathing was speeding up with the excitement and slowly turned into a deep laugh. ‘Run free!’ he shouted, forgetting where he was.

With a deep crack, the ledge gave way and crashed on the grass below. Gal-qadan caught glimpses of heads and legs; wild eyes and teeth but dust billowed up, masking the host of freed beasts who screamed and chomped in exultation. When the dust settled, Gal-qadan was disappointed to see the grass was empty.

‘Where have they gone?’ Tode asked.

Sounds echoed from the forest: crashing branches and deep tempo of running hooves.

Let’s work together to get Darwin’s Solders to 100% before Christmas!

Please share this link with friends, family and colleagues: 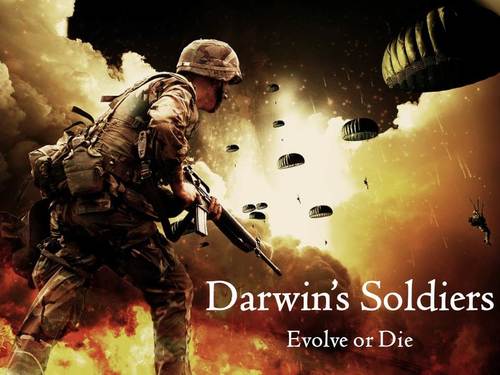