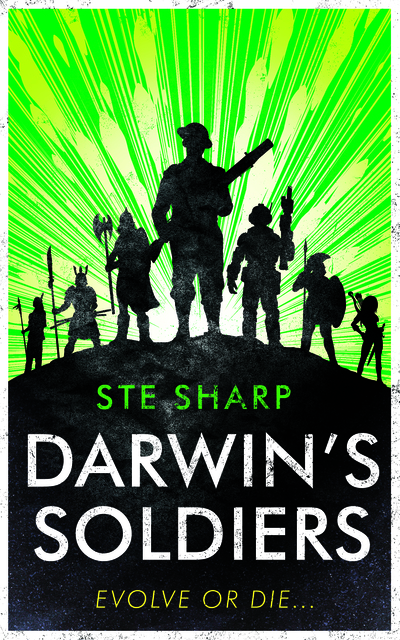 Fiction | Sci-fi & Fantasy
You made Darwin's Soldiers a reality. It's available in all good book stores now.
$8
37 pledges

Your opportunity to send what you can to help John get back home to his son.
$25  + shipping
20 pledges

1st edition paperback, ebook edition and your name in the list of Super Patrons in the front of the book.
$75  + shipping
10 pledges

An acrylic canvas painting of a Darwin’s Soldiers character by the author plus all Super Patron privileges.

Giclee print of the cover art, plus a 1st edition of the paperback, ebook edition and your name in the back of book.
$145  + shipping
6 pledges

Unique opportunity for 10 authors to publish their short story about a soldier, past or future, evolving a special power (500 words max) plus all Super Patron privileges.

John doesn’t belong here. He didn’t want to fight in the Great War in the first place then he was ripped out of battle and dumped in an alien land filled with soldiers from every era of human history. Haunted by the death of his wife and desperate to get back to his son, John joins the rag-tag group of soldiers, who have fourteen days to reach the silver gates.

Danger lurks everywhere and in the most bizarre forms. Sharks in the trees, subterranean wolves and even John’s body turns against him when his hand melts into his machine gun, leaving him crippled and defenceless. His companions change too: the Maori with his plant abilities; the Celt who can run at incredible speeds; the Arab with his ability to read minds.

Struggling with their new abilities, the army cross a scarred plain littered with ancient battles and populated by surviving alien soldiers. To complete their challenge the Humans must win a battle and soon encounter a blue-shelled warrior-race, the Brakari, led by their all-powerful leader, Belsang, and the twisted General Panzicosta.

Allies are made and deals done, but time is running out and battle is imminent.

Each warrior must use their enhanced powers, but will John be able to fight and will the Humans survive?

1st edition paperback, ebook edition and your name in the list of Super Patrons in the front of the book.
View all 8 rewards