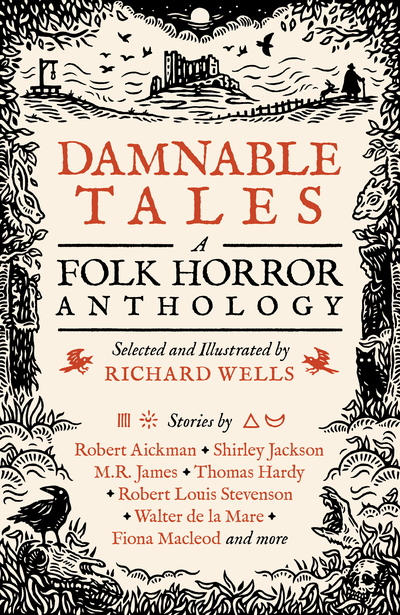 'Wicked witches, bad fairies, and the restless dead be damned, for those who are looking to fill up their folk horror fiction shelves, Damnable Tales is a must-have' Andy Paciorek, Horrified Magazine

'I had to keep pulling myself away from it so I didn’t finish it in one sitting . . . An incredible book' Annie Kapur, Vocal Media

This richly illustrated anthology gathers together classic short stories from masters of supernatural fiction including M. R. James, Sheridan Le Fanu and Arthur Machen, alongside lesser-known voices in the field including Eleanor Scott and Margery Lawrence, and popular writers less bound to the horror genre, such as Thomas Hardy and E. F. Benson.

These are damnable tales, selected and beautifully illustrated by Richard Wells. They stalk the moors at night, the deep forests, cornered fields and dusky churchyards, the narrow lanes and old ways of these ancient places, drawing upon the haunted landscapes of folk-horror – a now widely used term first applied to a series of British films from the late 1960s and 1970s: Witchfinder General (1968), Blood on Satan’s Claw (1971), and The Wicker Man (1973).

But as this collection shows, writers of uncanny fiction were dabbling in the dark side of folklore long before. These twenty-two stories take the reader beyond the safety and familiarity of the town into the isolated and untamed wilderness. Unholy rites, witches’ curses, sinister village traditions and ancient horrors that lurk within the landscape all combine to remind us that the shiny modern, urban world might not have all the answers…