A huge THANK you to all new Daisy Belle supporters, your wonderful, generous pledges mean the project has now reached 53% in two weeks! Please share it with anyone you think might be interested.

Today I’m introducing you to the real life figure behind Daisy Belle’s brother, William Beckwith, pictured below. Sister and brother swimming acts were popular in Victorian times, and Agnes and William Beckwith performed together from a very young age, even appearing in Paris in a glass tank.

William was a champion swimmer in his own right. He won the 500 yards championship in 1876 at Wenlock Baths in Islington, which had the longest bath in London. He held on to the title for three years at his home baths in Lambeth, which had the largest ‘first class’ pool in the city (for 'first class' people only).

In my novel, Daisy Belle has a very close relationship with her brother Billy, who is also a swimmer and diver. As a child he suffers from rickets and while initially mocked, he becomes a champion sidestroke swimmer. There were several famous swimmers with physical disabilities in Victorian times, such as John Henry Camp, pictured below. 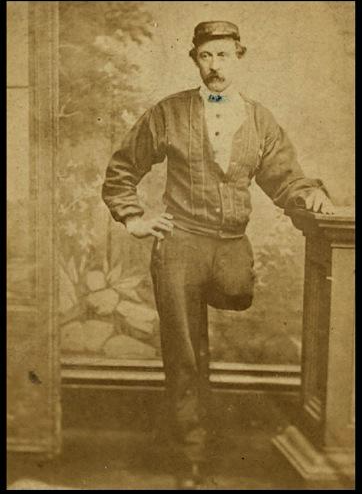 He was one of the founders of the Brighton Swimming Club, and served as president, captain and coach. In 1868 he took part in a pier show, billed as ‘Captain Camp, the one-legged swimmer’ where he amazed audiences with his ability to ‘prepare and partake of breakfast on the water.’ A sailor, he had had one leg amputated after falling from a ship’s mast.

Captain Camp saved at least 20 people from drowning, and the words on his tombstone read, ‘I dare the waves a life to save.’