THANK you to all the new supporters for Daisy Belle, for pledging, spreading the word and generally being brilliant. In just a week we’ve reached 36% of the total target!

Today I wanted to introduce you to the real life figure that inspired Daisy Belle’s father -  Fredrick Edward Beckwith, swimming professor extraordinaire, pictured below. He was born in Ramsgate in 1821 and was a renowned sidestroke swimmer, taking the title ‘champion swimmer of the world’ at the age of 33. 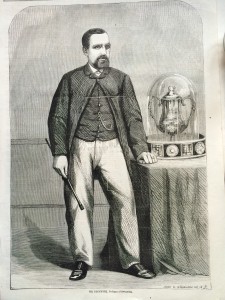 But Frederick had another skill; he was a showman and savvy promoter and he made a name for himself by organising aquatic shows, attended by thousands and with plenty of betting going on among the spectators. He was also an early trainer for the great Captain Matthew Webb.

One of the things I wanted to explore in the novel is the relationship between father and daughter. To what extent was Agnes Beckwith made to perform – considering she made her debut as a four year old – and to what extent was it her idea?

Either way, it was partly thanks to professor Frederick Beckwith that swimming became one of the very few sports to be seen as suitable for women.