Dear Daisy Belle supporters, spring has brought good news….Unbound have sold the rights to an audio book version of Daisy Belle, and the proof stage of the production process has nearly been completed, hurrah!

The manuscript has now been read by a proofreader, and she has thrown up a few queries. You would have thought that by now any problems would have been sorted out, but it’s amazing what a fresh pair of eyes can spot.…

For example, a character called Professor Parker has a son who is nearly 20 years old, and he also has a 14-year-old sister. Victorian families were large and this seems entirely possible to me, but if one reader has queried it then others might too. So perhaps the sister can become the professor’s niece, although a whole lot of other sections would then need to be changed.

The proofreader also questioned the expression ‘the air was beginning to darken’. I think air – atmosphere – can darken. But in the process of thinking about this I noticed that a similar phrase pops up three times in the book, which is far too much darkening air and that will need to change too.

Then there have been words that have been changed – ‘cocoa nuts’ for example have been altered to ‘coconuts’. I wasn’t sure if this was correct so it led to a good exchange on Twitter, where the very knowledgeable Lee Jackson of @VictorianLondon helped me out.

I spotted mistakes myself as well, for example why are holidaymakers in Margate in the 1880s shopping for supplies on a Sunday? Oops.

I’m also delighted that Alexandra Heminsley, author of the bestselling Running Like a Girl and Leap In, posted about Daisy Belle on Instagram. She was sent an early 'bindup' of the book: 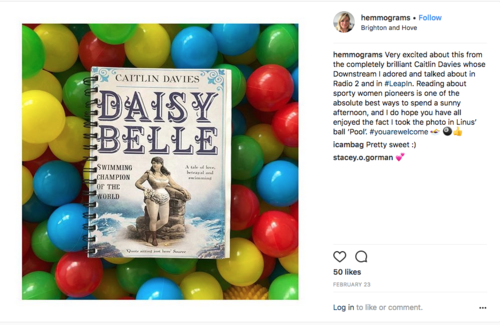 Once my response to the proofreader’s comments have been incorporated, the manuscript read over one last time, and the cover finalised, then production will soon begin. Thank you for your patience, getting a book out into the world takes a long time.