Copyediting: the book is almost ready!

Here’s an update on how the production of the novel is going. Last week I received the copyedited manuscript, which looks something like this: 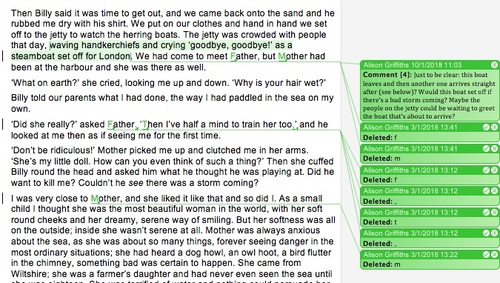 Mostly the corrections are in terms of punctuation, spelling, and changing awkward phrases or sentences. But the copyeditor, Alison, has also flagged up some more complicated issues. In the section above, for example, she is wondering why a steamship would set off from Margate pier in a heavy storm….

If I accept that she’s got a point then what do I do? I can’t change the weather, because something is about to happen due to the storm. So can the steamship be arriving rather than leaving? But then that will impact on the paragraphs that follow. So while it seems like a small thing, I have to struggle to get it right.

Here’s another example: the copyeditor has questioned why Daisy Belle has used a certain adjective to describe her life. I see what she means, and so I spend an hour trying to think of a better word. And then I delete the adjective all together.

A third example is when Daisy and her brothers set off to do a show in the morning, but don’t perform until the evening. Should I add how bored they grow waiting? Or should they set off for the show at midday and perform in the afternoon?

Copyediting can be mentally exhausting! But this is my last chance to make any alterations and to ensure the novel is as smooth a read as possible.

Meanwhile the cover will be ready any day now. The designer has shown me the roughs and as soon as the final cover is agreed on I will post it here, and very much look forward to what you all think of it.

We also have a publication date: September 1st, which is the anniversary of Agnes Beckwith’s first Thames swim.

That was meant to say ( before predictive text re-wrote it) “ could the stormy weather affecting the steamer not develop from a sudden squall ...

Hi Graham - the Soto emu weather is a perfect description of a storm on the Kent coast! and I know what you mean, it is a sudden storm. But as I have a steamship leaving and a steamship arriving, I decided to just cut the first one. I'm hoping that works. Although I do wake up in the night worrying about it..