You WONDERFUL bunch! Thanks to all of your generous support we have now hit 42% and the half way point can be spotted, flags waving, just over the next hill! THANK YOU so much for believing in this novel and its potential!

There has been much going on!  Two weeks ago I gave a presentation to the Empathy and Writing Group at Bath Spa University. The theme was ‘Animals and Empathy’ and I was there to discuss my previous understanding of animals from childhood interactions, my remarkable partnership with Grace, my guide dog and how she has affected me both as a person and as a writer. Key to this, and perhaps of interest to you lovely lot who were not in attendance, was the role she played in helping me create the character of Chris – the dog in my novel.

Given the novel’s dark underbelly, the fact it is based around disability, discrimination and actual current events (a woman WAS actually sanctioned and told she was fit for work whilst in a coma…) I was finding it at points somewhat depressing to write- until one day, out with Grace, I wondered about her take on it all. How did Grace sense the world? And Grace showed me a sensual, stinky, fascinating dimension from which I was able to concoct the exuberant Chris.

Chris becomes the light that stiches the novel together, the mindful, joyful, perpetually loving ballast that balances the whole shebang!

I have read a short extract for you and attach it here.  I hope it tickles!

Chris and the storm crow

The ground has been baked dry by the sun. Sharp miserable lumps of faded grass poke up from between Chris’s paw pads. Even so, the intense joy he feels, a giddying rush in his pelvis, stomach, head is lessened not a jot. Free! Free!

A crow watches him from the fence, its head cocked to one side. Chris gets a waft of its wormy black cynicism but chooses to ignore it. Crows are such utter snobs. Freedom isn’t just about being able to fly, you know.

Chris is sprinting to the horizon, puffs of dust rising up behind him. Faster and further. He has almost made it! Now he wheels around and gallops back again, head a whirl of happy speed and sensation, muscles stretching, heart pumping. Oh joy!

Alex is coming along. She is slow and talking into her phone, as usual. Chris pelts past her, heading towards the far field, the rush of wind lifts his ears, his tail whips in circles. And then, like a lasso, he is caught by a stink and must follow it. It leads him to another one, stronger. He squats and pees (guide dogs don’t raise their legs…most indelicate). Another lasso of stench. Golden trails of piss and pungent territory-marking. And that one…that could be a rabbit. That one, a dead insect. That one, an old mouse nest.

‘Storm coming,’ says the crow. Chris pauses and raises his wonderful nose, breathes the sunlight. There is not a cloud in the sky and almost no breeze, but crows can’t lie and yes, there it is, far, far away, a smell like the tinkle of far off Christmas bells, a glittering smell.

‘Going to be a doozy.’ The crow stretches its wings, looking down its sharp lacquered beak.

‘Righto!’ says Chris spinning around and dashing off again, feeling the whoop of wolf in his belly. Arroooo! He dives past Alex again, as if on the trail of a deer. He can feel blood-lust. He can feel power. Then boom, he stumbles over an old tennis ball...

In other news,  we had a lovely evening at the Corsham Book Shop last Tuesday too. I explained the concept and conceit of the novel, read some extracts to illustrate the affect of my craft choices and finished by talking about the Unbound process and answering questions. Huge thanks to all of you who made it and to Janet and Helen for hosting and for the very important wine bit!! 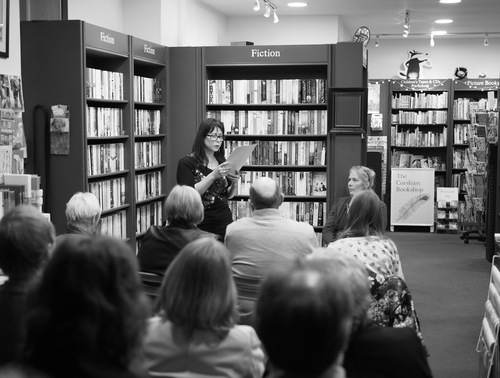