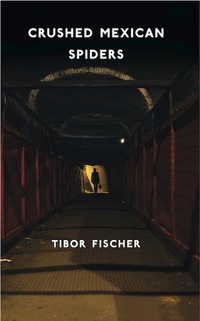 This book has 1 review with an average rating of 5 stars.

Taken from Metaliterature.blogspot.co.uk with the author's permission.

Just who Fischer thinks he is, first attacking Martin Amis and then telling me, his earnest reviewer, that “...most books reviews aren't very well-written. They tend to be more about the reviewer than the book,” is an interesting question, and, frankly, one I don’t care much for. Me. I don’t care. I have other views too, which may or may not come out in the course of this review of a double-header by Fischer from the wonderful, wonderful people at Unbound. Okay, so I’m stuck in 2003, but then it was a nice place to be, with anticipation building at getting my hands on first a proof of Yellow Dog and then a pristine signed copy of Voyage To The End Of The Room. After 2003 it all felt a bit of a letdown, with the bathetic release of both to muted praise and fierce criticism.

Still, I must focus on pastures new and not on muddy old fields.

A quick word (you know what that means) about Unbound. The theory or model is that by securing an agreed level of support from the public, that is you and me and him and them etc, before the book is published, an author and the publisher are able to off-set risks and cover costs, whilst also being able to create a book of rare beauty with a high quality design and, as mentioned in the Guardian, “paper so creamy you long to lick it”. The bonus for us literati is that one gets one’s name printed in the book as a supporter, and if you’re particularly energetic in promoting a particular title or author, by spreading your personalised link to all and sundry via whatever social media site you choose, you may even become a Promoter, earning credits (for use against future projects) for every supporter one convinces to pledge a contribution to a project. Copacetic.

And so on to my first fully formed fiction from Unbound. Depending on which way you pick it up, you may or may not get Crushed Mexican Spiders first, so that seems as good a point as any to start projecting my own insecurities

In a very short story, barely 14 pages long, Fischer goes after London, a city with which he has seemingly fallen out. In a Guardian interview in 2003 (sigh) he says:

“London has become a much more unpleasant place than it used to be. I don't think that's to do with any kind of recent climate of fear, it's just that nothing works. There are just too many rats in the rat cage now.” His nameless protagonist struggles no longer against the apathy of the city, and is rewarded with a cold shoulder which borders on the Kafkaesque. Her key doesn’t work, her neighbours aren’t the neighbours she remembers, and there’s a woman in her flat who says she’s lived there for seven years. Are her memories false (of crushing a neighbour’s Mexican spiders) or is she simply forgotten? It’s dark and uncomfortable reading, and plays on our fears of lives passing unremembered. Not much to laugh at there, but then Fischer likes to challenge himself, and it is this constant newness of his writing that is quite so appetising. Like another superb British author, Glen Duncan, who can make even the same old same old something fresh and invigorated, Fischer does not dwell on his laurels.

Compare with the flip side story, of an eye-witness to the sacking of Troy. An old tale, reborn, and as disparate a setting from the cold darkness of Brixton as one can imagine. With more of the old humour returned, the narrator, under unnecessary threat of torture (for he is willing to tell all) tells a tale straight out of the Barth oeuvre of an alternate history, where Menelaus is marooned on the shores of Troy and is accepted into the Trojan court to fulfil a role as the courtly butt (of jokes, wine, roasted pigeon and, suggested but not confirmed, rogue Trojan noble seed). When he gets tired of this life, he plots to return home with Helen, with whom Paris is now bored, and his trusty and dispensable retainer, whose reluctance to burn Troy to the ground is not a barrier to random chance firing the hollow horse filled with incendiaries. Cute, curt and entertaining, it bears comparison with Sumerian pottery and Hungarian basketball players.

Fisher is an author I would make time for at every new publication. I might even read articles in the newspaper if I saw his name attached. And in conjunction with the lovely people at Unbound, with whom I suggest you make an immediate connection (preferably via this link to Letters of Note, another book so worth supporting it makes Libyan Independence seem trivial), I would hurt kittens if necessary. Go buy, read, support, tell everyone etc etc.

And lastly, simply because I couldn't find a way to slip it seamlessly into the review anywhere else, here's a great quote from the same Guardian article by Fischer about Martin Amis, and the shame he felt after years of defending Amis from attack, only to be greeted with Yellow Dog:

Get reminded when this project is nearly funded

Enter your email address and we'll send you a quick reminder when this book reaches 60% and 80% funding.

Signed - SOLD OUT / Sold out

Launch Party - SOLD OUT / Sold out

Launch Lunch - SOLD OUT / Sold out