The Signalman: a ghost story for Christmas 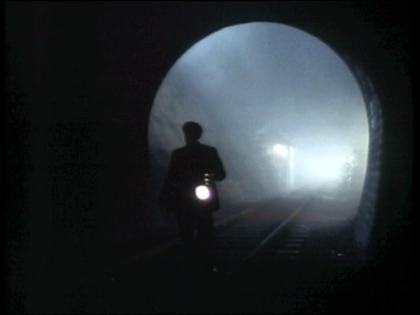 The Signalman is a BBC television adaptation of the 1866 Charles Dickens short story 'The Signal-Man’.

It was filmed as part of the 'Ghost Story for Christmas’ series; a sequence of short films broadcast sporadically since 1971.

The series was developed in an effort to keep alive the - now mostly forgotten - British tradition of telling supernatural tales at Christmas.

The Signalman, filmed in 1976, tells the story of a railway worker haunted by a spectral figure that appears on his rail-tracks whenever disaster is imminent...

I feel I should point out that my commentary of The Signalman does contain 'spoilers’. (In fact, it tells you exactly what happens all the way through the film. So, I suppose, really, I’ve entirely spoiled it - sorry about that...) 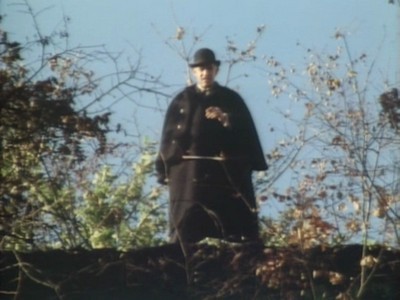 0.42. A solemn-looking rambler with a walking stick and natty cape is ambling about a field, until he suddenly stumbles across a country railway station.

0.45. The smoke from a steam-engine drifts across a nearby a railway arch.

1.23: The camera pans down on a figure standing motionless by the side of the railway track.

1.25: “Hello, below there..!” yells the rambler, shaking his stick about. (So far, it feels a bit like one of those train-safety public information films from the 70s, accept without the cockney children wearing shorts over their tracksuit bottoms.)

1.33: The camera pulls in on the man on the railroad track - it’s TV’s Denholm Elliot in a Victorian train-guard’s uniform!

2.30: Denholm says nothing, but continues glowering back at the man, just as a steam-train, with over-worked engines, chugs out of a nearby tunnel and rumbles by.

3:28: “I saw you from above, and couldn’t help watching...” says the man, clambering down the hillside. Denholm steels. (Fair enough - as an opening gambit, it really isn’t the best.)

4.34: “I thought perhaps I had seen you before,” responds Denholm finally, pointing at an orange lamp by the side of the tunnel. “Over there..?”  The rambler throws his head back and laughs at this rank foolishness: “My dear man, I have never been there before in my life!”

5.10: With the whole lamp-based misunderstanding now cleared up, the two men head off to Denholm’s guard-house and, pulling up chairs to the hearth, settle in.

7:34: Midway through a conversation about how he manages to pass the time (reading, if you’re interested), Denholm pauses and looks across at a bell - which isn’t doing anything, apparently conspicuously. With a grim expression, he gets up and ambles across to the window.

9.30: Another train rattles by the station-house. As its last carriage disappears through the mouth of the tunnel, the orange lamp can be seen through the vaporous trail of smoke, glowing ominously. (It really is a very ominous lamp.)

10:22: Denholm returns to his chair to discover that his companion has fallen asleep (not unreasonably, considering the conversation). Like the terrible host he is, Denholm wakes him and demands to know why he has come. The man responds, groggily, by saying that ‘he was drawn’.

10:38: Satisfied by his companion’s odd response, Denholm mooches to the kitchenette and fixes a cup of tea.

12:00: After a moment’s idle chat about train wrecks - culminating in Denholm developing a far-away look and muttering whimsically that 'in a crash the train tunnel becomes like a smoke flew’- his visitor decides it might be a good time head back to his inn.

12:50: The two men decide they will reconvene the following night. (Evidently, they are both extremely hard-up for company.)

13:28: Before they part, Denholm fixes the rambler with a squinty eye and asks if he thought the words "Hello, below there...” may have been conveyed to him by some supernatural means. The man shrugs: “I may have said something to that effect -” “No!” interrupts Denholm. “They were those exact words – I know them well.”

15:30: The following night, the two men meet once more by the train track – and say “Good night” to each other in greeting. Clearly, they’re both very socially-awkward people.

16:00: Back in the guard-house, Denholm tells his visitor that he had mistaken him for someone else the previous day - but he doesn’t know who that person is and never saw his face...

16:35: Denholm explains that he saw the figure only once, beneath the lamp, but one arm had covered his face, whilst the other was violently waving. The rambler responds: “as though to say 'my God, clear the way!’”  (Er...yeah, I guess.)

17:00: Flashback. Denholm is staring out at the foggy train-tracks from the guard-house window, hearing a voice calling out “Hello, below there...” repeatedly.

17:50: With his trusty bulls-eye lantern in hand, he heads out to the tracks and has a quick shufty about - but can’t see anyone...

19:25: Back in the guard-house, Denholm becomes visibly more flustered, as his visitor explains that, in his loneliness, he probably just imagined the voice - and tells him not to abandon his reason. (Oh, the arrogance!)

20:08: More flashbacks ensue, and Denholm explains that within six hours of hearing the voice 'a memorable crash’ took place on the line. From his expression, it’s clear that memorable crashes are the worst type of crashes.

21:59: As smoke pours out of the tunnel’s mouth, a league of coughing extras in hats are removed from it on stretchers.

23:00: “A remarkable coincidence, my friend!” remarks the rambler, adding, without any apparent irony: “But we are men of good sense.”

23:45: Flashback. Denholm is whiling away another morning by staring across at the red lamp outside the tunnel - when, suddenly, he notices a dark figure standing beneath it.

24:33: Heading over to the figure, it suddenly drops its arms to reveal a perfectly white face stretched into a helpless leer, its mouth gaping open... 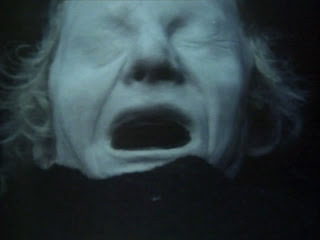 24:35: Most train-guards would have chastised the man for this horse-play next to the train-tracks, and demanded he take the silly mask off – but, instead, Denholm pleads with him to let him know where the danger is.

25:00: Suddenly, a steam-train whistles at him from inside the tunnel and Denholm leaps out of the way. As he limply waves about his red flag, one of the carriage doors is flung open and a woman in a wedding dress is thrown onto the sidings...

26:25: No one likes resorting to a dead bride anecdote - but, with it, Denholm has finally got his companion’s full attention. Getting up to do some train-guardy stuff (pull levers, ring bells – there’s really nothing to it), he says faintly: “Now, sar, mark this, the spectre came back a week ago...”

28:26: The rambler asks Denholm to go with him to the window and look across at the lamp - to see if the spectre is there. It isn’t.

29:36: Returning to fireside to anguish over his problems, Denholm hits out about the spectre’s entire operation. And he’s right to - what’s the point in warning him about non-specific danger - that’s really no system at all! This ghost is a prick.

30:34: The rambler tells him not to worry about it - “You can’t be called upon to interpret these signals!” Denholm squints, and then, finally, acquiesces.

32:01: The rambler bids Denholm farewell and heads off back to his inn for the night - telling him he will come again.

33:35: It’s now the following morning - and a series of quite protracted montage scenes ensue, in which we see that both men are going about their business, whilst indulging in a bit of casual whistling. (When will they learn...?)

34:07: Suddenly, the rambler stops in his tracks and presses his finger to his ear. Turning, he then pegs it off across a hill.

34:36: “Hello, below there...” calls the ghostly voice - as a spooked-looking Denholm pricks up his ears and heads cautiously to the window of his guard-house.

34:58: Denholm walks towards the glowing red lamp - but the spectre is nowhere to be seen. Though its voice can still be heard calling out - now it seems to be coming from within the tunnel. Clearly, the best thing to do in this situation would be to pad nervously about on the train-tracks. And that’s exactly what Denholm does...

35:47: The rambler reaches the top of the grass verge by the top of the railway arches and sees Denholm standing in the mouth of the tunnel. “Look out!” he advises.

35:49: Denholm ignores him and, instead, continues to stand in front of the oncoming train. Presumably, he’s got some sort of plan...?

36:18: Getting down from the hill, the rambler approaches a train-driver who is standing over Denholm’s twisted body on the railway-track. “What happened?” asks the rambler - presumably rhetorically, since he just saw what happened.

36:35: Turning his back to the corpse on the track, the driver breaks off mid-explanation and wanders off to the wall of the tunnel and stands below the red lamp.

36:51: “I was saying 'hello, below down there...’ and I was waving at him!” Standing beneath the lamp, the driver goes on to demonstrate his waving style - putting one hand across his face and throwing the other violently about. (Most people probably would have left it at: 'and I was waving to him!’ - so it’s nice that he goes through the motions again here!)

37:27: Back to looking solemn on the hillside, the rambler turns and - in a close and heavy fog - departs the scene. That was a shit holiday. 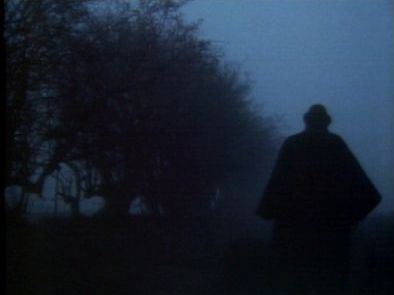