Over the last few decades, I have taken it upon myself to watch a lot of British horror films.

Somewhat inevitably, you might think, this has led me to become a flighty, nervy sort of fellow - but, also, one that can make little sense of the modern world.

It is, after all, a world with too few cobbles, horse-drawn broughams or lunatic asylums for me to comfortably comprehend...

Lon Chaney Jr, the star of classic American horror movies The Mummy and The Wolf Man, once claimed that "the making of a good horror movie isn’t an exact science" — but he was wrong. In fact, horror films were perfected, in the United Kingdom, in the 1970s…

Here, presented for the first time outside Mark Gatiss' video cabinet, are five of these flawless chillers.

Jack the Ripper’s daughter (Angharad Rees) spies her ludicrously-moustached father strangle her mother, before throwing himself into the Thames, pursued by an angry mob of stage-school Cockneys, carrying lighted torches.

Orphaned, she is taken in by the poncey Dr. Pritchard (Eric Porter). However, the poor girl has grown up with issues - and now resorts to murder whenever she is confronted with either ‘hands’ or ‘fire’.

Pritchard hopes to make a name for himself by curing the girl with Freudian psychoanalysis. However, since the opportunity of seeing either hands or fire is less than rare, loads of people get killed, usually whenever the Doctor turns his back.

Surprisingly large amounts of blood in this one, actually. People get impaled on things, fall on swords, and then, of course, there’s the classic (industry-standard) mirror stabbing and hatpin in the eye.

Well, of course this is the ’70s, and a film wouldn’t be film without a quick glimpse of some milky, female flesh. Fortunately, that’s all we get.

This is a Hammer Horror film of the old school tradition, and therefore it mixes competent filmmaking with a dull, predictable plot.

However, it is nice to get a bit of closure on that Jack the Ripper mystery. Apparently, he was just someone’s dad... 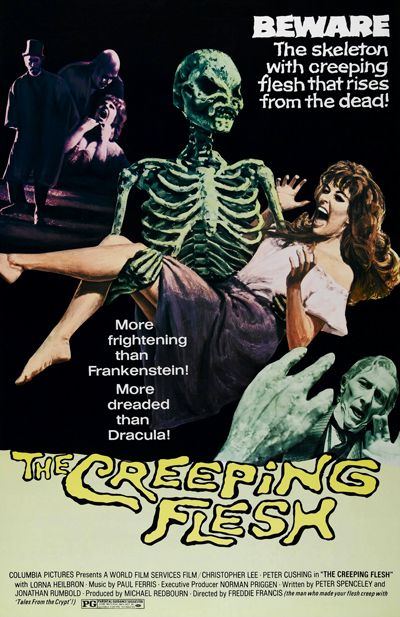 Professor Hildern (Peter Cushing) returns to London with a skeleton unearthed in New Guinea. He hopes it will help him discover the origins of man, but — would you believe it? — it turns out to be the remains of 'Shish Kang', the Evil One.

Hildern’s jealous, half-brother James (Christopher Lee) — fresh from routinely beating up the inmates of his asylum —  writes to Hildern to tell him that his wife has died. He travels to the Professor's house, and a lot of shouting ensues.

Meanwhile, the rubber skeleton of Shish Kang, reanimates itself somehow, dons a cape and then also takes a quick constitutional to the Professor's house. When he finally arrives, he politely knocks at the door (?) and waits to be entertained. Ignoring the courtesy, the two lads answer the door and start a fight with him.

More shouting, and some things burn down.

“Do you believe in evil, Doctor? I do not mean evil as it is commonly understood. I mean evil as a living organism...” Cushing demands from Lee, at one point.

Yet, it turns out that evil incarnate just wants to get the finger back that Cushing nicked off him earlier in the film.

He is quite ugly, though. Think of Eastender's Dean Gaffney, with a touch of conjunctivitis.

Well, the skeleton’s skinny rump is on display for most of the film, but otherwise, it’s all quite tame. However, some rather childish laughs are there for the taking, thanks to the inclusion of Shish Kang’s phallic missing digit.

Well, obviously, there are some points you’d prefer to have cleared up — like what exactly Shish Kang actually is, and how he comes to have magical powers.

Also, for all his apparent ‘evil’, he doesn’t actually do anything particularly bad, preferring instead to ramble around the English countryside.

Maybe, he smells evil, who knows?

It’s 17th-century rural England, and roguish simpleton, Ralph (Barry Andrews), is ploughing the lower field, when he uncovers the bony remains of ‘a fiend’. And we know it's 'a fiend’, because we're told it is.

Whatever it is, it’s got a worm crawling across its one remaining eyeball.

Later on, Ralph returns to the field with a visiting Judge (Patrick Wymark) and they discover the thing is missing.

Meanwhile, local squire, Peter (Simon Williams) swans about with his blushing bride (Tamara Ustinov). Despite their recent marriage, his prim aunt (Avice Landon) insists the girl sleep in the unused, attic room — where she is instantly attacked by something lurking under the floorboards, and driven quite insane.

The next morning, Peter catches a glimpse of her hand, which has been transformed into "some manner of bestial claw".

At the same time, a load of 35-year-old school children hang around the some church ruins dancing badly, in an effort to conjure up the Devil. Instead, they grow enormously hirsute.

They also have possession of the now fully uncovered fiend. And we are told he's missing a leg…

At one point, Wymark intones gravely that he will be forced to deal with the evil forces by way of strange "undreamt of" means.

In the end though, he just turns up at the ruins and kills the ‘fiend’ with the use of some dogs and an enormous sword.

Plenty. A load of local schoolgirls (who all look like your mum’s friends) turn up and put on a rather slapdash series of dance licks — in the nude. Sagging flesh and choppy legs, one an’ all.

The fellas all strip off as well, but luckily for the viewing audience, they are all taken over by ‘The Devil’s Skin’, and as such, hide their chaps under He-Man-style furry pants.

I'd say the main message seems to be that if you're hairy, you're in league with the Devil. 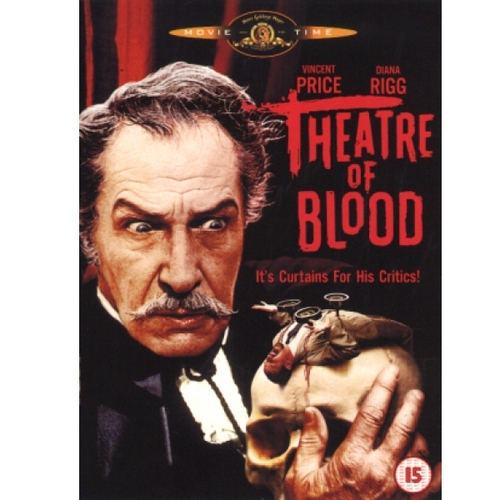 A bit unlikely, this one.

A demented Shakespearean actor — with an excellently stylish name — Edward Lionheart (Vincent Price) adds murder to his repertoire when he takes his revenge on the eight critics who slighted him, ruining his career.

His loyal, equally disturbed, and rather delightful, daughter (Diana Rigg) aids him in his hopelessly contrived plan, which involves using Shakespeare’s plays against them.

So, basing a murder on Julius Caesar, one of Lionheart’s critics is stabbed to death during the ‘ides of March’. Another killing, based on Cymbeline, sees a critic despatched by having his head sawn off whilst in bed with his wife.

In one particularly unpleasant episode, Lionheart uses Titus Andronicus as his model and forces Robert Morley to eat a pie made out of his two beloved poodles - which he refers to throughout as his ‘babies’. The big fool.

The Lionhearts are also aided in their crazy schemes by a bunch of enraged tramps — who happen to occupy the adjacent sewer to them.

Oh yeah, the orange blood abounds in this one.

Watch out for the police (who are all suspiciously well read) as they turn up at the various murder sites and look oddly disinterested by the bizarrely mutilated victims.

During the poodle-eating scene, we are privileged to see one of Bob Morley’s tits.

Also, a couple of the tramps reveal their unkempt bras and pants.

Yes, there is clearly a point to this one.

It seems to be an excellent opportunity for Vincent Price and Diana Rigg to ponce about in a succession of silly wigs and get paid for it. Which is probably pretty good work if you can get it.

Several. All of which are fairly unfathomable.

The head of a psychiatric institute (Donald Pleasance) leads a visiting doctor around the wards, whilst telling the stories of four of his patients.

The audience is first shown a dysfunctional couple, who seem to continually argue about their young son’s imaginary friend - an invisible tiger. But, the big shock comes as we discover that the tiger isn’t actually imaginary at all. (Yep, it's a regular Tales of the Unexpected think-piece!)

The second is the story is of an owner of an antique shop (Peter McEnery), who begins living a strange double life, courtesy of a penny-farthing bicycle, and a photograph of his ‘Uncle Albert’, which moves occasionally. Some other stuff happens and the shop burns down — all for no readily apparent reason.

The third instalment is truly excellent, and involves Joan Collins finding her marriage — and life — under threat from a tree. (Really!)

And, lastly, the story of a publicist (Kim Novak) who arranges a dinner party for her client, but unwisely leaves the dinner preparations to the client’s mysterious, exotic, companion (Leon Lissek). With the end result that Novak’s daughter ends up on the menu. Oh well, at least it's not some foreign muck.

The first of the stories is rather perfunctory, but is also the most bloody. The shot of the child sitting calmly on the floor, as his parents are dismembered in front of him is...nice.

The film really needs this story, however, because the next two make almost no sense at all.

In the final story, we are subjected to tremendously ugly people’s terrible table manners, which I personally found hard work.

In fact, Collins suffers a range of indignities in this film which really have to be seen to be believed, from her wardrobe (the baby-doll nightdress and hair ribbon ensemble is a winner) to her ultimate fate, where despite her efforts, she actually loses her husband to the tree.

That said, it’s a bloody nice one.