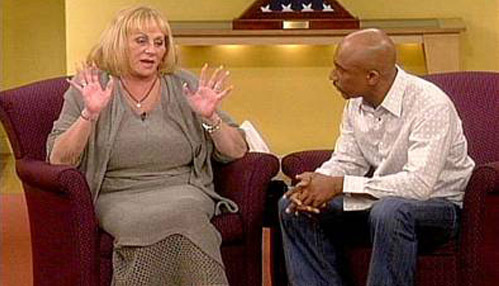 A year after Amanda Berry disappeared in Cleveland, her mother appeared on CBS’ The Montel Williams Show to speak to a psychic about what happened to her daughter.

Sylvia Browne, who has made a career of televised psychic readings, told Louwanna Miller on a 2004 episode of the show that her daughter was dead, causing Miller to breakdown in tears on the show's set.

"She's not alive, honey," Browne told Miller. "Your daughter's not the kind who wouldn't call".

Louwanna Miller died from heart failure a year later - and was, consequently, never reunited with her daughter, who only escaped the home of her kidnappers this week.

In 2003, Browne also incorrectly told the parents of missing teen Shawn Hornbeck that their son was dead - telling them that (according to her spirit guide) his body could be found somewhere near 'two jagged boulders'.

Nearly four years later, Hornbeck was found alive - and Browne was widely criticised in the media for causing the Hornbeck family additional grief.

He said to reporters: "I know her parents are convinced Maddie is alive and I'm really sorry - but the little one has been over in the spirit world for some time".

This was picked up by a number of national and international newspapers - and the story was said to have greatly distressed the McCann family.

Although stopping short at actually stating that the girl was dead, Power told reporters on March 8th: "I can see a lay-by near farmland".

A week later, the girl was found alive and well in the home of her step-father’s uncle.

Power’s own - revisionist - account of his part in the Shannon Matthews news story can be found in the 'casebook' section of his website.*

(*You can read a fuller review of the discrepancies in Joe Power’s account of the 'Shannon Matthews case' here.)

It's a good crowd round these parts!