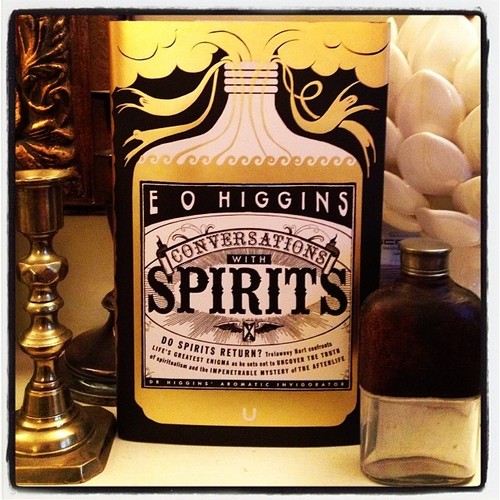 Instead of a memory, I have this crib sheet. But it occurs to me that I may have actually forgotten to put things on the crib sheet. So it's not a perfect system.

Well, welcome everyone to the launch – and thank you for coming.

I was talking to my Mum on the phone about tonight, and she said, "Oh, it's a long time coming" – and I asked her what she meant.

Apparently I started writing my first book when I was six years old. It was called The Past House - I’ve always been very good with titles – and it was about a haunted bungalow. According to my mother, it was a bit thin on plot and mainly involved the protagonist falling on his arse and splitting his trousers...

I like to think that if you've had a chance to read any of Conversations with Spirits already, you'll be pleased to see that I’ve barely moved on at all in the succeeding thirty years.

There's an entire roll call of people that I need to thank here tonight. But I shall start with the two main ones, Jack Lenox and Isobel Frankish.

Jack is the creator of the brilliant writing community Jottify, where I initially uploaded the book, and Isobel was the commissioning editor at Unbound who discovered it there.

I can't imagine it was a particularly easy ride for either of them. Anyone who knows me knows what a deeply angsty, flighty, pain-in-the-arse I am. And I remember when we got to about 50% of my funding target and things inevitably started to slow down as new projects came onto the website, I called up Isobel in something of panic and asked her what we were going to do...

"Don't worry," she said reassuringly. "I've got a few ideas to help publicise the book." "Great," I said. "What are they?" "Well, firstly we're going to do a flash-fiction competition on Jottify…" "Brilliant!" I said. "And then you're going to perform a séance!" "Of course," I replied. "A séance! That's a great idea!"

It was only when I put the phone down that I started to hyperventilate.

So it came to pass, that on Hallowe'en last year, I performed a fairly thrown-together séance in a Georgian drinking club in Soho, armed only with an orange tan, a box of rubbish magic tricks and a number of glued-on goatee beards.

Looking back, I can see that this was clearly a ploy by Isobel to focus my mania in whole new area – and, thus, get me off the telephone.

I need to thank my design and production manager Cathy Hurren too. She and Isobel have delightful sort of nice cop / nasty cop dynamic. And Cathy did a very good line in never standing for any of my bloody nonsense. She always met my whimpering with the consummate anger of a true professional.

I'd like to thank Caitlin Harvey too – who does all manner of behind-the-scenes things at Unbound. She's kind of like the puppet master. She also very kindly left the room when I came down to see the hardbacks for the first time last week, so that I could have a little cry.

Also, Xander Cansell who put together the eBook - so if you’re cheapskate and that's the version you've bought, you’ll have him to thank for making it look so nice.

And the delightful PR team - Rachael Kerr and Emily Bryce-Perkins.

And, also, the founding members of Unbound – Dan Keiran, John Mitchinson and Justin Pollard; who have just been infinitely charming and supportive all the way along. And they created Unbound, which – though I may be terribly biased - I genuinely think is an amazing thing and definitely worthy of your support.

I also need to thank Kris McManus who made the stunning pitch video that went on the website; Simon Waller who had the dubious pleasure of taking photos of me in the bath for my author picture; and Mark Ecob who created the fantastic cover design of the book.

I know you're not supposed to judge a book by its cover. But I think in this case, it's fine...

My girlfriend Katie has asked me not to mention her. She reckons this is because she's shy, but really it's because she's worried I'll make a terrible tit of myself tonight – and, by identifying her in this way, I'll just be alerting the bar staff to who it is that has to take me home at the end of the evening...

Finally, I would like to thank my friends and family that are here tonight, and basically everyone that's pledged. Without your support, faith and - let's face it - cash, Conversations with Spirits would never have happened.

You've also made me feel very happy, proud and honoured. And finally – and for the first time in my life – you've put my big head in context!

So thank you all.