In Bed with Chris Needham

“All you fogies and old people may as well switch off now!” 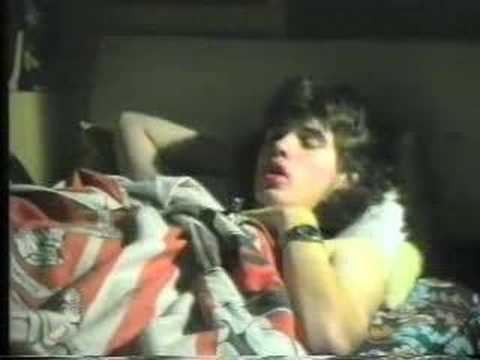 Today, I have spent my lunch break feverishly trying to contact a man, who for a long time now, has been a great personal hero.

That man is Chris Needham.

Chris – as you no doubt remember – was the 17-year-old star of BBC 2′s fantastic Teenage Diaries back in 1992. More specifically, Chris (never a man to shun the spotlight) was the star of his own teenage diary In Bed with Chris Needham.

The show was a fantastic 45-minute preamble around Chris’ life, and his home town of Loughborough, in which we saw our hero:

— get bollocked by his AS teacher (Mr Tennon and “his shirt”)

— rally against ‘the greens’, charities and old people

— get arseholed on Skol lager

— and talk about his love of thrash metal – “some of the finest musicianship in the world – imagine being able to play an instrument that fast!”

Chris was pure metal. From his ghastly pallor (his skin’s the colour of cheap soap) to his home-done mullet haircut and flimsy moustache, all the way to his python-tight denim slacks…

But, unlike most seventeen-year-old metal musos, Chris wasn’t willing to spend his days holed up in his bedroom playing along to Slayer records on his Fender Stratocaster (copy). Mainly this was because his finger-work was a bit ropey – but also because he was the mouth-piece for a whole generation. And, now, with his camcorder whirring, was his opportunity to stick his views to ‘the man’…

“Youth is a damned culture. You should see how disparaging the state of today’s youth is.”

“When I watch telly and there’s wars going off everywhere, I realise I have no earthly power to do anything about it! There’s nothing I can earthly do!”

“If you wanna be green, you go out and do it – but, for me, it’s been overkilled. You can go out and burn this planet – it’ll be your fault.”

CHRIS ON HIS MATE GREG GETTING A LOVEBITE:

“How many billions of women are there out there? Fifty-three billion? More! To get involved with a woman in a relationship of that magnitude at this sort of age is mad…”

CHRIS ON THE WEATHER:

There are some fantastic comic moments in the documentary too. Considering the credits attribute ‘full editorial control’ to Chris, there are some bits that make you ask either ‘what was he thinking?’ or question if, instead, he was being somehow manipulated by the suits at Broadcasting House?

In one memorable scene, Chris and his faithful Boswell, Greg, are padding through Loughborough city centre looking for things for Chris to pass judgement on. Walking by Radio Rumbelows’ window, Chris spies Neighbours on a television screen. Inspiration hits him:

“Why do people watch Neighbours? It’s like the TV equivalent of a McDonalds meal, isn’t it? – straight through.”

This scene then cuts –  without any apparent irony – to Chris and mate Greg eating burgers in a fast-food establishment! Chris duly shares his thoughts on vegetarians, speaking through a gobful of semi-masticated burger meat.

“Vegetarians say ‘do you realise you’re eating a dead animal there?’ and I say ‘Yes, I do as a matter of fact – and I’m enjoying it!”

Pow! Take that, vegetarians! You idiots!

Then there’s the moment when Chris has hushed, confidential words with Greg (although, obviously, still on camera) about the “certain items that were in his top drawer.” It turns out that Chris is alluding to a pack of condoms that himself and Greg have bought together (a bit weird), and which someone has fished out of Chris’ pants drawer and thrown across his bedroom. Chris is livid. And he instantly blames both Greg and his girlfriend, Jane – before having it pointed out to him that it might, more reasonably, have been the work of Chris’ seven-year old brother who lives in the same house as him.

Clearly, this whole section has been included to get across the idea that Chris may be ‘getting some’ – and, thus, highlight his sexy credentials as the lead vocalist in Manslaughter. (Considering, when we do meet Jane, she does nothing but silently accept gifts from Chris, whilst intermittently thumping him in the chest, it’s not altogether too clear if he is quite the crazy, lover-lover man after all!) 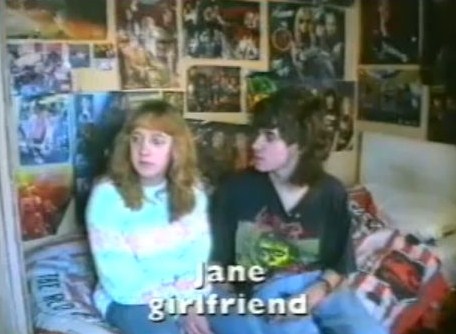 The rehearsals are excellent. We get to hear a rendition of ‘Hate Song’ performed in Chris’ bedroom with Greg accompanying him on a small Casio keyboard. At the end of the ‘set,’ Chris unselfconsciously grabs the air and bellows: “Feel sudden death from my guitar!”

It is something to behold.

Then there’s Andrew, Manslaughter’s drummer (poor Andrew), who – sitting on his drum stool twirling his sticks —explains to the British viewing public that:

“I’ve been drumming since I was about four years old, when my parents took me to a hobbies night at school where there was this guy with a drum kit – and I (casual yawn) basically took to it like a duck to water.”

Without further ado, Andrew smiles enigmatically into the camera and tells us: “watch this.” A restless drum-roll displaying a stunning lack of skill and coordination ensues – it sounds rather like two differently-sized football boots kicking around the inside a tumble dryer, followed by an obligatory hit on the cymbals. Even Andrew appears shocked by the tawdriness of his abilities. He covers quickly:

Soon afterwards,  Andrew is dropped from the band and replaced by the bass player. Who, in fairness, does do a better job, despite not having Andrew’s pedigree…

As the day of Manslaughter’s first gig beckons, things turn black. We hear Greg voice his concerns of Chris’ depressions, whilst watching footage of Chris’ lonely figure struggling by a frozen lake.

Chris, himself, explains that he has been unsettled by a lager-induced nightmare he’s had, which harrowingly involved mists and a graveyard (you know, like a heavy metal video might). Perhaps, most ominously of all, we witness what would appear to be a rare moment of clarity for Chris, when he suddenly speculates that getting a bunch of his mates together – none of whom have much in the way of talent – might mean that their first gig isn’t as well received as he has always assumed it would.

At his lowest point now, Chris cancels the gig…

However, the black dog is fortunately not with Chris long – and Manslaughter’s first gig goes ahead as planned. And although Chris is initially horrified that the fourth years might be allowed in (that’s right, it’s a school gig), everything goes fairly well.

Unbelievably, Manslaughter (or possibly the chance to appear on television) draw a big crowd and the ladies are going crazy for Chris Needham’s stage craft. He is a blur on the stage, his army fatigues are ripped open to display his pale, skinny chest and he’s singing a cover of AC/DC’s You Shook me all Night Long, whilst pumping the air, performing scissor kicks and dropping to his knees…

Afterwards, Chris has time to reflect on the performance – which, for some reason, he decides to do from within the cubical of a public convenience. (Presumably, this was the band’s dressing room.) Buoyed by the gig’s success, Chris gives himself and the rest of the band a glowing appraisal. Then – in a slightly eccentric moment – pulls the handle on the toilet. The water from the toilet jets out and wets the arse of Chris’ stonewash trousers and so he ends his evaluation leaping from the porcelain and gibbering: “I don’t believe this!”

It took me a very long time to get hold of my copy of In Bed with Chris Needham. In the end, I had to email various people at the BBC and plead with them to run me off a video copy. Which I’ve now watched so many times, I have all but eroded the plastic…

You people, however, are lucky. Because a very nice man has uploaded the whole thing onto YouTube. And you can watch it for free here. Enjoy!

Chris has not been idle all these years either – he’s still out there pushing the Needham brand. You can view his MySpace page here (which contains some of his solo material) and he has also set up a Yahoo! Group for his fans, in which he shares news and posts contemporary photographs.

Reassuringly, Chris is still metal to the core – it’s just that that core is further away from the surface than it used to be. 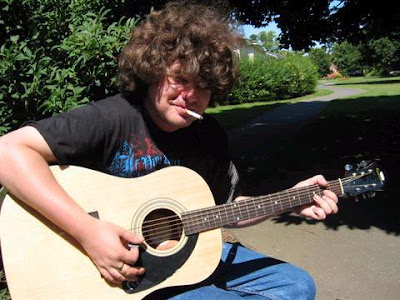 It was on theYahoo! group last week that I discovered the tremendous news that Chris is apparently in the process of filming a follow-up documentary. Provisionally (and mysteriously) named ‘Sour Mash Preacher,’ Chris is now double the age he was when the first documentary screened. Think of all the brilliant new ideas that must have formed in his brain in that twenty year period!

The information is very good! He was as sharp as a razor till the end of his life, an unusual and delightfully maverick human being who had even proposed a pretty novel manner of dispersing his ashes. https://cookieclicker2.io