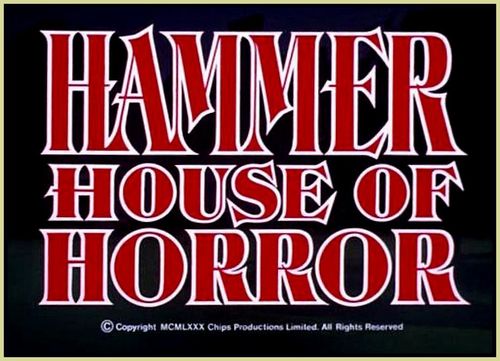 Recovering from last week’s ‘man flu’ (the worst type of flu), I resolved — after two days sloth — not to waste any more time and, instead, take stock of my life.

But it turns out that taking stock of your life does very little to pass the time.

So, I decided that a better course for me was the route of moaning practically unceasingly and watching poor-quality television from the 1980s.

Due to my inability to track down the episode of Neighbours where Paul Robinson has a nervous breakdown, I decided to focus my (not substantial) energies on the output of the Hammer House instead.

As all British people know, Hammer is a name synonymous with horror. If you’re of a certain age (and inclination) then your childhood was almost certainly defined by Friday nights watching Peter Cushing doing battle with Christopher Lee and brutalising a middle-European village. (This was in the days before British stag parties did it.) And, if your cup wasn’t already brimming over, occasionally the likes of Dennis Waterman or Anthony Ainley would blunder onto set in a velvet jerkin and pair of fawn slacks, ready to do some mild romping before being hastily despatched.

The ’60s and ’70s were golden times for Hammer, they produced big-budget, big-screen, British filmmaking at its camp and beautiful best…

However, the vogue for such things as good production values and historical settings seemed to die off in the late 1970s, probably due to the rise in popularity of cheap ‘slasher’ style films. The swishing of velvet capes and fangy mugging at the sun, so beloved by Hammer fans, was suddenly replaced by tracking shots and people in isolated American camp-sites being bludgeoned by the contents of an electrician’s toolbox. For shame!

At Hammer House, the folks didn’t know quite what to do with themselves. In 1979, they made a ‘safe’ remake of Hitchcock’s The Lady Vanishes with a cast of American actors — including Cybil Shepherd and Elliot Gould. It was a sensational flop.

One thing was clear, the good folks at Hammer Films had lost their way…

However, by the early eighties they had cleverly re-invented themselves, making the move from the big screen to televison and bringing their brand of ghoulish storytelling to ITV.

Perhaps the most famous episode of Hammer House of Horror, the television series, is The House that Bled to Death, if for no better reason than the title. 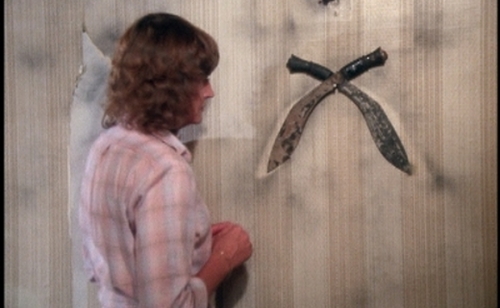 What does happen is that Nicholas Ball (TV’s loveable Hazell) buys a new semi, where (unknown to him) a murder has taken place previously. As a result, he is beset by odd occurrences, including the murder weapon being re-gifted to his daughter at her birthday party, a severed hand appearing and body-popping on the hall lino, blood pouring down the bedroom walls and, most ominously of all, that bloke that used to play Ted Hills in Eastenders turning up and wanting a cup of tea.

My favourite episode is Visitor from the Grave, but, that said, there are very few slouches in the series… 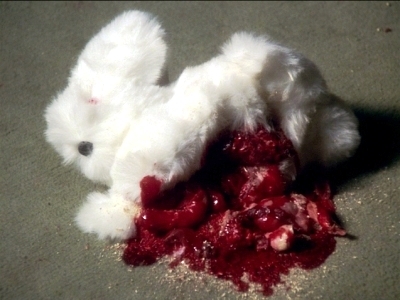 Growing Pains, where a toy rabbit gets cut up at the dinner table and half a pound of chopped liver falls out of it. 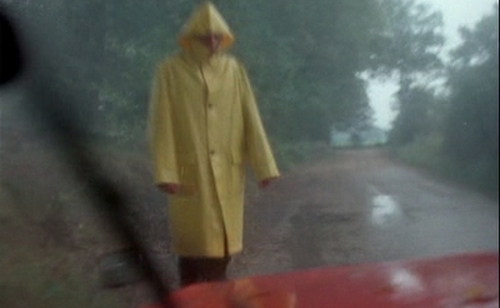 In The Two Faces of Evil, a couple of holidaymakers are terrorised by a man in a yellow Sowester… 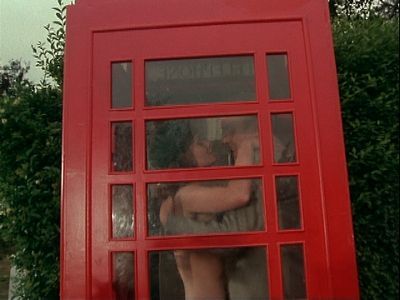 In Rude Awakening, it’s clear from the offing that the production team have come in seriously under time and were, as a result, forced to improvise in order to pad the episode out.

As a result, we are treated to a montage of slow-motion clips from the rest of the episode (including a heavy reliance of Denholm Elliot in a red telephone box) in a baffling pre-credit sequence. That’s the way to do it!

In Children of the Full Moon, Dynasty’s Christopher Cazenove runs up to Diana Dors shouting that he’s just seen a man in the woods turning into a wolf! Dors explains that ‘It’s probably just a stag!” Oddly enough, he completely acquiesces. That's city-folk for you... 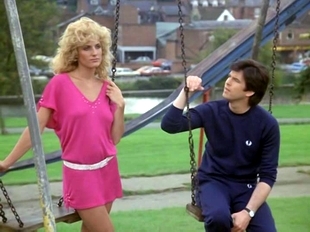 Tony Valentine rocks up in Carpathian Eagle. (As does a very young and very embarrassed-looking Pierce Brosnan.)  In this episode, a murderess spends most of her time sitting alone in pubs and bars, waiting for men to pick her up so that she can kill them. (Brosnan, however, pulls her down the park  – he’s old school). Fair’s fair, this femme fatal does top some serious ‘players’ too. I think the middle-aged man with the bottle of Mouton Cadet and the outsized rubber feet at the end of his bed, gives a pretty good account of himself...

But Visitor from the Grave is simply genius – mainly because it combines a wealth of quality British talent. 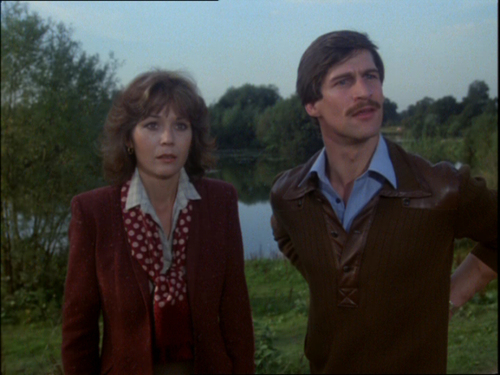 Manimal’s Simon MacCorkindale takes the lead. We know this because he spends most of the time indulging in the actorly pursuits of shouting, flexing his arse muscles (in a pair of excessively tight trousers) and snorting like a Shire horse.

He’s trying to convince his American (read: highly-strung) missus that she’s going crazy, so he can have it away with her cash. The plan is a brilliant one. Stanley Lebor (that’s right, it’s Howard from Ever Decreasing Circles) turns up at their isolated farmhouse in the middle of the night and sets about molesting her! (Howard never did this!) Not unreasonably, she picks up a nearby shotgun and shoots his face off...

‘Corkie’ MacCorkindale comes home and — amid some impressively manful thrusting — cleans up the mess and buries the body in the garden. However, for the rest of the episode, Howard keeps turning up to haunt the wife — in the street, in a car, even dressed as a waiter at a rubbish party (who then turns and legs it with a tray of vol-au-vents!)

For these good reasons, the wife surmises that he isn’t actually dead after all. And, so, MacCorkindale is forced to go back to the garden and dig his body up to prove that he is. Unfortunately, he chooses the exact moment that a policeman - in the form of Blake 7’s Gareth Thomas — has decided to call at the house.

After telling the copper that everything’s fine (he explains that his wife's gibbering is perfectly normal – women, eh!) the policeman drives off satisfied, and MacCorkindale — ever the sensitive soul — grabs his wife’s hand and drags her to the garden — where Howard is lying in a shallow grave with maggots crawling all over his face.

MacCorkindale’s wife now realises that she is seeing ghosts, and although, he doesn’t believe in such ‘poppycock’ himself, Corkie arranges for her to see an Indian mystic that he knows about.

Mind you, it’s going to cost her. Apparently, the mystic lives in India and will only visit her if she says she’ll finance a church in the UK. (This must be how Derek Acorah pays for his dental treatment.) She readily agrees.

The mystic, called ‘Gupta’, arrives at their house, dressed in dark glasses and an outsized turban, and sets about doing Indian mystic type things (i.e. he holds a séance). There’s no messing about — and, within seconds, a projection of Howard’s angry face appears in the middle of the table…

Despite the wife trying to make amends with Howard’s giant face, there’s just no consoling him and he tells her that he will carry on haunting her — forever!

In a state of some disarray, she runs from the room and kills herself.

Back in the living room, minutes later, Gupta pulls off his turban and dark glasses to reveal that he isn’t Indian after all. (A-ha! That’s why he was doing that Welsh accent!) Shockingly, it’s Gareth Thomas again!

With the lady of the house’s body not even cold, the cynical plot is uncovered and MacCorkindale, Howard and Gareth Thomas sit around drinking booze and counting out the money that the wife had supplied for Gupta’s church. (No explanation is given as to how Howard managed to project his face into the middle of the room, but there you go…)

Suddenly, in that way that weak plot devices often assert themselves, as the lads are laughing it up and Gareth is regaling everyone with his faultless Welsh accent again (just in case you hadn’t worked out he was Gupta, despite having just watched him take the costume off), the ‘real’ ghost of the wife rears up in the middle of the room and laughs wickedly at them…

You see, people, this is British storytelling at its best.

Don’t take stock, kick back with a cup of hot Bovril and enjoy…

Watch Visitor from the Grave.